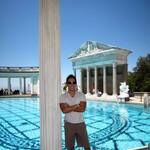 Last-minute trip to Yosemite this weekend

A good friend just acquired some really-hard-to-get permits for Yosemite and we're trying to put together a last minute itinerary.

Here's what we have so far:

Fri
Spending the night at the Quality Inn at Mammoth Lakes. Any good breakfast recommendations?

Sat
Picking up permits from the Toulome Meadows Permit Office, then hit the trail. We'll start near Lembert Dome, and end up at Young Lakes where we'll camp for the night.

Sun
Young Lakes to Glen Aulin. The longest leg of our trip.

Mon
Hiking out from Glen Aulin to Toulome and back to our car.

Anyone done these hikes before? Does the mileage seem reasonable? How are the campground conditions? Are mosquitoes a big problem this time of the year? Would I be insane to attempt swimming in any of the lakes?

Any other thoughts or advice on our itinerary would be great. Thanks!

Nice!! You're going into Yosemite the back way. Which although it doesn't have the "wow" factor when drive into the valley (from the front route) it's so much more peaceful and beautiful. You will drive up through the Owens Valley, which has a dry deserty feel and then when you come over the Tioga Pass, you'll be in the high elevation medows of Yosemite. It's amazingly beautiful to crest the peak and fine yourself in the lush meadows. I'm jealous!!

I haven't hiked it, but here are some things to see along your drive up or back.

Mahogany Smoked Meats is known for the jerky. Beef, turkey, bison, etc. I prefer the pepered bison jerky but the teriyaky is good too. Pick up some of this for your hike. It's not cheap... but it's the best.

Whoa Nellie Deli This place has some of the best food in the entire Ownes River Valley, and it's in a gas station! You can sit outside at their picnic tables and over the Mono Lake. It's a very cool, unique experience you won't find anywhere else. When you get into  Lee Vining you'll turn left to go through the Tioga Pass to get over the moutains. On your left is a Chevron station that is home to the Whoa Nellie Deli. It's a must stop!

Mono Lake is most noteable for its tufa, the tower like deposits of limestone coming out of the water, and for the being the "saved" from extinction because it was being drained to help water Los Angeles. It's beautiful but i wouldn't do anything more than just have a look from the road. The visitor center is nice, but you don't want to spend too much time down there.

Other noteworthy things off of 395:

Stop in  Lone Pine and look up to your left. That's  Mt Whitney you're looking at.

If you want to hop off of 395 and take a very scenic loop, you can take the June Lake Loop. It will add about 30 mins to your drive, but it's breathtaking. You'll see June Lake,  Silver Lake and  Grant Lake. It's very worth it, if you have an extra 30 mins.

Ernest
I didn't realize there was so much to see and do on the drive up, thanks! And dried meats - mmmm…you're speaking my language :)

I can't comment on those specific trails, but I know some great restaurants around the Mammoth Lake area for you guys to pick up or sit down for some meals.

Burgers Restaurant is my favorite lunch spot in town. Great burgers, but the turkey sandwich with bbq sauce to dip may be my favorite. A buddy's dad who used to be a ski host at Mammoth would go here for lunch, then take a shuttle or the gondola in the Village (which is right across the street) back up to the mountain. Now that is a veteran move.

Convict Lake Resort has another great restaurant. Haven't stayed there, but the restaurant is one of the best restaurants anywhere. Special occasion kind of place. 1/2 hour outside fo town, beautiful setting on convict lake.

Petra's Cafe is another great place for a nice meal. Its a wine bar too, so great wine selection.

Lakanuki is a nice apres ski or hike option in the Village. The kitcshy Polynesian theme really works in a ski resort for some reason.

Whoa Nellie Deli. It isn't in Mammoth, but a little north of it in the gas station in Lee Vining. Great food and great fun, having a quality meal at a gas station. If you're making a scenic drive up that way, definitely stop in.