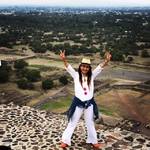 What was your experience with turbulence and bad weather while traveling?

I love to travel! However I hate turbulence so I always try to choose early am flights. Can you tell me a story you had while flying related to bad weather conditions?

I used to like gentle turbulence... it kind of rocked me to sleep on long flights.

After flying 51 times last year, however, a few experiences left me with a little more anxiety. Particularly, one time I was flying into Denver and there was the heaviest turbulence I've ever experienced while on our descent.

You know how they say, "it's not that bad until the flight attendants look nervous?"... well, during our descent it got so bad so quickly that as the flight attendant was walking down the aisle getting trash, she had to strap into (luckily) an empty seat because she almost hit her head on the ceiling during a big bump! Fortunately, we landed fine, but I was sweating for sure.

I've survived the "most dangerous airport in the world" at Tenzing-Hillary Airportbefore and felt less anxiety then... than I did on this Denver flight!

TIP: Besides the plethora of pills you can take and probabilities you can look up about how safe air travel really is, I read once to think about an airplane in air as a speed boat in water. If you're in a speed boat, you will always feel the choppiness of the waves beneath you. When you're in an airplane, just remember you're just bumping over some slightly choppy waves (of air). A plane is at home in the air... and sometimes the air isn't 100% smooth just like a lake isn't always a perfectly still and glassy lake! 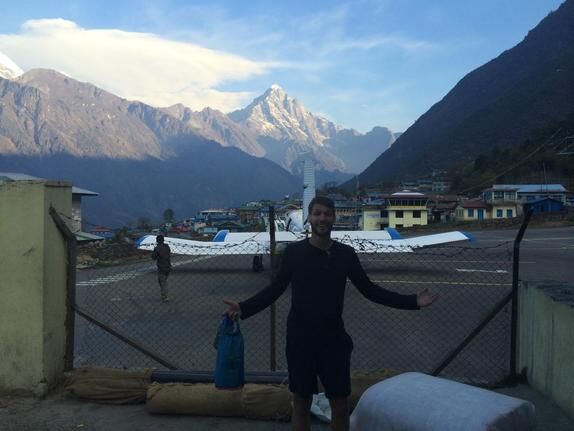 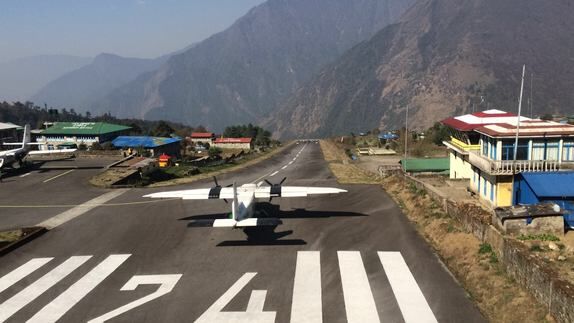 Rocio
Thanks so much for taking the time to answering my question and for sending those nice pics. I will try to follow your advice next time that I am on the air. You inspired me!! :)

I have traveled across many oceans throughout the years. From the mainland USA to Hawaii, on to Fiji, Tonga Islands, American Samoa, New Zealand, and Australia. Across the Atlantic to Scotland, France, and I have always been a bit scared of turbulence. I think certain movies have scared me plus news feed that plays over and over the loss of a plane and everyone on it. I have been in turbulent flights where I decided it was time to pray and just let it go and others where I have seen others become very frightened, even screaming. I don't think I will ever fly without getting a bit anxious. I think the worst was when we try to land in Hong Kong at the old airport which was in the city amidst high rises. The pilot tried to land the first time, but it wasn't working, so he had to try again.

There was this time, flying back from New York to Cancun when rain and wind where hitting Cancun's airport. I think actually the airport was closed or something because we ended flying south at low altitude until   Tulum (which is about 100km south of Cancun). I realized that the city outside my window was not Cancun nor Playa because it was way smaller. Turned to my phone which happened to have cellular signal (imagine how low were we) and gps told me we were off shore tulum. Unfortunately it was night time so I didn't get a pic of tulum Ruins which would be awesome. We just did a U-turn and then we came back north. Rain and wind was over. Maybe is not kind of the story you were looking for but is the only I have. I mean, you never like to feel that but the experience of flying above Tulum worth every single shake in the turbulence 😉

Oh no, there's another one: Once upon a time there was a lot of wind and rain landing in Mexico city and we felt how the plane swing left to right until we landed. The guy right beside me yelled "WORST. LANDING. EVER." and everybody stared at him with, you know, that condescending look like saying "We know, dude. We've been here too, you know?". Just. Relax and enjoy :3

answered by
James from Bon Aqua

My worst was in 1987 when my wife and I were returning from our honeymoon to Hawaii. We were coming in for a landing at Denver's then Stapleton International Airport and a down gust of wind tilted the airplane on to one wing and if it hadn't been for quick action from the pilot, we would have cartwheeled down the runway!

answered by
peggy from Washington, DC

I've traveled the world and have always had high anxiety when we hit turbulance. The worst time was flying from Washington DC to Rome in January one year. We had just finished eating and the turbulance began, so about 2 hours into the flight. This was the worst turbulance I had ever experienced and I completely panicked, including quietly crying even though I know turbulance isn't dangerous. I wasn't sitting near anyone. The turbulance lasted until about an hour before landing. The flight crew was seated the entire time.

Since then I knew I had to come up with a way to calm myself down. For you moms out there I came up with something that works perfect for me. Since the turbulance causes a bumpy rocking motion I now close my eyes and visualize myself in a rocking chair holding one of my babies ( they're grown now) and in my mind I sing to them. I know I sometimes rock with the motion of the plane and people may wonder what I'm doing but it works perfectly!

I was on a plane that was hit by a lightning two weeks ago when I flew between Istanbul and Copenhagen.

It sounded like someone detonated a bomb onboard, but there was no turbulence as such.

I have been reading a lot about aviation as I was scared of flying when I was younger, so I knew right away what it was and did not get scared, but some other people on the plane were really scared, including the people sitting next to me.

I also had an aborted landing in Manila a couple of years ago where the turbulence was so bad that the pilot did not dare to land, but instead shot the plane almost verticl up in the air a few seconds before landing because the plane was taken by some strong winds so the wing almost hit the tarnac while he tried to land. We ended up flying to Clark Air Base instead where we waited a couple of hours until the weather became better in Manila.

I can remember winter high cross-wind landing at Las Vegas McCarran airport on a US Airways flight....I swear the pilot was trying to land the plane sideways....The landing was so violent it was probably the closest experience I've ever had to an actual crash.  Kudos to the pilot!

The weather doesn't have to be very rught for me to feel queezy when turbulance starts.  I found too way to make the symptoms to be less. I try to have a seat as near as possible to the wings.  I feel less the turbulences. I take a Bonine pill.  This medication works bether than other travel sikness drugs, even Gravol And all the side effects.

Yes, I get air sick but it doesn't keep me from traveling.  The destination is worth the risk.

Just had to sit on the runway in Chicago for a long time while they De Iced the plane and wondered what we were going to fly in when we took off.  Better safe than sorry.