My wife and I have two short days in Venice. Most guides we have researched offer a package tour for 3-4 hours with standard stops. We would like advice on an English speaking guide with a great sense of humor that could take us around the city in 5 hours (or more if needed) and visit offbeat locals. Arrive Oct 1.

We also would like a recommendation on a high end (4 -5 stars?) hotel that has spacious comfortable rooms with a balcony. Not concerned about spacious lobby or grand entrance (Gritti Palace type not wanted).

I can speak to the hotel side of your question as  i just spent 3 nights in Venice last week... and it was great. Venice wasn't cheap, but since you'll be there in Oct (a little off season) you might do better than we did.

We settled on the Bauer Il Palazzo because the location was great, but more so because it's the only family owned 5 star hotel in Venice. All others have been acquired by large chains. Therefore you get a personal touch when you're there.

Here's what I would do: If you decide to book there, then reach out to the concierge and let them know you're coming. They can help arrange a tour guide, but more importantly, ask to meet Pietro, the general manager. He's lived in Venice all his life and he was very helpful on our stay. I emailed with him a few times before we arrived and that made it really nice to meet him in person. You can let him your specific needs for the room and since all the rooms are fairly different (this isn't a cookie cutter type of hotel) he will be able to help. AND, if you mention you're heavy contributor to Trippy.com he might even hook you up with an upgrade. He did for us :) in a BIG way. 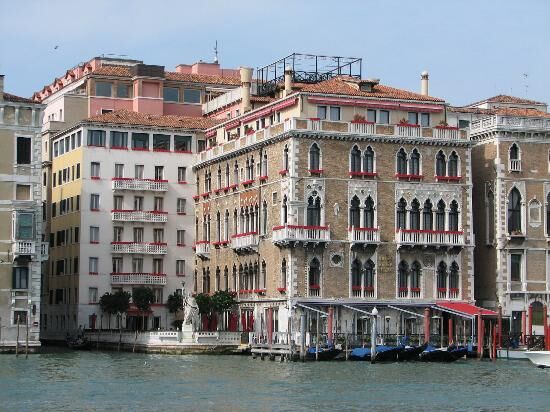 Another highlight was the rooftop deck for breakfast... unreal views watching the sunrise over Venice and the Grand Canal. You can see in the deck above picture.

For dinners, we went to A beccafico which is on a lovely square and frequented by a lot of local Venetians from what we could tell. Also, Pietro the GM said it was one of his favorites which corroborated my brother's (Brew) suggestion here :). Also we went to Bancogiro which was mentioned a few times on trippy as well. We heard it was one the most beautiful canal side views in Venice and it was. Service was fantastic too but all dependent on your waiter. One other place of note that we hit for lunch was on Burano and it was called Trattoria Da Romano. It's know for their seafood risotto which was great.

Linda
Any suggestions for dinner ?

JR
i just added a few restaurant comments to my answer. with a link to my restaurant question as well :) Good luck!!