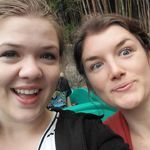 Road trip from L.A to Spokane... Best route(s) and where to stop?

Okay so, I'm planning a road trip from October 28th-November 5/6th with my boyfriend. My sister just moved to Spokane, WA so I thought this would be the ideal time to visit, and what better way than a roadtrip! His friend lives in Salem too, so we wanted to factor him into the trip.

We plan on renting a car, which should be about $500 (give or take) for the rental and gas. We have time to save money before then, so I would say our budget is going to be around $2000?

I haven't been to OR or WA, so it would be nice to see the sights. But its not that lengthy of a trip and I dont want to spend my whole trip just driving. Any suggestions?

Hi Amy, Trippy has one possible route from LA to Spokane, but you might want to adjust it to go through Salem and Portland.

You're looking at 8 or 9 days for your drive, so there are a lot of possibilities. Since you're focused more or Oregon and Washington, you can probably stick to I-5 initially to get out of LA traffic and through California as quick as possible.

Some people suggest going the other way around I-15 for a quieter scenic drive through Nevada, Utah, Idaho and Montana then taking the I-90 West back through Idaho into Washington. But I think for your situation you should stick to I-5 for the first part and save more time to explore farther north.

Assuming you are stopping in Salem, then you should definitely take I-5 straight up to Salem and Portland. From there, it's a question of whether you want to take time to explore Seattle, or if you'd rather just take the 84/82/395 combo into the Pasco/Kennewick area, then up the 395 and I-90 East into Spokane.

If you didn't need to stop in Salem, a lot of people would suggest I-97 through Oregon for a more scenic road trip.

Yet another option is to go from Los Angeles to Las Vegas first, then take 93 up for a historic route to Twin Falls then Missoula and across to Spokane.

Really, the Salem stop is the toughest restriction because that pretty much forces you on I-5 which is going to be the busiest and least scenic route.

Assuming you have to stop in Salem, you'll probably end up doing I-5 to Portland, then it's really more about exploring Oregon and Washington as much as you can before you land in Spokane.

answered by
Dee from California

Amy, it totally depends on what you want to experience along the way.  Are you into wine?  You'll be going through some awesome wine country.  Are you into tourist sites?  Again, Portland and Seattle will hold your interest.

We do that drive a lot, being Californians who lived in WA for 10 years.  For us, I5 everywhere except from Red Bluff to Salem is the most boring ride there is.  (But that's us.)  I5 is SO much easier to drive on the weekends.  Be aware that the traffic through Portland and Olympia to Seattle is some of the worst in the nation, rivaling LA.  (If you don't have the WAZE app for your phone yet, be sure to download it to give you routes and traffic info.)  Try not to go through either after 3p.

But I5 (and thus Salem) is about 5 hours longer than going up I97 through Eastern Oregon. For us, that's an easy, nice drive.  But there aren't a lot of "sites" to take advantage of.  Bend is nice and the Living Desert is much more absorbing than you would think.  You can go along the Columbia River, back tracking a bit to Moltnomah Falls and then Bonneville Dam or you can go straight over the river to the WA wine country.  Either way, you're going to spend 1/2 of your 8 days driving.  If you consider it a Road Trip, you should be fine.  If you want time visiting, it's going to be a crunch.

What does your sister suggest?