Best festivals and holiday time in Spain to enjoy the culture?

I'd like to come to Spain to enjoy the best fun festivals and enjoy the culture . Please suggest which season to arrive in Spain.

Fallas is my favourite fiesta because there is nothing like it anywhere else in the world. It's very noisy, very colourful and great fun. The mascleta (noisy firecrackers) in Valencia town hall square at 2pm is so loud, you can see the windows shaking. Valencia gets very crowded for fallas so you may want to go to Denia, which celebrates the fiesta on a smaller scale.

Alicante holds a similar fiesta with papier-mache statues being burnt in the streets for the longest day in June.

Denia also has a bull-running fiesta called bous a la mar in July when bulls run through the streets into a makeshift bullring where young - and not so young - revellers try to force them into the sea. Often the bulls 'persuade' the participants to jump in!

Whatever time of year you visit Spain, you will find a fiesta somewhere.

Absolutely go to Valencia for Las Fallas! It's amazing. Though it officially kicks off with locals with La Despertá and continues with weekly then daily ground fireworks called mascletás, the time you absolutely need to be there is for March 14-19. These aren't puppets. They are giant paper maché, wood, and styrofoam sculptures that are as high as 4-5 stories tall and are set up all over the city in squares and in intersections. Traffic grinds to a stop and you can walk the entire city finding beautiful artistic creations all over. There are parades like the Cabalgada de Fuego and the Moros and Cristianos parade at Almirante. There are phenomenal fireworks for three nights in a row along the Túria. In addition to already amazing food, you can fatten up churros dipped in thick drinking chocolate and see buñuelos (donuts) made by hand. There is a beautiful religious aspect of this in La Ofrenda and you'll see beautiful traditional costumes, and hear local traditional music as small neighborhood bands walk along the streets playing. 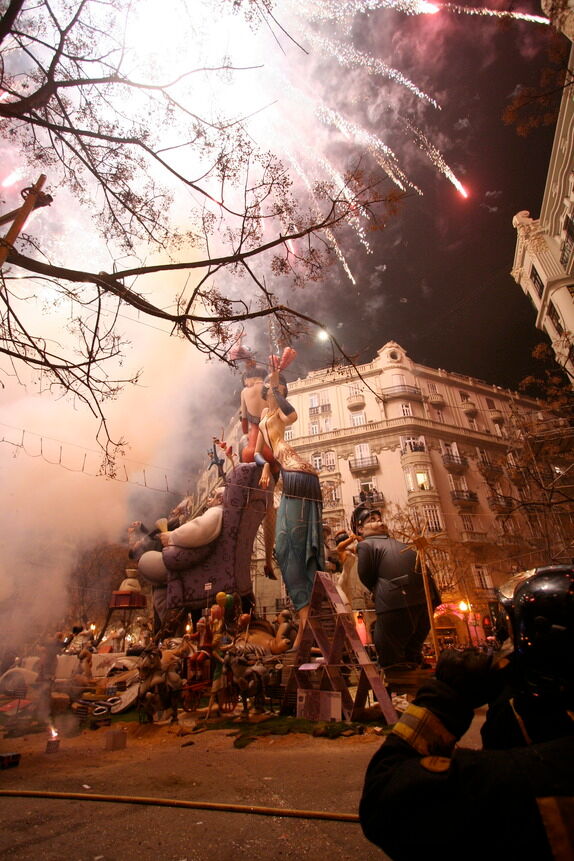 The entire city is a party, but it's not a drunken brawl. Walk and get lost and you may find yourself along a street full of locals all sitting around paella pans making paella in a neighborhood street cooking party.

The entire event culminates in La Cremá on the night of the 19th when all but one small statue will be burned entirely to the ground.

It's intense, very personal for the locals, and absolutely beautiful with something to appeal to all the senses.

(The 2015 calendar is in Spanish here: http://www.fallasvalencia.es/programa-fallas)

You'll get a decent overview in my blog post about Fallas Vocabulary that describes all the biggest events as well. It's amazing - absolutely worth every moment.

Another really special celebration in Spain is also in the region of Valencia - it's the Moros y Cristianos celebrations that go on all through the Valencian Community every October. This is a celebration of the liberation of the region by King Jaime 1. My favorite place for this is in Callosa d'en Sarriá where they celebrate intensely over a three day period with parades, celebrations, dramatic reenactments in the town square, and two days of an intense battle between the Moors and Christians where they all carry guns shot with gun powder. The air is thick, it's difficult to breath, burst of bright orange flame come with each shot, but it's amazing. 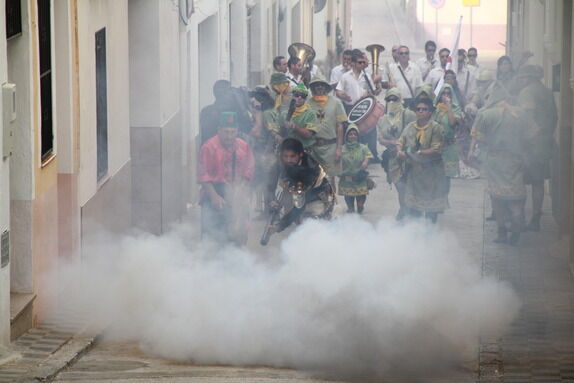 answered first by
Travis from Kamloops

It depends really on what you're into, but a couple festivals came to mind immediately for me (other than the obvious ones like the Running of the Bulls, la Tomatina, and Carnival):

1) Semana Santa in Seville - occurring the week leading up to Easter, Semana Santa involves locals parading floats, pasos (lifelike wooden sculptures of Jesus' life and death), etc. The most famous one happens in Seville, but nearly every city has their version.

2) Feria de Sevilla in Seville - this is basically the opposite of Semana Santa and occurs over the two weeks following Easter weekend. A celebration of everything Andalucian - bullfights, dancing, music - basically a full on two week celebration of fun.

3) Las Fallas in Valencia - occurring the week leading up to March 19th (St. Joseph's Day), this festival is pretty unique. Locals spend the year crafting giant puppets which are paraded through the streets and set on fire, resulting in epic bonfires (truly something that needs to be seen to be believed).

There are also some great music festivals like FIB in Benicasim.