What are a few top cities to experience in Spain?

answered by
Terry from Honaunau, Hawaii

The list of amazing cities in Spain is endless!  It is such an diverse country.  I believe to answer this question correctly for you, knowing what interests you will get you the best answer along with how much time you have for this trip.  But here are my personal favorites.  Most visited are Madrid in the middle of the country, Barcelona on the Mediterranean Coast and Seville in Southern Spain.  While in these ares, it it well worth visiting nearby cities.  From Madrid a visit to Toledo, Ávila, Segovia and Salamanca are worth including in your itinerary.  Near to Barcelona are Cardona and Figueres.  And in Southern Spain, along with Sevilla are Carmona, Córdoba, Granada and Cadiz.  In Northern Spain (Green Spain) must visit city includes Santiago de Compostela, León, Santillana del Mar, Bilbao and Pamplona.  And one of my favorite parts of Spain is an area that very few visitor's include in their itinerary which is known as Extremadura, located Southwest of Madrid, some of the amazing cities includes Cáceres, Trujillo (Spain) and Merida (Spain).  On several of my trips I have planned my itinerary based on the location of Paradores - Venta Vieja, hotels owned by the government, many of which are historical buildings that have been converted into modern hotels (on the inside).  Some of these Paradores were hospitals, convents, palaces, fortresses, castles, etc.  They are not in every city in Spain.

Valerie
Great answer, Terry! I've always wanted to visit Spain! I wanted to let you know that we've helped you geo-tag the places that you mentioned in your answer so that they appear on a map next to it. You can also do this yourself in future answers by simply typing the @-symbol and then the name of the place as you're typing your answer. Check it out!

Terry
Gracias Valerie! Will will do that next time. I appreciate you sharing that.

The beauty of Spain is that it will surprise you with its diversity. It is lush and green in the north with true mountains and deep valleys, the rich Basque culture and mouth watering pinxos. There, you should stop in San Sebastian for a day or two and may be stop in Pamplona if you're working your way south by car and have the time.

Although Barcelona is a phenomenal city and the art/architectural work by Gaudi so prominently displayed there is absolutely something you should see, it isn't a city I'd stay in long. (Gasp, I know). EVERYONE loves Barcelona. That is precisely the problem. It's huge, it's unwieldy, it's international, and it's crazy crowded ALL THE TIME. Yes, go... but don't stay too long. There truly are prettier parts of Spain.

Valencia is one of my favorite Spanish cities with phenomenal food (ask and I'll give you a list of restaurants), history (there's a Carthaginian ruin at Sagunto), architecture both old and new, and a rich culture (check out Fallas in March or La Tomatina in August). There is too much I could say, but I lived there for two years and it became home. I truly love the city, the region, and the people. Go there and then travel outside of it too. (Great day trips outside of Valencia include Peniscola, Bejís, Teruel, Guadalest, and Xàtiva.)

I love the coasts, but the interior is nice. If you go to Toledo, you can also stop in Consuegra and Campo de Criptana to see some of Quijote's windmills.

My favorite region outside of Valencia is Andalucía where you can see Granada, Cordoba (Spain), and Seville all in a short period of time since they are so geographically close together. The mountains and coastline are all close enough that when staying in Granada, you can literally ski all day, then dine at the beach in the evening. All three cities are steeped in culture and history from the time with Moorish palaces, Jewish neighborhoods, and Cathedrals all within blocks of each other. It's amazing and beautiful. The food is divine, the culture rich, the music intoxicating. It's another place to relax, stay a while, and soak it all up at a Spanish pace... slow.

Yeah, Madrid is the capital. It's big and beautiful and you'll probably fly into it, but the rest of the country is just so rich in experience and culture. So... San Sebastian to the north, Valencia on the Mediterranean Sea, Toledo if you go inland, and the cities of Andalucia to the south where you can even take a quick hop to Gibraltar or even Tangier if you have some time.

Brenda
Tiffany, could not have said it better myself. For Barcelona, add a day trip to the Dali museum in Figueres followed by a trip to Cadeques and Port Litges to see Dali's home (or rent a car and spend the night in Cadeques....it is fabulous. Quaint beach town. Also a day trip to Sitges. Beautiful and so close to Barcelona. In Andalucia, I would visit the white villages, and make sure to see the mezquite de Cordoba, visit Jerez for some sherry, and walk plaza espana in Seville. In Madrid, in addition to Toledo, take day trips to Avila, Cuenca, and Segovia for suckling pig.

answered by
Cristina from Salamanca, Spain

this depends on your likes and preferences. For me without a discussion you should visit:

Madrid: our capital city and a wonderful mix of history, art, parks and a great life.

Barcelona our second city and a great spot if you want to be close to the see and enjoy de Modernism art as well as a high "life-level". 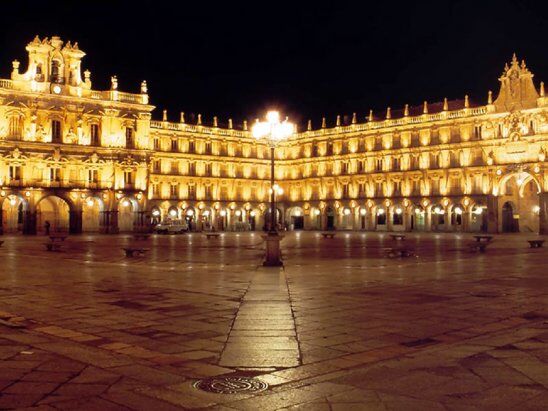 Salamanca not far away from Madrid and one of the World Heritage cities in Spain. Beautiful, full of students all year round, art from the Roman Empire to our days and good choice for a weekend (al least two days)

Granada One of the jewels of Spain (and the world) is in Granada, the Alhambra admires everybody, but not only. You´ll find beautiful districts as Albaicín, marvelous churches and, as in all Spain, great gastronomy.

Santiago de Compostela in the northern Galicia community, you´ll find an little city, full of history, plenty of art and surrounded by beautiful woods and not far from de sea.

In this post I wrote I explain which are my favorites Spanish cities: