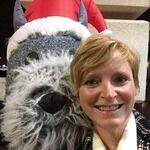 Car rental in Siena and over to Lucca

We are renting a car while in Siena to see some of the towns around the area, then we will be driving over to Lucca and dropping off the car the next day. (I am aware of the special license we will need from AAA to drive in Italy).

What are some of the 'must see' towns in the surrounding area of Siena and along the way to Lucca.

As a note, we are doing a tour to some wineries in Chianti and a visit to San Gimignano the day before getting the car.

It is a very unusual Italian town or village which is not worth a visit, if only for its church and the local bar cafes! Almost all Italian settlements have ancient roots and include at least a few interesting buildings in their historical centres.

Siena > Lucca is not really a long drive. It's only around 75 miles and won't take you much more than a couple of hours. So, assuming you want an all-day wander, I'd suggest that you either go west & then north to take in the hill-town of Volterra (less busy & visitor-focused than San Gimignano), plus any of the other villages you'll pass on the way to Pontedera (an industrial town with a small historical centre) and thus to lovely Lucca.

1. Go north and take in Certaldo, with its lower (Bassa) and older upper town (Alta), and San Miniato with its early Medieval historical centre....plus any other villages which appeal.

2. Go slightly north-east, skirting Florence but including Pistoia, a Medieval city with lots of sights & sites and perhaps the spa town of Montecatini Terme.

If you are also asking about daytrips whilst you are based in Siena I would suggest Arezzo and Perugia...and don't ignore Pisa, which has much, much more to offer from an historical point of view than just the Leaning tower.

As is always the case in Italy.....you simply have too much choice! :-)

Do be aware that the majority of Italian cities, towns and even villages have ZTLs (Zona a Traffico Limitato)...restricted traffic zones. All ZTLs are signed (though, obviously, usually in Italian-only) and the majority include all or part of the historical centre. There are fines for non-authorised ZTL entry. Many ZTLs now have CCTV cameras and fines are automatically taken from the card you used to rent the car, often with extra admin fees. So keep your eyes open for those ZTL signs! As a general rule it's best to park outside the historical centre and then walk (or take public transport) in. :-)

Jennifer
Thank you! There is a lot to choose from! Thinking of hitting Pisa on our way over to Lucca where we are staying for two nights after leaving Siena. Have seen a lot about the ZTLs. Definitely going to do our research on that!

Lucca gets a lot of press as a tourist destination but I found it a bit disappointing. Lots of narrow walkways (medieval streets built before there were cars). Lots of churches. A few large plazas. That's about it. There are some good restaurants. Lucca was on the tail end of our trip from Florence and Siena.  By the time we got there we'd already seen way too many churches.

The thing we enjoyed most in that part of Italy were the five seacoast villages of the Cinque Terre.

The Cinque Terre would be my favorite diversion. You could do it if you get an early start from Sienna. The village of Riomaggiore (second photo below) is about a 1 hour and 15 minutes drive from Lucca. If you get there early enough you can hike between the five towns. That's an experience you'd remember for the rest of your life. There are magnificent views, vineyards on steep hillsides, and more. The hike isn't too difficult if you're in reasonable condition. If you don't have time for the full hike, you can just hike from Riomaggiore to Vernazza which would give you a great feel for the Cinque Terre. Vernazza is the first photo below. The lookout tower was erected in the 18th century to guard against Barbary Pirates who would kidnap attractive young women and sell them into slavery in North Africa. This is the view of Vernazza that you see when hiking the trail from Riomaggiore.

There is an inexpensive hourly train between the villages so you could hike part way and ride the rest. Getting a boat ride between towns is also a possibility and gives a different view. 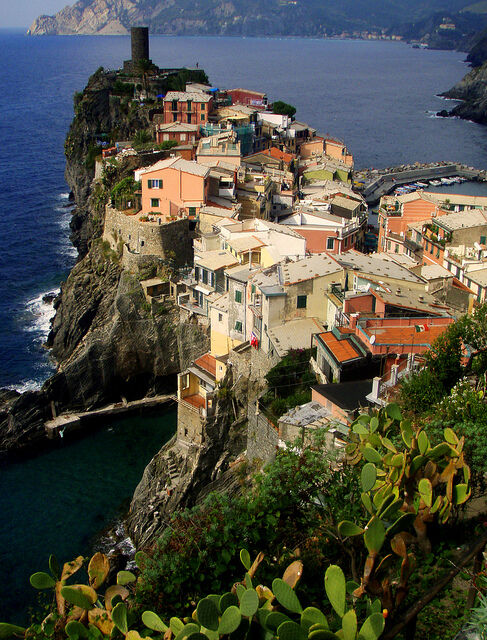 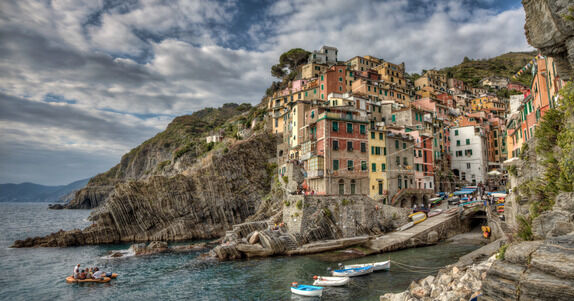 Jennifer
The majority of us have extensive history driving sticks, so no worries there. We are staying in Sienna 3 nights and one of the days we wanted to explore the hill towns around Siena. We then want to take the rental car over to Lucca, where we are staying two nights. Thinking of checking Pisa off the list on our way there. We actually have been to Cinque Terre before. So beautiful!