Staying 2 nights each in Seattle and Vancouver pre and post an Alaska Cruise in September. We are late 60's. What should we not miss? Best places to stay that is not very expensive? We can rent a car if recommended.

Thanks for any guidance.

There are lots of traditional 'must do' things in Seattle, not limited to:

All of these things are within easy walking distance of the piers, though it will depend on which cruise line you're taking (Norwegian and Oceania Cruises leaves from near Pier 69, whereas Holland America and Princess Cruises leave from the Pier 91 - Smith Cove Terminal--the latter will definitely necessitate a car).

Other cool things (especially if you're getting a car):

As for places to stay, it's not super fancy, but I stayed at Mediterranean Inn when I first moved to Seattle and it was sufficient for a few nights and reasonably priced... also a close walk to the Space Needle, Seattle Center, and Dick's Drive-In, which if you don't have any dietary restrictions, is a Seattle MUST DO.

Kim
nice! I am visiting Seattle as well this summer.

Valerie
Have a great trip, Kim!

answered by
Todd from Seattle

I would for sure rent a car. While you can see and get around fairly easy in the city, there are things you might want to do that require a little more travel.

I would try and see or go to the Pike Place Market, visit the Seattle Center (Space Needle and Chihuly Garden and Glass), maybe a ferry ride out to Bainbridge Island Ferry, get some fish and chips at the Ballard Locks, find some culture at the Seattle Art Museum (or take a gallery walk), learn about our city and region at the Museum of History & Industry (MOHAI), have the best damn coffee ever at Espresso Vivace, walk along the Seattle Waterfront, take a walk at Gasworks Park Marina, and maybe catch a Mariners Field game if you like baseball.

There are more great restaurants than you can shake a stick at ... I recommend you do a little research based on what you like to eat. Great view ... Ivars Fish Bar or Lake Union (not the walk up counter in the front, but the restaurant in back!), Salty's on Alki. Spinasse, Revel, Staple and Fancy Mercantile, Assaggio ... seriously, so many to choose from with different cuisine, atmospheres, it would do you well to do a little digging!

There's lots more to do, but hopefully this wets your appitite! Have fun!

answered by
Katherine from Tucson

Some thoughts on your Vancouver visit:

- Stay on The Peninsula in Downtown Vancouver. Most things are walkable from there. Plus, Vancouver has a great public transit system. Parking is a nuisance best avoided.

- The Westin Bayshore is expensive, but is a nice place and is in an ideal location – on the Stanley Park English Bay Seawall, near Stanley Park, near the two major shopping/eating streets of Robson & Denman. Lots of attractions within a short walk.

-        Times Square Suites is a less expensive hotel in the same general area as the Westin Bayshore. Supposed to be very nice.

-        On the low-end, the YWCA Hotel/Residence is reputed to be very nice and  inexpensive. The location is not quite as central, though. But most things are still easily walkable.

Here are my top suggestions for what to see & do in Vancouver. Not sure what you are specifically interested in, but these will suit most people:

-        Museum of Anthropology – a great museum about the native people of the northwest, with lots of artifacts.

-        Walk/bike ride the seawall that surrounds the downtown area and Stanley Park (the second largest urban park in north America, after central park)

-        Visit Chinatown – one of the largest in north America. Very authentic.

-        Whale watching trips leave from downtown – mostly Orca whales, but a variety of others as well

Debbie
Amazing recommendations, Katherine! I'm a community manager here, and I just wanted you to know that we've helped you geo-tag the rest of the places in your answer so that they can all be visualized on your map. Thanks for sharing! :)

In Vancouver, try and get a room at the The Sylvia Hotel Vancouver on English Bay. Fabulous old hotel right on the beach, within walking distance of everything downtown and it won't empty your wallet. From the hotel walk along the Stanley Park English Bay Seawall to the Granville Island Ferry Dock and head across to the Granville Island Public Market to spend an enjoyable morning (or afternoon) eating your way around it . Walk in the other direction into Stanley Park and head to The Fish House in Stanley Park (right in the park) for a great brunch or dinner - ask for Louis.

If your history buffs take a walk through one if our oldest neighborhoods, Strathcona, and end with dinner in Chinatown at Bao Bei.

answered by
Jordan from Vancouver

If you are going to be staying in Vancouver and are comfortable taking public transit/taxis then their is no need for a car.

Take the bus to Horseshoe Bay and then the ferry to Bowen Island. 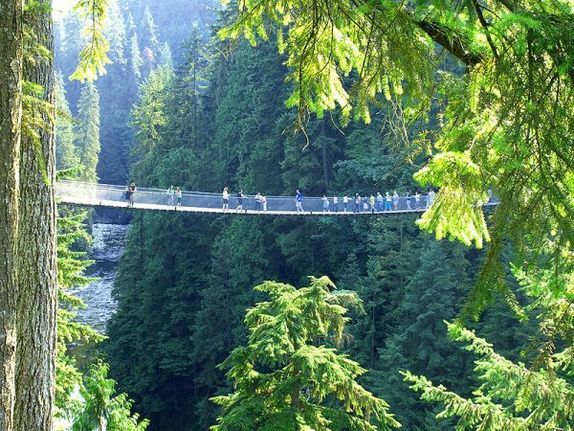 Don't miss "Granville Island" in Downtown Vancouver for artsy shopping, great food spots - many of the downtown older hotels have been upgraded with charm and affordability

Evan
Granville Island Brewery is a nice place for a cold beer while there. And you can even rent a boat and take a tour of False Creek in summer!

answered by
lauren from Vancouver

Welcome!! I hope you have a wonderful time here in Vancouver :)

Seawall you could cycle or walk the Vancouver Aquarium is cool too :)

These are a few ideas, enjoy your cruise!

answered by
Megan from Toronto, Ontario

In Vancouver, if you love going on walks, check out the seawall at Stanley Park. It's a lovely walk around the park and you'll finish at English Bay where you can grab food on Denman St. I also love the Vancouver Aquarium. The prices for hotels can be experience but you can try Priceline and Hotwire. If you don't mind staying outside of Downtown, check out Douglas Guest House and Windsor Guest House http://www.dougwin.com. I haven't stayed there but a friend did and it was good value. Vancouver is transit friendly!

Hey Les! We did the exact same thing a couple years ago. We stayed a week on Bowen Island and a couple days in Vancouver before we left on an Alaska cruise. Bowen Island was really nice and beautiful. A week there might have been a bit much because it was a little sleepy.

We loved Vancouver and in hindsight wished we had a couple more nights there. We stayed at the Pan Pacific Hotel Vancouver which was nice because it was literally connected to port which allowed the bellman to take your bags right on to the ship. That was great. It was also a walk to all the bars restaurants in Gastown which was fun. A couple places we liked to eat was Meat & Bread (unique sandwiches) and Pourhouse (a gastro pub with handcrafted old school cocktails. Best Ramos Fizz i've ever had and they gave me history lesson the drink too)