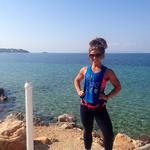 Best cities in Italy for a solo female traveler?

I'm planning on heading to Italy in the next couple of months (mid/late May or July) and will be on my own. I travel solo often, but always want to be as cautious as possible. I also want to make sure I don't miss out on adventures & sight seeing because of being too cautious.

I will be flying into Rome and staying anywhere from 10-15 days, depending on the recommendations. Moderate budget- any and all recommendations for cities and/or hotels much appreciated! When I travel I typically like to mix some time by the beach, seeing museums or archaeological (or UNESCO World Heritage Sites) sites, exploring the cities and learning more about local life, all while staying as active as possible.

Any help is much appreciated! Thank you and safe travels to everyone!

I would fly to Rome in May (too hot and crowded mid summer). After landing, spend 3 or 4 days in Rome. See the Colosseum and Roman Forum and Palatine Hill, have a meal in Trastevere, don't miss the Borghese Gallery and Museum and gardens and spend a day at the vatican. Have a negroni while sitting at an outside cafe near Piazza Navona. Usually on the first trip you want to knock out all the touristy stuff. Rome felt very safe. Just be smart at night and stay on busy streets and squares.

I would next train to Naples and on to charming Sorrento. Take the Circumvesuviana train from Naples to Sorrento. It is crowded and pick pocket central but you will have packed light and have a cross body bag because you are a smart solo traveler... so no worries. Base in Sorrento for 3 or 4 days. Visit Pompeii, the Amalfi Coast including Ravello, and visit Ischia (where the locals go for thermal baths and island fun.). If you are brave spend a day in Naples and eat the famous pizza and visit the museum that houses the treasures of pompeii. It's safe during the day. I walked all around as a single gal and felt fine.

Finally, travel by train to Florence for your last five days. DO NOT LET YOUR LUGGAGE OUT OF YOUR SIGHT! I considered myself a savy traveler but had my luggage above my head and it was stolen. Florence and Sorrento are very safe at night for a single female. See the pitti palace, the David, visit the a

The Baptistery of St. John and the Duomo. Take the bus on a day trip to Siena or do a wine tour. You can fly from Florence Airport to a hub airport for your flight home. Wow...can I come too?

Polly
This answer is spot on, both as far as your concerns, and as a great itinerary for the time allotted!

Jen
Thank you very much for such a thoughtful and detailed response! I will most certainly take all of this info into account when planning my itinerary! And yes, haha, since we are neighbors here in So Cal, you are more than welcome to join me for a girl's Italian adventure getaway!

answered by
Devra from Philadelphia, Pennsylvania

Jen, I hope you have a fantastic time.

I generally found traveling around Italy as a single woman to be safe. There is for sure a fair amount of cat calling in parts, but I think dressing modestly can help with that a bit, and so can wearing a ring on your ring finger.

Generally, the North of Italy is a bit more developed and from my experience, a bit safer. The small towns in the north are often overlooked but truly worth visiting. Check out Padovaand see where Galileo taught (you can actually stand behind his lectern), Metropolitan City of Bologna for incredible food, Mantova for just a short day visit, and atleast a day or two in Venice. This summer is also the World's Fair in Milan and it sounds like it's going to be really interesting.

Finally, I cannot recommend a visit to Sicily highly enough. It is stunningly beautiful. Keep in mind, it's a bit more difficult to get around here and a bit less safe, but I think as long as you are smart about where you are when, you should be ok. Safe travels.

answered by
Richard from Cape Town

I travelled to Italy with my girlfriend and I learned a lot about her safety and comfort on that trip.

In northern Europe, you won't draw any more attention that you usually do in South Africa or the US or the UK. Italy on the other hand you'll get more attention than you're used to or might want. It is usually in the form being stared at but if you are alone, Italian men can become real nuisance.

They are not so bad that you need fear for your safety, they are simply an unending, tiring nuisance. My girlfriend was approached, ogled and even lightly groped every time she tried to move about the Rome alone. They even flirted and stared at her when I was standing next to her. Though they would stop if I looked at them.

In other parts of the world a smile is just a friendly acknowledgement but in Italy, when a woman smiles and looks a man in the eyes, it's often considered an invitation. Wearing dark sunglasses in the Souther Parts of Italy is almost a must.

Dress modestly to minimize attention from men especially in Rome. Milan and Province of Florence is a lot better and you will have similar attitudes to what you would get in France.

Take your cue from what the local women wear. It is my experience though that for young women, even wearing a shapeless sack and sensible shoes may not help to keep them from trying to flirt and make advances.

If a man is a real pest and won't leave you alone, say "no" firmly and loudly in the local language. In italian, "No" will work just fine. That's usually all it takes.

You don't have to miss out on any sites simply because you are cautious. Italy is a very safe country. Crime there is largely petty theft, so if you watch your stuff you'll be fine. When it comes to the men, it is almost like a cultural activity to flirt with women. Simply establish your boundaries early and be very firm if anyone tries to  bother you.

If you feel like you're being followed or hassled, trust your instincts. Don't worry about overreacting or seeming foolish. Start screaming and acting crazy if the situation warrants it.

Wear a real or fake wedding ring, and carry a picture of a real or fake husband. There's no need to tell men that you're traveling alone, or whether you're actually married or single. Lie without fear. Say to them that  you're traveling with your husband and that he is around the corner getting you an ice cream and that he is a retired 7ft tall Marine who had to retire to take care of his anger management issues.

Jen
Thank you very much for such a thorough and insightful response, I really appreciate it! I just returned from South Africa about 10 days ago (solo trip but was also there for some work events in Joburg and Cape Town) and everything ended up being just fine (I also wore a fake wedding band during this trip and often do that on my solo international travels). I have heard about how forward Italian men in Italy can be towards females, so thank you for those tips as well. And hilarious comment about lying and mentioning the retired 7ft Marine husband, haha. Again, THANK YOU very much for taking the time to write such an extensive response, it is much appreciated.

Richard
It is a pleasure Jen. Safe travels!

answered by
Debbie from Boulder, Colorado

We just got back from Sardinia… amazing beaches and great people. I highly recommend it and would def. rent a car with a gps. You need time to explore and it is worth it! Cala Gonone, Alghero, and the Coast Smeralda are the towns we went to and loved them all. Have a great time.

answered by
Emilia from Positano

concerning Cinque Terre (all 5 of them) are very safe to travel solo. They are well connected by train almost every half hour and there is a Cinque Terre Card that you can buy to avoid to purchase the train ticket everytime. Path fees are included. Did you already plan where to stay? If you need more infos just let me know!

answered first by
Jacqueline from Philadelphia

I highly suggest making your way over to Florence! I met some of the most welcoming people there and it's a great city to emerge yourself in the local culture.

Jen
Fantastic! Thank you very much, I will most certainly make sure that I add that to the list!

answered by
Celeste from Ozieri

Hi! Sardinia is a wild island you can reach from Civitavecchia (the nearest habour if you are in Rome) with an overnight travel. We have the best sea ever, but you're not going to find an efficient public transport so it is better if you get a car or something. By the way, it is a safe place for solo female traveler...in our culture (which you'll discover to be slightly different from the italian one) women are highly respected and chivalry is not dead at all :)