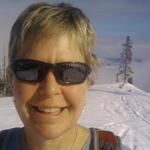 any outstanding places to park our van overnight?

I know of some interesting side jaunts, if you want some. The  is north of I-90. Not sure it is a good "park your van", but they do rent the hobbit houses by the night (http://theshireofmontana.com/). It is a bit north of I-90 though, so have to have a real Tolkien love to hit that.

There are some old towns, including Ghost towns in Southwestern Montana. Bannack is a real ghost town, but Virginia City is still open and quaint. It has a hotel in operation since the 1800s, but it has been added on with an art deco wing, which is not 1800s style. Nevada City (California) has buildings that were moved to the location and a hotel that looks more like a rustic 1800s hotel in a mining town. Garnet is also a ghost town (well preserved) but north of I-90 instead of south. Arlee, which is not too far off I-90 has a Buddha garden. In Bozeman, you can see the Madison Buffalo Jump (native Americans used to drive herds off the cliff there). Near Billings, you can take a history jaunt to Little Big Horn and there is Pompey's Pillar, which has an etching in the rock from Lewis and Clark (easy to get too, not far off road).

If you are continuing on I-90, not I-94, there is the Negris Occidental Hotel in Buffalo, Wyoming, where you can still see early 1900s bullet holes in the ceiling. Devil's tower and another buffalo jump are out in the east of Wyoming. In South Dakota, you can take a side jaunt into Deadwood, although it is more of a modern casino town these days. Rapid City has a dinosaur park, a 600' tall underground waterfall, the Chapel in the Hills (definitely recommend a visit here) and Mount Rushmore is not far off the track. The Badlands are east on I-90 and everyone should visit the tacky Wall Drug at least once in their lives. Farther east is the Corn Palace In Sioux Falls, you have the Buffalo Ridge 1880 Cowboy Town (a bit touristy, but interesting), the Porter Park Sculpture Town, the Sioux Falls Michelangelos and the Devil's Gulch is a bit east.

I don't know much about Minnesota or Wisconsin. In Illinois, there are the Rockmen Guardians in Rockford and there are tons of things in and around Chicago. In Indiana, there is City West, which is a ghost town swallowed up by Dunes and then there is Mt Baldy(a big Sand Dune). Can't help in Michigan either, except Granite City(beer town), which is out of the way.