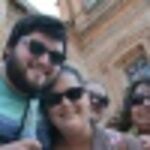 I'm planning a joint bachelor party for two grooms (Gay Wedding! Woo!) and we are looking for ideas in the Portland area!  We will be staying on Alberta Street but open to exploring other areas of the city!

This might be a totally cliche Portland recommendation, but Voodoo Doughnuts, because people do regularly have their nuptials there.  I follow their Facebook fan page and they post photos of what they refer to as "legal" and "non-legal" weddings and they always look awesome.  Since they have those, I'm assuming they could whip up something for a mini wedding party.  If anything, you guys could just grab groom and groom donuts (they make bride and groom donuts, so I'm sure they'd be honored to make you guys groom and groom donuts, too!).

Now this other spot, I normally wouldn't recommend this kind of place and I know that this is a gay bachelor party, but just for the cheese factor of it -- Acropolis Club.  It's a "gentleman's club" that also doubles as a steakhouse.  They have 65 beers on tap and pretty darn awesome steak bites.  I think this place is actually more famous for their beer and steak bites and that their gentleman's club portion of the place is just an afterthought.  Both the cover and the food are super cheap.

For a nice dinner, I like Le Pigeon.  Such tasty dishes.  Constantly rotating entrees and they seem to have their famous foie gras profiteroles all the time, which are as amazing as they sound (they're covered in fleur de sel caramel sauce!).  For a pre-drink in the area, Rum Club has really awesome cocktails.

And I always recommend this place to anyone, no matter what they're in Portland for -- BUNK Sandwiches.  Cuban sandwich, roast beer sandwich, tomato soup, beermosa.... Mmmmmmm.

Have fun, boys, and don't get into too much trouble ;)

Annemarie
I second Voodoo. It IS cliche, but you have to do it anyway. And go at 2am when the line is shorter.

Okay, this place is a guilty pleasure of mine, and takes a certain type of personality to like it, but there's a bar called  The Lovecraft just over the bridge from downtown. It's a throwback to the late 90's new wave bars that were popping up all over New York's lower east side. They play Depeche Mode and The Smiths, and there are heavy velvet curtains and cheap drinks, but I went there for a bachelorette party and it's the kind of atmosphere that makes fun of itself and a good spot to end the night, after you're done doing shots and being rambunctious.

It's also right near  Dig A Pony, which is a very "see and be seen" hipster bar with a lot of attractive people.

answered first by
Melanie from Oregon

What type of activities do your friends enjoy? Portland has so much to offer...if you can narrow it down a little, I will be able to provide better suggestions.