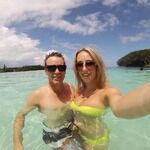 My boyfriend and I (22 y/o) will be travelling to New York City in May 2017. This will be our first time to New York which I understand can be daunting, so we want to know the best way to experience it! What tours? Best places to see? Places we should eat at? Places to avoid?

We will be there for 7 days

Get a multi day pass on the hop on hop off bus, do all routes including night tour and Brooklyn. You will see everything , get lots of info and get off at whatever interests you. Many of these companies combine the ticket with a boat ride around the city , that's great too. There's a million restaurants from McDonals to Le Cirque. Go to the TKTS Times Square booth on 47 th and Broadway for 1/2 price tickets to many great Broadway shows.

Walk through neighborhoods like the Greenwich Village, SoHo, Upper East Side, Upper West Sides. Don't miss the great museums American Museum of Natural History, The Metropolitan Museum of Art, Museum of Modern Art. Remember for the first two the entry fee is a suggestion not a mandate. Pay what you want or can afford. Each of these museums can take a day or more to explore in depth , read the info to see the exhibits that interest you. There are also many fun specialty tours, food tours, the sex and the city tour etc, if you are into those. Have fun!

We felt this way, you know, about Sydney! Like that (awesome) city, a week is not enough to do everything and packing it all in can be more exhausting then fun.

The Frommers 2017 NYC guide comes out later this month, see if you can get a copy. They will give you good itineraries.  Also, TimeOut New York Guide. Good free magazine & site.

NYC is a big walking & public transit city. Plan to visit one significant thing a day like a museum or a show, and in between do some window or real shopping and good eating. Will get back to you on where to go and what spots to avoid (for food, avoid: Little Italy and Times Square).

In a weeks time you can get a real good feel for New York.  Best of all, you can do it on your own.

Take a stroll through any of the city's historic neighborhoods, such as Greenwich Village, SoHo, the Garment District, the Upper East Side, Canal Street, Chinatown New York and what's left of Little Italy.

New York has some very nice outdoor venues you may wish to take advantage of.  Amongst my favorites are Battery Park, the River Walk, the Staten Island Ferry, Ellis Island, and the Statue of Liberty.

Probably the best (and free!) things in New York is Central Park. Even if you just take a short stroll through it, it's worth the visit. The park itself has many an attraction, including the central park lagoon, the Central Park Zoo, and many pleasant walking trails. There are walking tours and bicycle tours available, and of course, you can do it on your own.

Another popular, and free attraction is a walk over the Brooklyn BridgeNot only is Brooklyn a good place to visit on a trip to New York City, it can be a destination in, and of itself. For about the last ten years Brooklyn has been on the rise. It's now a splendid mixture of traditional "ethnic" neighborhoods and newer, hipper enclaves. Take a look at Wikipedia's entry for Brooklyn and you'll find a rundown on the various ethnicities in various sections of town. It's in these places you'll find some great food.  The bridge can sometimes be mobbed with tourists, but it still provides some terrific views of the city, and the historic aspect of it can't be beat.

Eventually, everyone that comes to New York visits Times Square, but it really isn't so great.  It may have been spectacular at one time. However, now it's mostly just a huge tourist trap.  It might be worth a walk through, but not much else.

As far as museums go, I heartily recommend the Tenement Museum, 97 Orchard Street, in the lower east side. This 1860's building is set up to reflect the various immigrant groups the settled in that area throughout the years. Each apartment is setup to reflect immigrants of different origins, and costumed actors recreate the day to day lives of these people. The ground floor is set up as a business from the past. There are walking tours of the neighborhood, as well as various events throughout the year. Highly recommended!

Also, the American Museum of Natural History has long been one of the premier museums in America. It should be toward the top of your list if the weather is inclement.  It is time consuming.

Many people enjoy visiting Grand Central Terminal. The building is historic, full of many market type shops, and is an excellent jumping off point for exploring beyond the city.

As far as dining is concerned, I don't know what you'd like.  However, since the entire world is represented there, and it hosts over 30,000 dining establishments, if you go hungry it's because you're trying to.  Now, if you are looking for an authentic New York dining experience consider eating at Katz's Deli. It is Located on the corner of Houston and Ludlow. Open since 1888, it's one of the last real delicatessens in New York City. If you've ever seen the film "When Harry Met Sally", it's where Meg Ryan's famous scene was filmed. It still serves the best Pastrami, anywhere!

Just down the street is Russ & Daughters.  It's a great place to pick-up some snacks for your late night cravings.  Everything there is very New York.

For after-hours relaxation I’d recommend McSorley's Old Ale House, at 15 E. 7th Street in the east village, or Pete's Tavern. Both claim to be the oldest pub in New York.

McSorley's was the last of the "men only" bars in New York. Women weren't allowed in until August of 1970, and that was a result of legal action taken against them. It is said that nothing has been removed from the walls since 1910.

I hope this helps get you started, and that you enjoy you trip.  Feel free to message me and let me know how things go.

So part two: food. There is a great new food court in midtown near Grand Central Terminal called Urbanspace Vanderbilt. It has stands of many great local eateries including Roberta's Pizza, which is amazing but far into Brooklyn. And many more. It is perfect for lunch--it gets crowded and it's not a discount place, but the selection and food are worth it. Go there before things like the New York Public Library or even Times Square (it's a few avenues West, not hard to walk to).

So much to choose from, but make sure you find time to ride the Staten Island Ferry after sunset. It's a free ride that gives you a beautiful view of the Statue of Liberty as well as Manhattan on your return. If you're planning to visit the Statue itself, buy your tickets NOW (https://www.statueoflibertytickets.com/tickets/)

See my answer on the above/previous entry/question. If you cant find it, let me know and I will reply shortly.

answered by
Barbara from Cambridge (Massachusetts)

Purchase a City Pass, it can be for 3 days or more. It will get you in to the most popular places, allowing you to get in faster and admission price will be discounted.  It lists all the attractions available so you can pick and choose based on your interests. Try to group your choices according to where they are located so you don't waste a lot of times traveling back and forward.  Also suggest you get a subway pass, it is the fastest and cheapest way to get around the city.

answered by
Matthew from Prescott

The best tour experience by far can be had from an organization called Global Greeters . The organization was started in New York and gives you personalized tours of places for free. Essentially you head to their website , signup for a tour and then you and the guide finalize the details. You can request any kind of tour or just get a tour based on an idea (ie. the best places to street art in Brooklyn).

Favorite museums are the Museum of Modern Art , American Museum of Natural History , The Metropolitan Museum of Art , and International Center of Photography Museum .

If you are looking to get up in a skyscraper for a birds-eye view, think Top of The Rock . You get vantage points of the city with the Empire State building, Chrysler building, Central Park and the Freedom Tower in it.

Want to see a show, gallery, live music or theater pick up the latest issue of "Time Out Magazine: New York".

Good Luck and Have Fun!

answered by
Eric from Rocklin

+1 on the Tenement Museum.

Some friends came into town and we booked a tour with Local Expeditions--the Citibike Dumbo tour--and we had a blast! As a local I thought this was such a great way to see the city as it was a small group led by an enthusiastic local. Not your usual hoaky tour. They had other tours as well that looked really appealing.