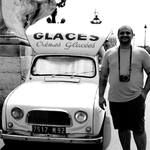 How do New Yorkers spend a weekend in the city?

Hi, I'll be in NYC for about 4 - 5 days in early June. I'm looking to explore what a typical day in a life of a New Yorker would be like on his/her day off.

Budget can vary from the ultra cheap to slightly luxurious. The goal is to explore different sides of the city and its inhabitants, hence variety would be key. And I realize there are so many people and sub cultures in New York that there is NO typical day that would fit any one generalized version of a New Yorker. That said, every city has a vibe and I'm looking to tap into that.

The suggestions you got are good ones... some weekends are for hanging about~ checking out the High Line Park, go to Central Park, MOMA, crossing the Brooklyn Bridge but that's what tourists do too and honestly, I cant remb the last time I made it to the MOMA or CP...  but on a pretty day, New Yorkers are spoiled with options. A leisurely weekend would be eating at Noodle Village in Chinatown New York (or grabbing Dim Sum), taking a citibike over the Manhattan Bridge or exploring new neighborhoods, doing yoga in Brooklyn and NY, strolling or running in Brooklyn Bridge Park (the Piers are excellent), checking out out door flea markets in Cobble Hill or Fort Greene... one of these days I will take the ferry to Long Island City (New York) or go to Queens for some yummy food...

answered by
Kathy from Beaufort

Take the subway to Brooklyn and go to Smorgasburg, a huge food fair, every weekend and then walk back across the Brooklyn Bridge toward New York, great views.

Go to Union Square Greenmarket on Sat. morning, go to Shake Shack or Eataly for lunch.

Walk the High Line Park on West Side (elevated train tracks that have been turned into a park along the water).

Look in New York Magazine for street fairs and weekly things to do.

Get half price tickets for plays at the Ticket Booth (TKTS) in Times Square or Southstreet Seaport. Must see a play before you leave.

Debbie
Great suggestions, Kathy! Thanks for sharing! By the way, I'm a community manager here and I've helped you highlight the places in your answer on a map! In the future, you can do this yourself as you answer a question by simply typing the @-symbol followed by the name of the place. Take a look at the cool map next to your answer! :)

answered by
Ari from Knoxville

There are parts of New York that make you feel like you're in another country, particularly Queens and South Brooklyn. If it's summer, biking out to Brighton Beach is lovely and invigorating. Cafe Glechik has great soups. MoMA PS1 is also really fun and worth the trip. You can also download podcasts to listen to as you walk under the 7 train aka "the International Express." Take it to the end, then walk towards Manhattan -- you will pass Latin American juice places where you can get fresh juices, little India, and wholesalers of all kinds. To me, it's the essence of New York. For a cool history of New York as a city of immigrants, I recommend the Lower East Side Tenement Museum. They are a bit pricey, but really help you know where you are. While you are down there, I'd walk to Nom Wah Tea Parlor for lunch.

answered by
heather from Montclair, Nj

head to Brooklyn for the day- perhaps hit the Brooklyn Flea Market in Williamsburg where you can find yummy food, hand made goods as well as vintage pieces. Then head out to explore the 'hood. My favorite store is Mociun. have fun!

I'd say grab a copy of that week's Time Out New York and see what's happening around the city. I've been living here for 5 years now and that's usually how I plan my weekends. Definitely try to catch a show at Upright Citizens Brigade Theatre because thats always a hilarious time.

The best thing you can possibly do in NYC on any day is walk around. Start on the Brooklyn side of the Brooklyn Bridge and walk across to lower Manhattan. Have breakfast in SoHo at Cafe Habana. walk up to Mud Coffee on 2nd Ave and 9th. Go to Central Park and lay in the grass while reading a book, or walk around the zoo. Pop into MOMA and catch the current featured exhibit. Have dinner at Gemma on the Bowery Hotel, and go for drinks at ACME.

Jillian
Great answer. Makes me really want to go and do exactly this. Thanks for sharing!

To be honest, a true New Yorker would probably leave the city for a June weekend--that said, though, here's what I usually do when I'm home (I live in LA now, but I grew up in NYC) and have a free day.

First, I'd start by getting a bagel at Ess-A-Bagel. There is no better bagel in New York. Period.

Then I'd probably walk over to The Garage Flea Market for some shopping and people-watching.

After that I'd probably hop on the bus and go up to the The Metropolitan Museum of Art. Yes, there are tons of tourists there but there are also tons of New Yorkers on the weekends.

Assuming I'd still have energy left, I'd bus it back down to SOHO (although I'd probably mosey through Central Park a bit) and catch an off-beat movie at an art house like the Angelika Film Center & Cafe.

I realize this isn't a wildly exciting agenda, but it's definitely what I would do with a free day and I think it's pretty typical!

Aran
Thanks Courtney, this is prefect. It's exactly what I'm looking for. Also, if they go out of the city in June, where would that be to?

answered by
Desiree from Kaohsiung

Check out Gothamist and Village Voice for events. Street festivals are common in early June and are scattered throughout Manhattan. TimeOut is also used quite a bit but is a weekly publication and won't allow you too much lead time if you're big on planning. Otherwise, Yelp can help you with popular shops, bars and restaurants.

I'd recommend getting the 7-day unlimited MetroCard for $30. You can use it for both the subway as well as the buses. 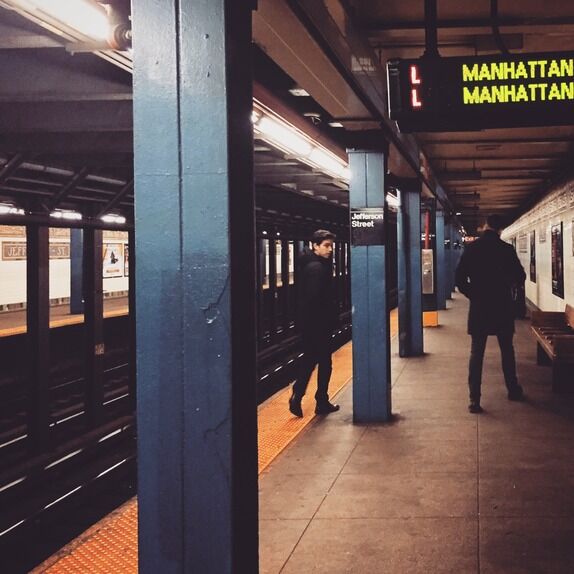 Also, us locals avoid Times Square at all cost but if it's your first time in the city you're obligated to go. Along The High Line is a bit more legit but go in the early morning with the commuters to avoid the tourist crowds. Same goes for the Brooklyn Bridge. Once you experience both in near solitude then you can go back during normal hours and know that you've experienced them both like a local.

If you decide to walk the Brooklyn Bridge do it on a Sunday because there is an amazing weekly food festival waiting for you on the other side.  Start on the Manhattan side of the bridge and walk the entire bridge over to a great Brooklyn neighborhood called DUMBO. In DUMBO is a weekly food festival called Smorgasburg that includes around 50 NYC food& drink vendors and the venue is as amazing as the food. It's held in an old open aired tobacco warehouse and is located in Brooklyn Bridge Park.  After you eat you should walk around the DUMBO neighborhood. 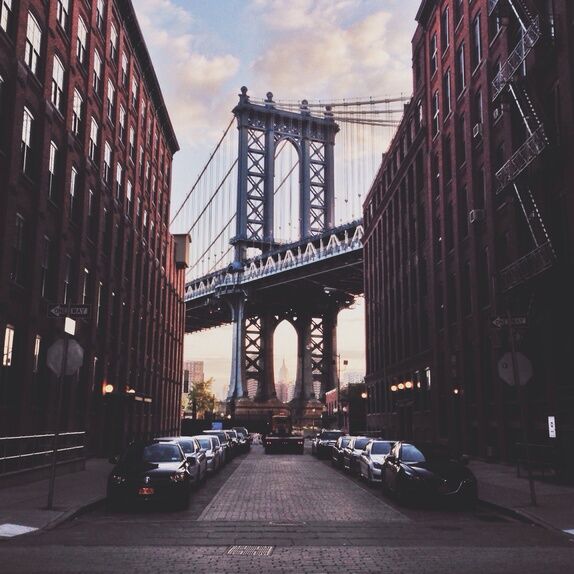 Do you want to stay off the beaten path, or are you willing to do some "touristy" things as well? There are a few must-sees: The Metropolitan Museum of Artis definitely one of them, and the American Museum of Natural History is pretty cool too. For insight to a local New Yorkers life, definitely check out neighborhoods like Chinatown New York/Little Italy for the outdoor fish and fruit markets, and East Village and West Village for the music and culture.

There's also this app called Stray Boots (Full Disclosure: I work here-not trying to plug, but it might be up your alley) that uses your phone to guide you on scavenger hunt-like tours around the various neighborhoods of New York. The whole point of Stray Boots is to get you to discover the local and "off the beaten path" places the city has to offer, so it might be a fun way for you to explore neighborhoods like SoHoor West Village. (www.strayboots.com)

Overall, though, don't leave the city without going to the Met :)

Aran
Thanks Maggie. The Met was definitely on the to do list but the Museum of Natural History is a great suggestion as well (as long as it's not in Washington as the map suggests ;) I'll check out stray boots as well, thanks.

answered by
Jaime from Los Angeles

Everyone wrote great recs..Here are a few more.

option 1:  Day in Nolita/Lower East Side:

-Visit the New Museum and eat lunch at Fiat Café.

- then walk downtown through Chinatown New York & the Lower East Side.

Option 2:  day on the westside... I would walk grab breakfast at The Jane Hotel - Café Gitane then walk through Chelsea (New York) + the High Line Park and check out some galleries... figure out how far you want to walk and here are some great places to eat at in the West Village while walking around the neighborhood:

Employees Only (dinner / drinks and they take reservations)

Aran
Thanks Jaime. These look great.

answered by
Sona from Newport Beach

Hello, I am from Calif, but  my best vacation was spent in NYC./Manhattan with nine friends. We hit most of the tourist spots;:

Some of us took a cab to Harlem, ate at the famous Sylvia'sand also visited The Apollo Theater We were busy, busy, busy. Another restaurant we truly enjoyed was the The Palm Restaurant food absolutely delicious. I hope you enjoy your trip as much as we did. I have never in my life seen such tall buildings, so many people nor so many  taxi cabs. We didn't like the subway, the taxi cabs were our best friends.

I go to a museum, The Metropolitan Museum of Art or Museum of Modern Artare my favorites, love to walk on the High Line Park, window shop in SoHoor the East Village (or actually shop). Eat at a really nice restaurant and see a show ( get tickets at 1/2 price booth) . Also great shows at 54 below. Just stop for coffee somewhere with outdoor seating and people watch. If you need a laugh there are many great inexpensive comedy clubs.

answered by
Bonnie from United States

Enjoy parks and farmers markets. Go to a museum and then eat in Chinatown. If you're feeling adventurous go to Flushing: http://www.seriouseats.com/2014/10/where-to-eat-chinese-best-restaurants-flushing-queens-chinatown-nyc.html

answered by
Noelle from Tampa, Florida

This site has some awesome options: