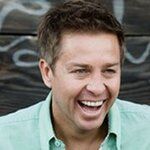 Best "sit at the bar and eat solo" restaurants?

I'll be in Manhattan on business for few days and will likely grub solo for lunch/dinner at least once. Looking for:

Any menu tips would be well received too! thanks!!

I second the  King Cole Bar 100%. It's a true New York classic and it's worth it if for no other reason then to see the Maxfield Parrish mural.

My other favorite bar in town is  Bemelmans Bar. It's another true NYC classic (with yet another famous mural--this one by Ludwig Bemelman-the man who did the illustrations for the Madeline books). If you go there on a Monday you can hear Woody Allen play clarinet (not cheap, though--tickets are about $150 but you said you wanted a splurge). A lot of artists play here but it's very hit or miss--sometimes Yanni will be playing there some times it's Rufus Wainwright (not really--I'm just using those as examples). Check﻿ ﻿﻿﻿﻿﻿﻿﻿their website﻿﻿﻿﻿﻿﻿﻿﻿ for details on the dates you're going. You can definitely get wine by the glass as well as just about any kind of drink you want. Food is more in the "Snicky Snack" range than full meals, but it's still great.

You might also want to try  The Campbell Apartment in  Grand Central Station. It is GORGEOUS!!! It's the former apartment of a big New York financier and when I was a kid there were all kinds of urban legends about this place--mostly about whether or not it actually existed. It's like an old smoking lounge/gentleman's club--you might want to order a Johnnie Walker Black here instead of wine. ;)

Admittedly  BG at Bergdorf is a bit on the feminine side, but I would still consider it. The views are CRAZY gorgeous (seriously breathtaking), the food is amazing, and the people watching is as good as it gets (The last time I was there I saw Mario Buatta and (I think) Padma Lakshmi). Not a huge bar, but it's never mobbed (unlike most mid-town New York lunch spots). I think I've only been here for lunch (try the croque monsieur) but I know they serve dinner, too.

If you'd rather do a neighborhood joint, I'd either try  Pete's Tavern or  Molly's Shebeen. Neither are glam (you might want to consider lunch here instead of dinner) but both have a lot of character and I know they have great beer. I grew up just a few blocks from both so they were always family favorites and one of those places where you'd run into everyone you know. I think you'd get a kick out of either, but I would hit Molly's first because Pete's is fairly well known.

I usually don't mention places I haven't tried, but if I were going to have a spurge meal I might consider  Eleven Madison Park Restaurant. While I haven't eaten there (yet), I can tell you it's a stunner (I've been in it--long story) and gets rave reviews from locals (my parents still live in the area and they say someone is always recommending they try it). By the way, by splurge I mean SPLURGE! I would anticipate spending at least $300-$400.

Great question JR.  Top of my list is Lupa.  Killer italian food (go with the cacio e pepe pasta).  Friendly bar staff.  Only catch is that you may have to wait a little for a seat.

PUBLIC would be another one.  i think they used the bar once in sex and the city (don't let that hold you back).  good energy, solid food.

Kingswood is a little more low key.  place gets busier and food is solid but not as good as my other 2 recommendations.  But nice place to hang for a few hours.

Carina
I always second any suggestion for a good cacio e pepe pasta...gets me every time.

Tip in NYC:  Big bar usually does not equate to good food. The best places are smaller.

For good people watching:   Eataly. It is not a restaurant, but a food market where you can get good food and drinks, and grab a spot in the center to eat and drink. Highly recommended if you are good solo. Otherwise, go with below suggestions.

Ben
You are so right. Big almost never equates to the best food in NYC!

A spot at the The Spotted Pig usually requires a long wait or a small miracle but those burgers (and everything else, really) are worth the wait.

For future reference, the Frankies are always serving up fabulous fare too: Frankies 570 in the West Village (or Frankies 457 and Prime Meats if you get out to Brooklyn) along with the great wine and atmosphere.

JR
i'm hitting Frankies in the west village for certain next time. Awesome tip. Thanks Kara!

answered first by
Ellen from Dallas

JR, the liveliest vibes are the hotel bars of the super-"in" hotels and downtown in the West Village over to SoHo. If craft beer or wine by the glass AND food are your choice, you can combine bar, appetizers and food  Eataly and you can walk over to fun bars later in the Flatiron District and Chelsea (New York) (nearby). Both are neighborhoods and have popular places on every single street and block! As it gets warmer.  Eleven Madison Park Restaurant across from Eataly is always busy. You can't miss in this area - so must great stuff!

answered by
Michael from San Francisco

Mario Batali has a restaurant near union square called Casa Mono.  Next door to it, is his "casual bar" called Bar Jamon (spanish for ham).  You can get great wine and some of the best ham in the world.  Its reminiscent of a tapas bar from Andalucia

JR
Michael check out the answer from Anthony Bourdain... he seconded your call on Casa Mono. thanks again man.

Michael
Man, I've been roaming around the world following his footsteps. I guess we do have the similar tastes!

The Smith Restaurant is my favorite place for doing just this. Also in a very central location, between Astor Pl. and Union Square, so you can meet up with people, catch a train, etc.

answered by
Susan from Manhattan Beach

While I was on a business trip last year, I ate at Babbo. I went, ate at the bar alone (probably 10 seats -- you may need to jockey for one as the restaurant is busy) and struck up a nice conversation with the person next to me. This nice man told me they had the BEST pork chops in the city -- not being a pork chop person, I ordered the diver sea scallops (which were fabulous) and had a great glass of italian red wine (the bartender steered me to a wine most similar to a pinot noir).

General location would help unless you're willing to relocate far just for lunch/dinner?

Odds are you'll be near at least one of those at some point during your trip. Enjoy!

JR
Thanks Kris. I didn't add specific location because I will be bouncing around town quite a bit... So all areas are fair game. Thanks for these!

I like Yakitori Totto on 55th Street between 7th and 8th. Upstairs. Arrive early as they don't take reservations. 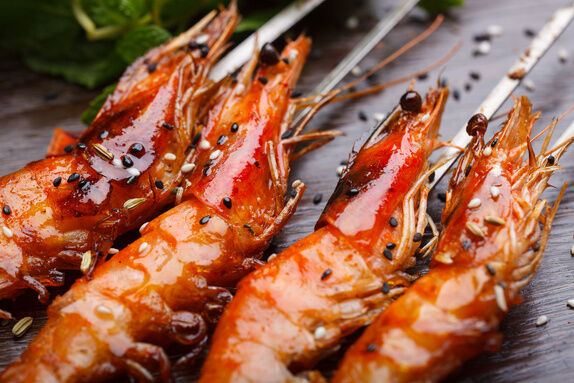 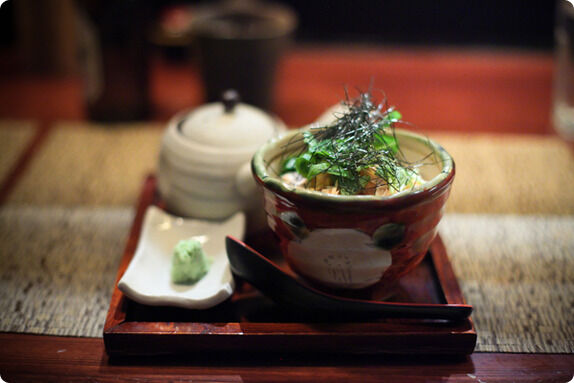 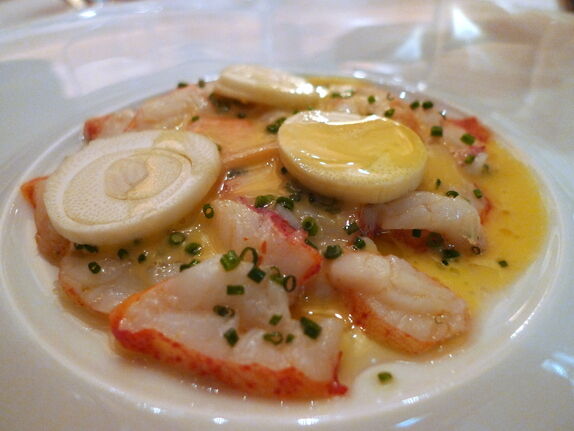 I second the motion that  Casa Mono is great. 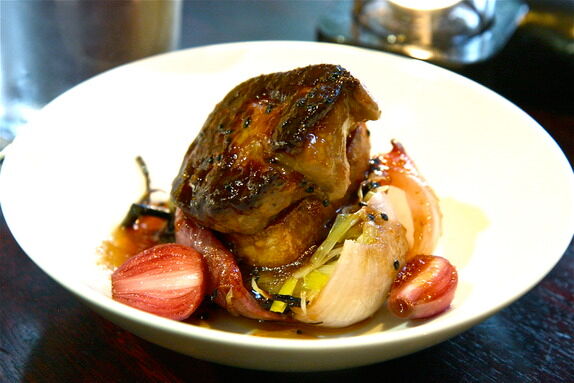 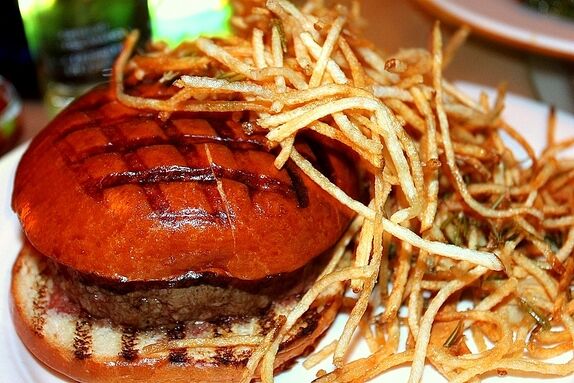 andJohn Dory Oyster Bar are excellent. Particularly the bottarga sandwich and some shellfish at The Dory. 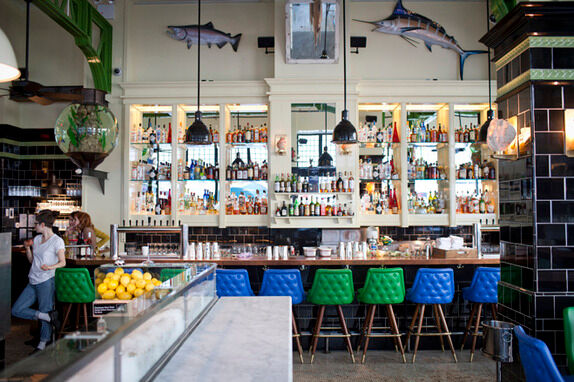 JR
Awesome. I'm going to take down as many of these as I can. Staying at the Ace Hotel so The Dory will be easy. Thanks Anthony!

Here are a couple suggestions:

Locanda Verde -- Excellent food and wine list. Large and lively bar. I prefer to eat there over a table.

The Odeon is a classic NY spot voted the best bar for dining solo, but not as lively as some of the others...

Debbie
I love when a restaurant's bar is more appealing than a table! :)

answered by
AJ from United States

I'd recommend Contra for dinner. Likely the highest food quality/hassle ratio of any spot I've run into.  Lively, but not crowded, despite strong press, they still keep comfortable vibe.  Sit by the neon sign, and you'll have the perfect perch for a solo dine.  Strong natural wine list and solid cocktails.  Have the full tasting or eat a la carte...easy.  Cooking's on the level of Blanca and Atera...but far more reasonable.  The place was made for fine dining cooks to go on their days off.  And if you want things even more lively...just take a walk outside.

I love to people watch at the King Cole Bar in the St. Regis hotel on 55th and 5th. Many great looking NYC fashion types hang out there. It is a beautiful old bar.

Honestly I lived there for almost a decade and never once felt out of place drinking or dining alone. Definitely go to the St Regis to the King Cole Bar. So gorgeous and fun. Milano's Bar on Houston is good solo. For food, somewhere with family style dining is fun. Natural Gourmet Institute on Fridays is totally worth it.

Courtney
Plus one on King Cole for sure!

answered by
Ben from Montgomery, Alabama

JR, if you want big, two places that serve good food and drinks and you don't mind eating alone at the bar (I've done this many times) Budda Khan in Chelsea (amazing food and visuals) and Bar Americain (52nd and Broadway). If you can deal with smaller local places...Edi And The Wolf in the east village and The Spotted Pig west village. The latter two will give you the local thing. Both are incredible. Enjoy!!!!

answered by
Bryan from Honolulu

Angelo's Pizza has Super Duper Excellent Pizza - and/or Extra Fine Food - Will make stuff off menu if you know what you want http://www.angelospizzany.com/index.htm

It's worth walking five blocks