Itinerary for the Peninsula of Yucatan

My sister and I are going to Mexico, more precisely in the peninsula of Yucatan in January for 3 weeks.

We both love diving, trekking, learn cultural things and local food too.

Do you have any trip itinerary or advices to help us planning our trip?

We've done this trip.  Many times.  Cancun is the cheapest place to fly in and out of and I'm sure more booze is sold and more tourist money is spent there than the whole rest of the Yucatan.  If that is not what you are looking for, I wouldn't waste much time in that area.  I don't want to plan your trip for you, but I want to give you some ideas to work around. You can decide what works for you.

We generally try to plan our trip in a loop to return to the airport with a round-trip ticket.  Cancun is the cheapest with the most flights.  Unless you must go somewhere the buses won't, we find Mexican buses to be far superior to renting and driving.  The Policia won't be pulling over your bus to collect their mordita (little bite), you don't have to put up with gas station attendants' short changing routines, and their are no $urprises when you try to use or return the rental car. You also don't wall yourself off from the world in a bus.  You have fellow travelers and locals who pass along information you can't get any other way while you swap stories, versus trapped for hours with someone equally devoid of local information.  For diving, you'll want to head, by ferry, to Cozumel (Cozumel), unless, of course, you want to take in Belize.

We usually fly in to Cancun, grab a bus, right at the airport, and head South.  It is not necessary to go into the city of Cancun where its main bus station is, or the resort area, which resembles the Las Vegas strip, if they suddenly outlawed gambling.  We try to arrange a our trip in a loop, so we wind up back at the round-trip ticket.  At the top of my list for a three week Yucatan trip would be the cities of Merida and Campeche, and the Mayan ruins of  Tulum, Calakmul, Palenque, Uxmal, and Chichén Itzá,  You might consider extending to Tikal in Guatamala, but that would cut into your three weeks.  We did Tikal on a Belize trip, but still we used the Cancun airport, both ways.

If you make it to Merida, there is a very cheap tour, from the bus station, that makes a half-day loop through about seven lesser known Mayan sites, including Uxmal, that give context and understanding to the development of the Mayan civilization.  There are also fantastic Mayan museums in Chetumal, Palenque, and Merida.  Chichen Itza is the most iconic and publicized Mayan destination, but it and Tulum are also the most crowded with tourists.  I hate spending vacation time standing in lines only to see what everyone else has already seen and even I've already seen a million times in pictures or on television. You could go to Edzna or Calakmul, just as large, and have it all to yourself.  Calakmul would require a car to see, but this would also afford the opportunity to see lesser ruins on the way. If you do that, I highly recommend spending a couple nights at Rio Bec Dreams, near Xpuhil(spelled Xpujil).  Rick and Diane, fellow Canadians, have built and maintained a novel bed and breakfast in the jungle, there, and will advise on the area sights, including the life-list spectacle of millions of bats flying out of a dry cenote while you peer over the edge.  Diane is an authority on Mayan sites of that area and Rick is a gourmet chef.

Palenque, Tikal, and Calakmul will give you the opportunity to see Spider and Howler monkeys in the wild, as well as many other indigenous animals. I've seen coati, tamandua, jaguarundi, tigrillo, tucan, great currasow, macaw, oscillated turkey, crested oropendola.

Campeche is a colonial city that walled itself to protect from pirates.  The tourist center is very picturesque with cobblestone streets, a post card zocalo with salt and pepper bell towers on the cathedral, nightly cultural events and a lively outdoor mercado just outside the walls. Just to its north is Celestun, an everglades-like preserve with small guided boat tours that is home to thousands of flamingo. Also a nice sandy beach with seafood restaurants.

Merida is the European flavored capital of the Yucatan with a Mayan heart and a second choice to fly in and out of.  If it saves days on your itinerary, it might be worth the extra cost.  It was a Mayan capital, as evidenced by its many zocalos, where something is happening every night in one or more of them.  Many older Mexican cities are built around a central square with adjoining Catholic church or cathedral, and often a bank, of the same stone.  When the conquistadors arrived and conquered, they usually tore down the Mayan pyramids to use as building materials, erected their church and Spanish bank, and the remaining central square was where the pyramid used to sit.  They were very much into showing "who's boss."  Merida's many squares are testament to how large a Mayan center this once was. (And still is, most of the locals are of Mayan descent.)  This is a very enjoyable city, plenty to see. Get a place near the main square and it will be walkable.  Don't spend much for your room, because you will be out doing stuff.  They have a good English library, a large zoo with Mexican animals, a huge indoor mercado.  If you visit the afore-mentioned archeological museum, for a cultural observation, visit the nearby Wal-mart.  We wound up spending an hour in there just cataloging the modifications of the American template to fit the Mexican way.  If you want a little beach time, Carretera Merida-Progreso is just a 15 minute bus ride, leaving several times an hour. 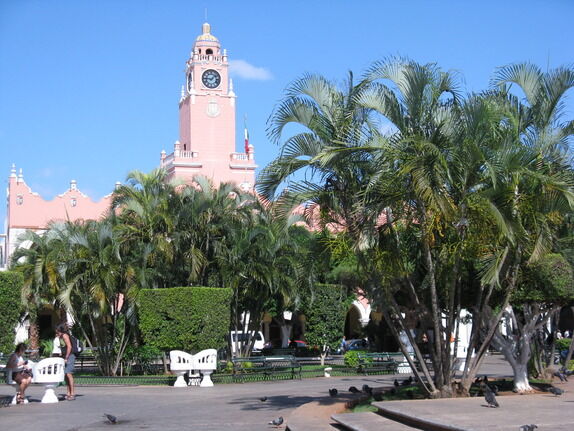 On your trip, don't drink the water, or brush your teeth with it.  Use bottled water, soda, or beer.  I've had no problems with street food, and I recommend it for authenticity, flavor, and quality (and price!) over the places where locals don't eat.  My favorite foods from the Yucatan are pollo con mole, cochinita pibil, Poc Chuc, deep fried plantains, Mexican papayas, and Mexican coffee, tamarindo, horchata, or almost any kind of licquado.  If you make it to Belize, conch. Anywhere on the coast, ceviche. So far, a specialty that I have not yet sampled is the queso  relleno.  Probably won't find those on the street.

If you are going to do a lot more than diving, I would not bring the equipment; rent it and relieve yourself of lugging it around for the rest of the trip.  We took snorkel equipment in a dive bag on a Belize trip once and were able to store it in a bus station locker room in a city we were doubling back through for part of that trip, but all in all, the baggage fees and hassle make it more trouble than it's worth. 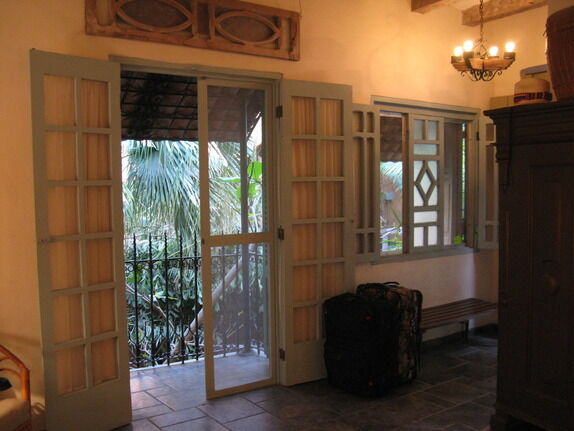 You could easily spend three weeks diving or three weeks doing the rest of the Yucatan.  I would suggest both and only drag the equipment for one of two trips.  The full Moon in Feb-Mar is the prime time to see whale sharks off Placencia, Belize although I've failed on two attempts.  The equinox is when the snake forms on Chichen Itza's steps, but otherwise, January is a perfect time to go.  I think if you take one trip to Cancun or Playa del Carmen, that may sasitfy you for your lifetime, but if you get out to the real Mexico and Yucatan, you'll want to return again and again.  Try to map out your trip, including how much time to spend where, but don't make it ironclad.  Spend more time where you like it and see there is more to do.  If you can order the direction of your loop so the mutually-agreed lower priority stops can be jettisoned, if necessary, you will not only have plenty of flexibility, but also something to bring you back.

Davi
Thanks so much Ed for your recommandations !

Don't miss the hidden gem on the coast -Laguna Bacalar, it doesn't get visited much, doesn't have crowds of tourists like other more popular coastal places, but it's really beautiful and chill. I wrote a post about it here ;) Enjoy!

answered by
Ana from Germany

1 Day:You should visit Xcaret There you can swim in underwater tunnels, you can also snorkel there but I wouldn't recomend that because there are better places to do that. You can also go to a river and see how the people lived there before. In the night there is a show and it is worth everything you pay for the entrance to the park... It is really good.

1 Day: Xplor Park This park is full of adrenaline, there are a lot of Zip Line Activities. You can also swim in underwater tunnels and you can drive an amphibious vehicles.

1 Day: YOU NEED TO GO TO Chichén Itzá It is a mayan pyramyd

1 Day: Coba An archeological zone. You can rent a bicycle in order to visit all the place.Tulum A pyramyd at the sea! There you can take a boat trip to go snorkeling and to see the archeological structure from the sea.When you finish there, you can go to Akumal where you can swim with Turtles.

1 Day: Chan Cenote and Cenote Celentun. A cenote is a water hole, there you can swim. They are beautiful.

Isla Mujeres There you can do all kind of acuatic sports. There is also a subacuatic museum. Depending on the time you go there, you can swim with whale sharks.

3 Days: Holbox Island Depending on the time of the year, you can swim with whale sharks. It is the best experience ever. You can also see rays and doplphins in their natural enviroment. The beach there is amazing and the sunsets are the best. It is not as known as Isla Mujeres but in my opinion that is better. There you can also see flamingos.

You also take some time to visit Merida a beautiful city,

If you like clubs, you can go to Coco Bongo or to Mamita's Beach Club

answered by
Kira from Los Angeles

Quintana Roo is a region I also love and there are tons of opportunities to go diving and trekking there.

Playa del Carmen is my favorite area. The Palm at Playa is my favorite hotel there, but it's pricy. If you're looking for something cheaper I also like the Illusion Boutique Hotel.

answered by
Tess from Columbus

Ed and others have offered great suggestions. For food, be sure to try Poc Chuc, Cochinita Pibil, Pollo Pibil, Sopa de Lima, panuchos, salbutes and Huevos Motulenos. The licuados are also refreshing. I also like the smaller villages, but while I agree that the buses are pretty good, if you want to see things at your own pace and on your own schedule, a car is handy - even if you use it for just a few days. Don't miss Sunday in Merida. Valladolid is a charming town near the site of EkBalam. There are a few cenotes nearby and many south of Merida. I don't think that you can go wrong no matter what you do in the Yucatan. Enjoy your trip.