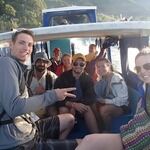 Most affordable way from Manila to Ho Chi Minh city?

Two buddies and I are planning a backpacking tour of Asia over winter break and we’re looking for the best and most affordable way to get from Manila to Ho Chi Minh City. Would that be by boat or by plane? How long does the boat take and how do you get from the port into the city?

top answer by
Jaakko from Finland

These days flights are the cheapest and easiest way to go. Even internal travel between the islands in the Philippines is done by flights (distances massively shorter than Manila to Ho Chi Minh City). People won't sit days on a boat if they can do the same trip in a few hours on a plane to save only a small amount of money.

Long distance ferries between the islands (Say for example Manila to Bohol) do exist but they run only once or twice a week. Most of the boat lines everywhere in the world have died out because flying is often just a tiny bit more expensive than taking some other "slow" transport (train, bus, boat) and flying does save you a lot of time.

answered by
Rosa Lea from Philippines

In Manila, go to Ninoy Aquino International Airport (MNL) Terminal 3 where you could book your flight to Ho Chi Minh City.  The flight will take 3 hours, more or less.  Enjoy!

I'm not sure how to go there by boat. But by plane, it takes more than 2 hours.You can book tickets at https://www.cebupacificair.com/. The regular fare is around Php14,000 or USD320. It's a low cost carrier and they give crazy discounts sometimes (usually at midnight on a Philippine Holiday), we once got our tickets for Php5,000 or roughly USD115. Note though that you have to pay for travel tax at the Manila airport, which is at Php1,620 or about USD37.

I have flown between Manila and Ho Chi Minh City several times over the past 4-5 years and the cheap flight is Cebu Pacific.

It's a late night flight which can be a bit annoying but I have never had any problems finding a fare for under 100 dollars on that route and the plane has mostly been fairly empty.

While Air Asia is great in some parts of Asia they kinda such in the Philippines for now as most of their flights are to and from Clark International Airport (CRK) which is way out of Manila and only really suitable for the people going to the northern part of Luzon or the sex tourists heading to Angeles City.

I would recommend flying as it shouldn't cost more than $300 at the MOST. I visit Vietnam quite often and have felt a lot safer on any plane than I ever did on anything that was floating in the water :).

answered by
emil from Quezon City

I agree to explore any of the budget airlines. PAL Express or Cebu Pacific. If you book you flights 2 weeks early, its almost half the price compared if you book a few days before.

answered first by
Karlo from Philippines

The cheapest I know is via Cebu Pacific airlines. Www.cebupacificair.com They sometimes have promo fares  to HCMC that are only arounf usd50 roundtrip. Regular rate is probably around usd200-300.

Try checking the site during Philippine holidays. Normally they have their promos at that time. the rates vary so you can check from time to time.

Haven't heard of taking a boat ride from Manila, and I'm sure it wont be too much of a difference from an airline promo fare.

There are a few options for this. You can take Tiger Airlines out of the old US Military base called Clark Airport or you can take any number of airlines out of Manila. The time of year and airlines you choose will dictate the price.

Almost all of the airlines from Manila will fly to Vietnam. Cebu Pacific, Philippine Airlines and the new Zest Airlines all go their. The time of year will dictate the price.

answered by
sole from Bacolod

I don't know of any boat from Manila to Ho Chi Minh City, so your only option would be to fly. There are two airlines offering direct flights daily:

Cebu Pacific - This is a budget carrier and is normally the cheapest option.

I suggest you 'test-book' both airlines to compare the actual fares since the fares initially quoted are exclusive of taxes and other fees. Sometimes, you also have to pay additional fees for your baggage. (It's better to pay for this during booking rather than having to pay exorbitant fees at the airport.)

answered by
Pejman from Vancouver

I tried looking into this last year myself, but the plane tickets were ridiculous for such a short distance.

I would find a cheap hop to Hong Kong, and cross over through china. There is so many beautiful places to see in southern China as well.

If your time constrained, Flying is your best bet.

answered by
Joanna from Metro Manila

Hmm, I'm sure there are cruises that will take you from Manila to HCM, but most Filipinos travel by plane since it's cheaper. Try finding flights through Cebu Pacific, Philippine Airlines, AirAsia, or Tiger Air.

answered by
dinhoecotour from Vietnam
I would take a flight!

answered by
Melissa from Metro Manila

I've never tried taking a boat but I would definitely take the plane, Cebu Pacific or Air Asia has cheap flights going there everyday. I suggest you plan early and determine when you're flying to Ho Chi Minh. Just follow the Twitter accounts of the two airlines to check out when they release their seat sales and book during promos, but promo fares are usually non-refundable and non-transferrable so just be sure when you make the booking. Let's hope you all type fast, those seats come and go pretty quick; you wouldn't want any one of you to pay the regular fare once you've seen how cheap those promo fares are.

answered by
Toto from Honolulu

Has to be by plane.  Too far for a ferry.  You can check Cebu Pacific Air or Philippine Airlines.

answered by
Jam from Siem Reap

Check out the budget flights at www.cebupacificair.com