What is there to do in January in Los Angeles and where to stay?

Hi, we're planning a trip to LA in mid January. What's the best things to do in winter in LA? Are the amusement parks open? What about baseball games or basketball games? Also where's the safest places to stay?

LA's climate is generally pretty mild in the winter as well, so your options are certainly not limited by the weather. Instead of Hollywood, consider West LA - Malibu Beach, Santa Monica, etc. Safest places to stay would be in West Los Angeles!

Is it ever really winter in LA? There's really no such thing as things shutting down for winter. We have been experiencing ugly weather recently, but for people from California that usually just means overcast skies. I know... we're spoiled haha. That was my long way of saying don't worry, amusement parks are definitely open, there are broadway plays, shows are filming (you can check out this trippy question for info on how to get free tickets: http://www.trippy.com/question/Los-Angeles-Where-are-the-best-areas-in-Los-Angeles-to-see-a-show-being-filmed-in-July.

There are many safe places to stay in LA, I don't know you're budget or if you will have a car, but I would suggest staying someone central because you don't want to spend your vacation in LA traffic (getting on the freeway is no fun). The following areas are good places that are centrally located:

- Santa Monica - more out of the way considering it's by the water, but still only 25 minutes from Hollywood

For things to do:

- Museums: LACMA and Getty Museum are my favorite

- Touristy things to do that are fun: Hollywood Walk of fame, Venice Beach Boardwalk, Third Street Promenade, Farmers Market at the Grove

- Runyon Canyon Park is a great hike for an amazing view and also if you want to feel more like a local.

These are just a few, I hope this helps.

For detailed restaurant reviews and recommendations in LA, check out my blog: Eat and Escape.

answered by
Irene from Covina

Winter-ha! No such thing! For us it's freezing which means the temps are probably in the 60's daytime but nights do get cold. All amusement parks are open, Disneyland is in Anaheim and that's about 45 minutes away. L.A. Live is an outdoor shopping, food and entertainment area right in downtown.  Museum of Comtemparary Art is great as is the Griffith Observatory. If there's snow in the mountains it's an easy day trip or you can stay overnight.

January is a great time to visit LA!

There's a dineLA Restaurant Week in the second half of the month, so you can check out some of LA's best restaurants at a fraction of the cost.

Everything is open as far as amusement parks go, and actually less crowded since the holidays will have just passed. (NEVER go during the holidays - that's just craziness)

Laker and Clipper season will be underway, check out Goldstar.com for discounted tickets. Go Clippers!

As far as where to stay goes - it depends on what you're looking for. The new Ace Hotel Los Angeles puts you in an up and coming part of town, but there are still some streets that you won't want to walk down at night. The Palihotel Melrose or Farmer's Daughter Hotel are very boutiquey and that's a great little part of town that has a lot of everything and is totally safe. On the west side, the Viceroy Santa Monica is a swanky little oasis and the west side (aka Santa Monica) in general is very clean and safe, but beware of tourists. 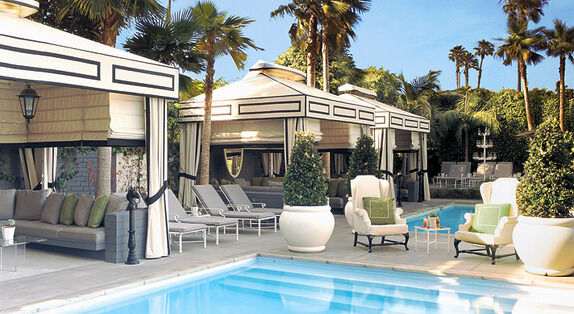 Hope that helps! Enjoy your #TrippyTravels!