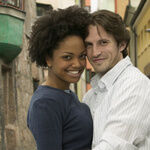 What are the best modern sites in London?

I've been to London quite a bit in the past few years and dig it but I feel as if everything I've seen has been old. I'm returning this year and as much as I appreciate old London, would like to experience some of modern London, if there is such a thing. I'm thinking architecture but also, I'd like to see some modern art galleries, modern restaurants, museums. etc., so any suggestions would be great.

Ok, so I'm not even going to attempt to compete with that. Phew! He's as long winded as I normally am. :)

For views and something fun, check out the Emirates Cable Car - my local London friends love it. http://www.tfl.gov.uk/modalpages/23863.aspx

Also, go see the Gherkin. It's the second tallest building in London and a very modern icon. There's a restaurant/bar at the top and more amazing views of the city. http://www.30stmaryaxe.com/

Andy
Thank you for the suggestions Tiffany!

The Tate Modern is a wonderful modern art museum that turned and old power station into a great destination.  Of course for architecture there are new buildings like the Gherkin and The Shard to go see, also the area around Canary Wharf has been redone as well.  Also there are wonderful updates to old structures, like King's Cross Station for example.

Andy
Awesome, Howard. Thank you for the suggestions!

Tate Britain's a nice and modern art gallery (tip: the cafe at the top gives amazing views). You might also want to take a trip on the Emirates Air Line - a relatively pointless cable-car over the Thames River - which is next to  The O2 Arena, a large concert venue. Take a DLR train to Canary Wharf - it's an automatic train, so sit at the front and pretend you're driving, and you'll be taken into a brand new financial district (with some good shopping, in fact). Come back on the Underground for some good transport architecture if you like that sort of thing. Sneak into the BBC's new BBC Broadcasting House for a coffee in the café (open to the public) and peer down into the busy newsroom, or book a studio tour. I could go on...

Andy
These all sound awesome. Thank you James!

answered by
Phil from London

answered by
Mario from Columbus

I like modern things, too. I used to live in the UK, so I get what you are saying. London is an old city, but has a lot of modern things to do. There is the famous Gherkin building to tour. Tate Modern is an amazing showcase of modern art. Museum Of Brands, Packaging & Advertising in Notting Hill is fun, too. Soho has a lot of modern restaurants and bars to go to that are not necessarily "traditionally British." Covent Garden Market is a mixture of modern & old, too. I hope this helps! Cheers!

answered by
Pedro from London

Check out the  The Crystal by Siemens. A sustainable cities initiative. It's a stunning building in East London.

top answer by
Daryl from Boulder

Well the city of London - the square mile - houses some wonderful modern architecture including ' Gherkin' and Lloyd's of London.  Also The Shardat London Bridge is probably the most visible new addition to the London skyline and Europes tallest skyscraper.  The East (including the Olympics site and the Museum of London Docklands) probably have the most interesting recent architecture.  Canary Wharf at the heart of the Docklands is London's closest new(ish) highrise commercial hub and is next to The O2 Arena or The Millennium Dome. Other interesting 'modern' developments include St Katharine Docks, Barbican Art Gallery and Covent Garden Market (a 1980's retail and public space revdevelopment of an inner city ghetto... now much gentrified). Watch out most modern development is designed to imitate a former time and so might not appear modern.

Orient yourself with the river but be careful in guessing distances aboveground when using the underground map.  In the center many Tube stations are within 5 minutes walk of one another but you'd never guess from the tube map. Use the Docklands Light Rail to navigate the east and Double Deckers also - get an Oyster travel card for your visit unless you're loaded then just call upon a London Cab driver to give you the grand tour - they're amazing sources of information about the city.

Ultimately London's architecture is an amazing tapestry of every imaginable architectural style. Mock and real Medieval/Tudor, Baroque, Neo-Romantic, Georgian, Victorian, Edwardian, Modern and Post-Modern (did I miss an era? London has it). No single area is dominated by any one theme, although the West is classically Georgian and suburbs Victorian but the center (The West End & The City) has it all and it's often the stark contrast of old and new side by side (often in holes blown out by WWII bombs).  So Lloyds of London or the Girkin sit strangely by Sir Christopher Wren Churches, the ultra modern Millennium Bridge bridge straddles the Thames River between the 17th Century Saint Paul's Cathedral (do check out Paternoster Square) and a 19th Century power station converted into a Modern Art museum - Tate Modern (awesome btw!)- which is free like most of London's other top museums.  In doing the Thames Walk between  House Of Parliament and City Hall (Greater London Authority) (opposite the Tower) is a great way to take in the King's Cross Station and St Pancras Station have both also recently had facelifts including the amazing St. Pancras Renaissance London Hotel.

I would say - make sure you discover the tranquil green spaces hidden through alley ways and behind intimidating gates.  Lincoln's Inn Fields and hundreds more cherished spaces are a world away from the noisy streets they lead off from.

The OXO Restaurant, Bar and Brasserie has a restaurant with several movie moments and you can catch a glimpse of the London skyline at night - make sure to reserve a table by the north facing windows otherwise its not worth it.  IMHO London's best views for restaurants come at a premium of overpriced average food.  Hunt down the celebrity chef restaurants like Ramseys.  Of course, the best food one can have in London is an Indian and for that I'd recommend any around Brick Lane just east of Liverpool Street London Underground Station.

Enjoy London... hope some of this helps!

Courtney
Wow, what an insanely awesome answer!!! I'm coming to you for all my London questions!!!!

Andy
Amazing, Daryl. Thank you so much. I'm going to need a couple more days (or weeks) to see and experience everything!