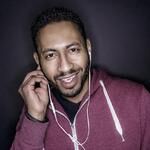 I am looking to experience true English cuisine.  Any place your recommend on a budget?  Are there any types of food I should try?  Thanks

answered by
Caitlin from Boston

There are a ton of gastro pubs in London where you can experience true English cuisine that isn't too expensive. I've provided a few places with typical English pub food, but there is amazing Indian in London too!

Sunday Roast: Ship Tavern: http://www.theshiptavern.co.uk/ A standard British Sunday roast, there is usually a band at the bar too.

Weekday dinner and drinks: The Jugged Hare: http://www.thejuggedhare.com/ . It has a big post work crowd, and a busy bar, but the restaurant in the back is awesome. Def order the Jugged Hare, the seafood is also great!

Weekend dinner and drinks: The Princess of Shoreditch in Shoreditch: ﻿http://www.theprincessofshoreditch.com/﻿. Small standard gastro pub with an amazing beer list and even better food. If you go here, try The Book Club for drinks after! http://www.wearetbc.com/

Carina
I am so intrigued by a restaurant called 'The Book Club'. I'm an English major- I've got to check it out!

answered by
Gianna from Curitiba

Pubs are always the best choice for budget meals! ;)

answered by
Mark Emil from Denmark

Go to St. John Bread & Wine or one of the other places runs by Fergus Henderson!

answered by
Keith from United Kingdom

The best traditional food you will find in London is at,

The rib of beef for two to share is the best.

answered by
Jonathan from United Kingdom

I recently ate at Blackfoot (Blackfoot) in Exmouth Market. Rally good value and great food in a relaxed atmosphere.﻿

I know everyone always says that the food in the U.K. isn't great but I've had great food in London. I would start with fish and chips at  Laughing Halibut. It's a little rough round the edges and you have to venture out a bit to get there but they make insane fish and chips. Very cheap, too.

One of the best meals I've ever had in London was at  Ye Olde Cheshire Cheese which is London's oldest bar. I think it was some kind of mushroom casserole which I know sounds horrible but it was great.

If you've never tried cider before you might want to give it a go at any of the local pubs. I wasn't a huge fan of it, but I think I'm in the minority.

You also might want to try at Scotch Egg which to me has always seemed like one of the most disgusting things you'd ever want to try (it's basically an egg surrounded by sausage surrounded by bread crumbs or something like that), but when in Rome... One of my favorite pubs, The George supposedly has a good one, but I wouldn't know because I wouldn't try it if you paid me. That said, I can vouch for their fish and chips which are fabulous.

Tayyabs has insanely great Pakistani/Indian food but it's seriously hot so consider yourself warned. Also, the lines here can be long so plan accordingly! 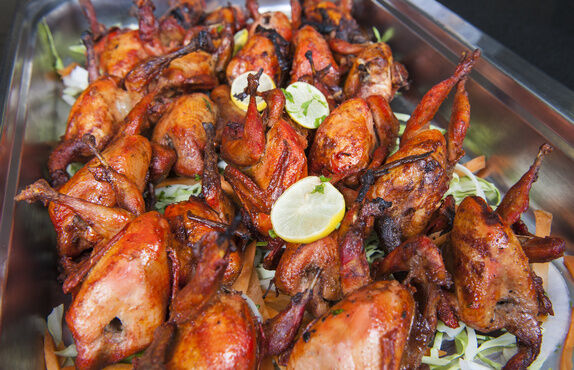 Of course, make sure you check out the restaurants on  King's Road. It's literally one incredible Indian restaurant after another and all very inexpensive.

Of course, you can't go to London and not have afternoon tea. I would try  Fountain Restaurant at  Fortnum & Mason. Even though it's not a cheap place you can order by the piece there in the afternoon which is nice. Great people watching here if you're into that.

The  Harrods Food Halls are absolutely amazingly beautiful but I've found the actual food itself to be overpriced and not that great. For more reasonable prices and frankly, better food, I would try the food hall at  Selfridges.

Rules is London's oldest restaurant and a total treat. If you watch Downton Abbey you'll recognize it as the restaurant where Edith meets her editor. 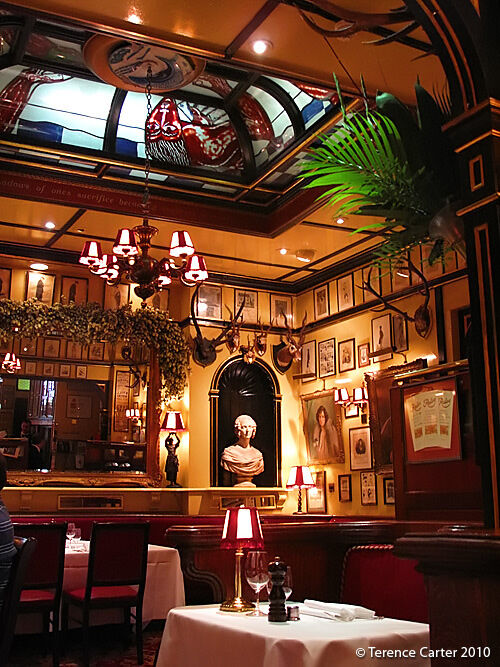 Finally, for a great English breakfast, do NOT miss the  Regency Cafe. I cannot tell you how much I love this place. It's an old vintage diner and they serve a great, super cheap breakfast. Just be ready to have to wait for a table as it gets really, really crowded!

Eva
I second Ye Olde Cheshire Cheese, and the food halls at Selfridges and Harrods, and Fortnum and Mason is a wonder to behold.

Hussam
O my, Tayyabs. I think I am going again. Thanks for the tip.

There are two things you should try, which aren't expensive.

answered by
Paulo from Belo Horizonte

answered by
Jaak from Estonia

It's hard to find any good british food, so here are some more international suggestions from Soho and surrounding areas :)

Good Japanese Yakitori (good grilled sqewered food) place in Soho - Bincho Yakitori http://www.bincho.co.uk/, so far I have managed to get a small table without booking.

Nice Thai chain, has places all around the city, somehow I happen to visit them once every time I visit London - http://busaba.com/, in busy hours you might need to wait 10-15 min, they do booking only for big groups.

Another Japanese non-sushi place next to The British Museum. In Abeno you get Okonomiyaki (Japanese version of omelette and pancake mix) made in front of you, beware, your clothes will be smelling of food later. Very tasty! - http://www.abeno.co.uk/, tiny place, better call ahead.

Very nice active vibe and hommos is in a Lebanon place called Yalla Yalla - http://www.yalla-yalla.co.uk/, I prefer the Winsley street location, it's quite near the Oxford Circus, can be quite busy after office hours.

All these places should fit in the average tourist budget, nothing too posh :)

If you are looking for more British food I suggest you try some of the many gastropubs, you might get lucky.. or not. I used to really like visiting The Eagle (The Ea﻿gle), but recent reviews don't sound promising. If you do go there, do try to arrive on time, they serve only for couple hours.

Debbie
Hey Jaak, great to see you on Trippy again. AMAZING recommendations! Just FYI -- I helped you geo-tag all the places that you mentioned so that they appear on that cool-looking map next to your answer :) You can do this yourself, too, by simply typing the @-symbol and then the name of the place as you type your answer!

answered by
Chening from Ann Arbor

Obviously you should try some good Fish and Chips :) Try the Two Brothers Fish Restaurant near Regents Park Road. It's really really good.

answered by
Russ from Ohio

Most upscale Pubs have typical good English food such as bangers & mash and fish & chips. Check out Vacation rentals by owner which I've used last year in London and got a great full 2 bedroom apartment for less than a mid range hotel.

Hussam
Thanks Russ. I will check it out.
comments (1)
likes (1) thanks

answered by
Shelly from Denver

we just spent a week in London and explored the food and street markets. Borough Market was our favorite large market for food and two local street markets we loved were Venn Street (http://www.vennstreetmarket.co.uk/) Market and Maltby Street Market Rope Walk (http://www.maltby.st/). Have fun!