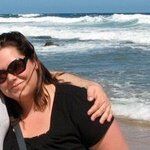 We will be in London Friday & Saturday evening in early September. We are looking for something fun to do Saturday after about 5pm until about 10pm (have an early flight the next day). Maybe a favorite pub for fish & chips, an individual tour of something (we're seeing all the usual suspects during the days, i.e. Buckingham Palace, tower bridge, Big Ben, etc). We're looking for somewhere we can go & eat & do something that doesn't involve joining a tour group.  We are 35, married, no kids, not big partiers, but enjoy a good beer or whiskey & good food.  No real budget here, but probably wouldn't want to spend more than a few $100.

answered by
Lisa from Tampa

Go to Covent Garden Market and grab a drink at Punch & Judy pub. Very quint essentially british. And there are tons of outdoor vendors who sell everything under the sun. Also there are street performers and lots of place to eat/drink. Gotta grab a Ben's Cookies while you're there, they are the 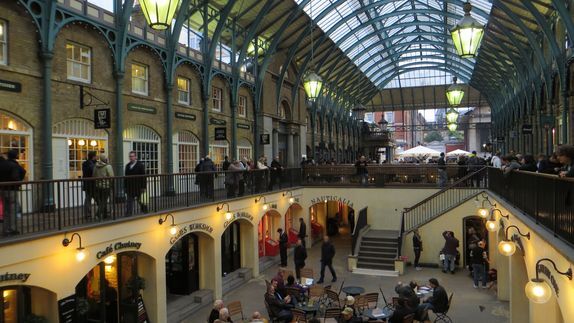 answered by
Edward from London

Where are you staying? It will really inform what you do In 5 hours. September can be changeable, so you might want to play by ear. It could be freezing, could be sunny. I'd have a couple of things up your sleeve. The river by shad Thames is nice, close to tower bridge, some good restaurants the Chop House near Shad Thames is very nice, great views of the bridge. Browns Restaurant & Bar does cocktails and champaign and often has a live piano. there are also nice pubs and bars on Bermondsey Street, and a great tapas place called José, and it's all walkable. Also close to london bridge, so you can tube home at 10. I like to do this on a Saturday night.

You've knocked my 1st suggestion out which would be a London Walk covering the pubs or a Jack the Ripper walk.  It also doesn't sound like you're interested in a show but if you change your mind, you can stop by the TKTS booth in Leicester Square and get 1/2 price tickets for a variety of shows.

A lot of fish and chip places don't stay open terribly late, I think Laughing Halibut stays open until 8pm and is my usual stop.  You might also check out The Golden Hind, not the ship but the restaurant up near Bond Street which is a little nicer atmosphere than the Laughing Halibut.  I'm going to guess than LH doesn't serve alcohol and that GH does.  You might also think about just a pub that serves food, the JD Wetherspoon chain serves decent food in a variety of locations

If you want to have a nicer meal, consider Rules, the oldest restaurant in London, tons of atmosphere, good food.  Hawksmoor is another steak place that I've tried and enjoyed, I think they have a special pre theater timed menu that won't break the budget.

Edward
I don't mean to detract from your answer, but weatherspoons isn't very nice. There are plenty of much nicer pubs, on almost any street in London. Weatherspoons is a chain, and whilst it's cheap, it's all the same, and generally devoid of soul. Some are ok, most are not. Look on a site like 'beer in the evening' to find a quality place.

Dabs
My local London friends always recommend them, personally I've only been to one when I met up with some of them and I thought it was fine, some they recommend more highly than others. I do agree that there are nicer pubs but not necessarily ones that serve food (or at least I haven't tried it at most).

Dabs
I'll agree that they are not exceptional. I'd probably pick a place like Rules or an Indian restaurant like Tayyabs. Fish and chips is a good lunch option as many of the places in London aren't terribly fancy. Maybe grab F&C and then head to a nice pub for drinks after.

answered by
Susan from Boston

It sort of depends where you are staying, but I would say, start your evening with a coffee and snack at the Café In The Crypt in the basement of St Martin in the Fields Church. Right in Trafalgar Square, across from the National Gallery, take the #24 Bus going to Hampstead and you can get off at Camden Market and experience the Horse Tunnel Market crafts/ everything before and grab some awesome street food. Get back on the #24 and go a couple more stops and get off at the Mansfield Road. There is an great restaurant called Ravel's Bistro, a small neighborhood place with great food. The trip is not as daunting as it sounds and you can walk up to Belsize Park and get the tube back to where you need to be for a faster trip.

answered by
Claire from London

Hey Jennifer, these guys do really fun and unique experiences if you're into photography: http://www.foto-ruta.co.uk/. I think the Saturday tour we did was from 2-6pm but you should try getting in touch as they were really flexible and friendly. The Foto Ruta Clue is what we did - so much fun and I really enjoyed the time at the end where we looked at our photos over a free glass of wine (I was surprised at how much my photography improved from just this one experience - I'm very much an amateur!)

Jennifer
Wow! What a great idea. I would have never thought of something like this. Thank!!!

Jennifer
As someone who lives in London, any favorite restaurants you can recommend? Either just great food & atmosphere or maybe even something classical & quintessentially British?
comments (3)
likes (4) thanks

Head on over to Soho , Leichester Square, Covent Garden area.  There are tons of restaurants and drinking establishments.  Some of my favorites:   Hawksmoor for steak - second location off Regent Street too -- Hawksmoor.  They are very expensive - but have an less expensive "pre- theater" menu.  There is a giant burger, chips (fries) 2 side dishes & dessert for £26.  Big enough for two to share.   Probably the best burger I have ever eaten!  Polpo is Italian tapas - no reservations so go early.  Bocca Di Lupo is a wonderful hidden gem on Archer St in Soho.  Amazing Italian food - sit at the chefs bar if you can.  Make reservations.  The National Gallery at Trafalger  Square may be open - and it's free.  You can walk the Thames or take a river taxi for a lovely view of the city. Just head over to Embankment Pier.  i am sorry to report that the pubs / fish and chips are generally mediocre and you really have to seek out the good ones.  I can't think of a really great one in this area.  Have drinks in the pubs - but may be best to stay away from the dining.  Chotto Matte is Peruvian Fusion and a very cool spot.  For dessert Bill's Restaurant try the Etons Mess if you love strawberry & meringue.  There are several locations and their food is  terrific for a very reasonable cost.  Princi is a really fun pizza & fresh salad, sandwich, breakfast place.  Yautcha is an Asian fusion and very cool.  Crazy amazing desserts too.  Have a cocktail W London Hotel - worth a peek as the design and scene is usually very fun and interesting on the weekends. Have an amazing trip!

Debbie
Amazing recommendations as always, Colleen! I think we would eat well together :)

top answer by
Julie from Singapore

A stroll along the South Bank is always a great London experience - between Waterloo and London Bridge.  If you wanted to do this I recommend a fabulous gastrobpub, The Anchor & Hope near Waterloo station.  You can't make reservations and its always busy but it is worth going in and having a drink in the bar while you wait for a table. The food is worth the wait!

However, if you've got some time there are so many great parts of London a little ways out of the central area. A few I would recommend are Notting HillHampstead Village, and Brick Lane.  All three of these are easily accessible on the tube.

Alex
Awesome ideas Julie! The Southbank is my favourite place to go on weekend nights too! Take note that the BOB Lobster truck is parked in Borough Market on weekends, lots of great places to explore in and around the market too inlcuding the delectable Roast! The bar at the Tate Modern is also excellent for a drink (great wine list) and the views are unbeatable. The southbank promenade is possibly the most pleasant walk in London too!

answered by
Kingsley from London

defo see a show! They do tend to end a little later than your 10pm bedtime but look at plays and comedies like 39 Steps at the Criterion Theatre 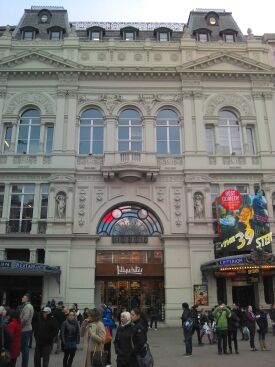 , The Play that Goes Wrongat the  The Duchess Theatre, My Night With Reg at the  Donmar Warehouse which all end before 21:45. Most shows start at 19:30 which gives you a chance grab some food at a nearby restaurant beforehand - but make it nearby: don't want to be rushing across London on a full stomach! For more hints download the ebook at http://www.theatrebreaks.co.uk/london-theatre-book

Take in a show! Leicester Square and the West End have top notch theater and it would be a shame to miss one. I was just in London last week and, currently, some of the shows include Les Miserables; the Lion King; the old classic The 39 Steps; War Horse; Charlie and the Chocolate Factory; Wicked; Michael Jackson's Thriller; and so many others. I actually saw The Curious Incident of the Dog in the Nighttime which was derived from the book of the same and I thought it was quite, quite good.

If you find yourself over near the Hyde Park area, try The Victoria Pub for great fish and chips and Ghost Ship ale.

Have a wonderful trip!

answered by
Emma from Jersey

Time Out online is a really good resource as it lists everything (pretty much) that is going on.

Michael
When I arrive at Heathrow, a Time Out magazine is my first purchase, followed shortly by an Oyster Pass (usually for a week of transportation in Central London. The pass also gives me a break on the ticket price from-and-to the airport). The one-hour tube ride to Central London gives me a chance to read the latest options in entertainment, museum attractions and dining options.
comments (1)
likes (1) thanks

answered by
Jamie from San Francisco

I would recommend taking a casual stroll through some of the great London museums.  They're almost all free, which means you can just walk right in, look around and take in the experience for about 30 minutes, and get on your way.  Contrast this with expensive museums where you feel obligated to spend hours there to justify waiting in line and buying a ticket, I've found this to be a really refreshing way to enjoy museums, and those in London are some of the best in the world.

The The British Museum and Victoria & Albert Museum museum are open late on Friday evenings, and the Tate Modern is open late both Friday and Saturday evenings.

There's a great list of attractions and food recommendations (including Fish 'n Chips shops) that we at WhereFare have compiled here: https://www.wherefare.co/guides/london?source=f