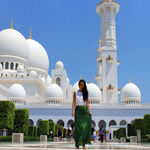 What are the best places to visit in Japan?

I'm staying a week in Tokyo and then moving to Osaka for another week, but I'm also planning two day-trips (Nikko and Fuji Mount) from the first city and two day-trips (Kyoto and Nara) from the second one.

I'd like to hear some suggestions or thoughts on the best way to make the most of my days in Japan, like things to see, to do and to eat. Also, I'd like to know if public transport in these cities is good enough (and cheap enough) for day trips.

Thank you in advance for your help!

I'd suggest you get a JR rail pass as you'll be travelling inter-city.They can only be bought outside Japan and are for temporary visitors. There is a JTB office in Milan. You can buy 7, 14 or 21 day passes and can go superior or ordinary class. It will cover you for all JR shinkansen except Nozomi and Mizuto. Will also cover Tokyo monorail, JR buses and JR ferry to Miyajima. They are good value and convenient. Ame-mura in Osaka is interesting for shopping and quirky fashion.Lots of little izakayas and shokudos to eat cheaply and try Japanese food. Osaka people are food obsessed!! Rather than Osaka Castle, which was destroyed in WW2 and rebuilt out of concrete, I'd suggest a train trip to Himeji and visit the castle there. Only a short walk from the station and much more interesting and original-look for the hidden level. If you get to Hiroshima (and I'd recommend it) visit the Hiroshima Peace Memorial Museum and the bomb epicentre. From Hiroshima, take the tram out to the ferry and go to Miyajima, In Kyoto, make sure you walk through the bamboo forest-amazing temples in Kyoto (eg Kinkaku-ji and Ninna-ji) and you will be sure to see geishas and maikos around Gion Street. For an interesting experience in Kyoto, why not stay at a shukobo-accommodation attached to a temple. I can recommend Shunkoin temple www.shunkoin.com -you'll have to book in advance. In Nara visit Todai-ji temple-biggest wood structure in world-with big Cosmic Buddha. Look for the hole in the pillar-same size as the buddha's nostril-if you squeeze through, guaranteed enlightenment in next world. Kōfuku-ji temple and Hōryū-ji temple worth a visit too.

Japan is wonderful-you'll have a great time.

Debbie
Hi Lorraine, amazing answer! Makes me want to jet off to Japan! By the way, just a reminder about our geo-tagging feature -- it's helpful to be able to visualize where places are. Plus, people can click through to them for more information, making your answer more helpful! I've helped you geo-tag the places in your answer on a map. In the future, you can do this yourself as you answer a question by simply typing the @-symbol followed by the name of the place. Take a look at your map next to your answer :)

answered by
Stew from Toronto

I was recently in Japan (Tokyo, Kyoto, Nara, and Osaka) for two weeks with being in Tokyo for the most part.

I would definitely say the subway system (although maybe a bit overwhelming at first), is very efficient and will probably take you to where ever you want to go in Tokyo. For Tokyo, aside from visiting popular areas (Shibuya, Shinjuku, Harajuku, etc.) I visited Sensoji Temple in Asakusa area. I visited this place both during the day and evening and if you want to a better scenery and picture, I would suggest going at night as the temple and lanterns are all lit up then and a lot less tourist crowding around.

What I found most memorable with Tokyo was actually just visiting a random bar in Meguro and meeting random but very nice people. There was a language barrier but some of the younger people knew English and I had Google translate app with me too. Anyways, maybe I just got lucky but I hit it off with some people and they took me out for food, clubs and bars. Had a very memorable time with them!

There's so much to say but I guess I'd stick with the basics for now. Given that you want to do day trips and go to Kyoto, Osaka and Nara, I'd suggest you get the JR pass. It essentially let you ride the JR line for however long you've purchased the pass for. Very worth while!

Another thing I found to be very worthwhile to have was a mobile wifi. This is basically a small mobile device that will give you wifi access where ever you are in Japan. I found it nice to have to search up things while I'm out and more so for the translate app.

Anyways, don't want to bombard you with loads of info. Let me know if you want to know more and have a great trip!

Jillian
Hi Stew, great answer! Thank you for sharing! I wanted to let you know that we've helped you geo-tag the places that you mentioned in your answer so that they appear on a map next to it. You can also do this yourself in future answers by simply typing the @-symbol and then the name of the place as you're typing your answer. Check it out!

Re: Public transport in Kyoto: You would be moving around mainly via bus. They are accurate, almost to the minute, so plan wisely.

As for Osaka, if you are going to explore mainly Osaka City itself, it might be a good idea to get the Osaka Pass. It'll give you unlimited train and bus rides, and discounted or even free entrances into various places in Osaka.

Andrea, so excited to hear you are visiting Japan! Spring will be a lovely time to visit! If the cherry or plum blossoms are in bloom when you are there, definitely take some time to enjoy the natural beauty with a yummy bento lunch picnic in the park. ^_^

Regarding transport, I was curious if you purchased a Japan Rail pass for your trip? If you were planning on taking the bullet train from Tokyo to Osaka, I think the rail pass would be worth it, especially since you are making some of those day trips. You should be able to purchase the pass in your country.See details here: http://www.japanrailpass.net As far as the train goes, it should be no problem getting to and from those cities, as the transit system is really efficient.

I have only been to Tokyo a handful of times and am more familiar with western Japan, so here are some of my highlights:

Kyoto: You may consider spending more than a day here. There is so much to see and many of the attractions are located all over the city. Here are just a few of the highlights: 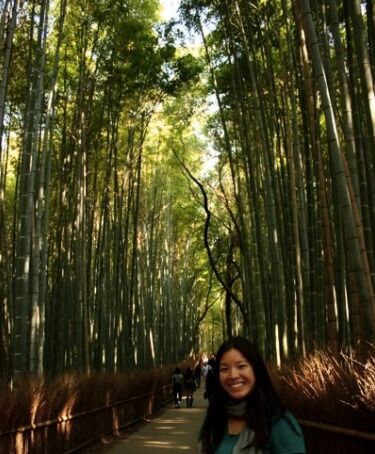 Nara: Nara makes a great day trip. Walk through Nara park, see the famous Nara "Shika" deer that roam freely around the park. I suggest hiding any paper goods that you do not want eaten by the deer. You can also purchase "shika-sembei", deer food (looks round crackers) for them. 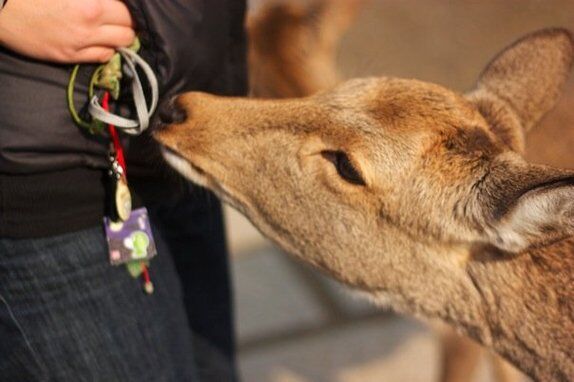 This deer wanted to check out my pocket for goodies.

When it comes to food, there is so much variety! Besides typical restaurants, here are some other food options to try while you're in Japan:

Have a wonderful trip!!

Andrea
Hi Cherie, thanks so much for your detailed answer, I just saved everything! You're pictures are amazing (the deer is SO CUTE!) and now I'm even more excited for this trip. To answer your question, I haven't purchased a Japain Rail Pass yet. The thing is I'm not sure is valid for the Tokyo-Osaka High Speed Bullet Train, I should probably check a JTB office in my city. Again, thank you for your answer, you really helped me a lot. Happy travels!

Cherie
Andrea, You're most welcome!! I LOVE Japan, so I'm always happy to chat about it. ^_^ Also, I see that Lorraine mentioned Miyajima. I highly recommend it if you have the time to make it to Hiroshima (shouldn't take too long via Shinkansen - bullet train). The Giant Tori-i in the water is simply amazing.

answered by
Anne from Hengelo

Kyoto is a great place to visit. A few tips:

1. staying at the Piece Hostel Kyoto; a great budget accommodation

3. Don't visit the theatre the Gion Corner; a tourist trap

4. eating at A la Chalamont; a great place for a romantic dinner (I realise it's French and relatively expensive, but it's worth it)

In general, when it comes to things to eat: Okonomyaki is the best.

Also, you should really consider to visit Hiroshima; a fascinating place. Compared to other places in Japan, Hiroshima is very lively. The Hiroshima Peace Memorial and park are very, very impressive. Anderson Kitchen (a Danish store) offers the best (European) breakfast and Sante is a great place to have drinks (please try the home-made Limoncello) and eat crazy food at night.