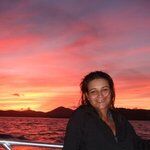 Best places to visit and stay in Japan?

We don’t have the specific places we are going to visit. We are celebrating our honeymoon there, so it’s a special trip, but at the same time we want to experience Japan and its culture at the most! So any suggestion will be great!

I'm from Nara Japan living in NYC.
Arrive  Tokyo then spend 1 or 2 night to see one of biggest city in Asia.
move to Kyoto by bullet train. it's around 3 to 4 hour $140USD.
enjoy traditional part of Japan in Kyoto and Nara.  most of traveler will visit these city.

Then, I'll recommend to visit Koya-san if you interested in really authentic part of Japan.  http://en.wikipedia.org/wiki/Mount_K%C5%8Dya

There are no hotel in this place but you can sleep over at temple called shukubo (Temple Lodging) that gives you unique experience. I think from Kyoto to Koya Mountain is around 2-3 hour trip by train.

Kyoto is too much with people, car and buildings. Koya mountain is quiet and sacred.

Alyra
Thank you!! That is exactly what we are looking for!!

If you want to experience the old Japan, go to Kyoto. There are many beautiful places to stay there, depending on when you go though, it may be really busy. If you are in Kyoto, you can always hop onto the train to go to Osaka which is the other extreme of Tokyo in terms of culture. It's lively like Tokyo and the second largest city but with completely different culture, people there are loud and out-spoken.

If you want to experience modern Japan, then go to Tokyo. You can hop on a train to Kamakura for a day trip to experience an old Japan or go to Asakusa to do the same. For manga sub-culture, you can go to Akihabara, for fashion, Ginza, Harajuku or Shibuya.

Tokyo is full of high-end hotels. Not sure if it's the right place for the honeymoon though.

Alyra
Definitely will go to Akihabara for manga! Thanks!

answered by
Luciana from Austin (Texas)

You didn't say how long you will be staying, but here's our itinerary from our first trip to Japan back in 2006 (we were there again last year but stayed mostly in Tokyo with the kids). We went in early April, at the Cherry Blossom time, which is one of the best times to go (another good time is during the Fall, in October).

We spent 7 days in  Tokyo, in a hotel in  Ginza, which was a good location. Other good locations are  Shibuya (where we stayed the second time) and  Shinjuku. We explored  Harajuku (go on a Sunday to see all the teens wearing their crazy cosplay outfits),  Omotesandō, the above neighborhoods, the  Imperial Palace gardens,  Akihabara,  Ueno Park,  Roppongi Hills , Asakusa (to see the  Sensoji Temple) for the first 3 days, then we took day trips to  Tokyo Disneyland (the next door Tokyo DisneySeais a more interesting park, which we visited this time around) and  Nikko. I would include  Hakone too, which is really nice and we got to visit on the second trip (it would be a good stop between Tokyo and Kyoto). The  Hakone Ropeway and the  The Hakone Open Air Museum are fantastic.

Then we went to  Kyoto, spent 3 days exploring the amazing temples, such as  Kiyomizu-dera Temple,  Kinkaku-ji, Daitoku-ji Temple,   Nijo Castle and watched the Geisha perform their Spring Dance at the  Gion Kaburenjo Theater (the dance only happens in April and October, it's the only time you can see the geishas performing other than paying over $1,000 for a private function). We took side trips to  Himeji to see the samurai castle, to  Nara to see the amazing temples ( Todai-ji and  Kasuga-taisha are the best) and to  INOUE to see the  Fushimi Inari Shrine (with hundreds of red torii - portals). We spent a total of 6 days in Kyoto.

After that we headed to the mountains to  Takayama to see the  Takayama Matsuri, which is an amazing spring festival, people come from all over Japan to see it (it happens again in October). The floats are elaborately carved in wood, lacquered and have a lot of details in gold leaf; during the day they are out on the streets so everybody can see them and at night they are lit by lanterns and carried around town in a procession with people playing music, it's quite the experience. From Takayama we took the bus up the mountains to a day trip to  Shirakawa-go Historic Village, the farthest point in the silk route. The houses are incredible, really tall with their long grass roofs, and the setting is beautiful as well, in the mountains next to a river. We spent 2 nights in Takayama.  After that we headed back to Tokyo to spend the last night before flying back home.

I would loved to have included  Koya-san, but we didn't have the time.

Alyra
Thank you so much!! This is a great answer!! We will be going for about 2 weeks, so this is perfect! We don't have a date yet, but we wanted to go in the cherry blossom time... Thanks again!

answered by
Ann from Melbourne

Kyoto and Nara a must. The temples and shrines are simply beautiful, and if you are an animal lover, in Nara, the deer roam the park and are accustomed to people so you can feed them.

answered by
Eric from Moscow

If you can swing it, take a flight to  Okinawa the "Hawaii" of Japan!

Annemarie
I second Okinawa. It used to be a military base, so there's this really interesting flux between resort town and military history there.