Is the Sultanahmet area worth seeing?

This will be a short trip on a small budget.

top answer by
Daniel from Melbourne

Absolutely. Sultanahmet is an area that holds so much history of Istanbul that it is arguably the first place/area to go to. You have the mosques, the basilisks, the mosaic museum. Far too much to mention.

answered by
Missy from Newport 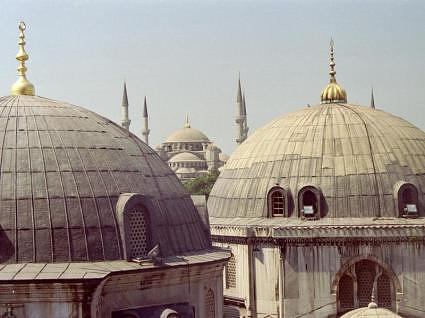 Hi, of the "sites" to see in Old City, Istanbul the Sultanhamet "Blue Mosque"  is very easy to include and is the same area as Hagia Sophia and the Roman Cistern.  However, depending on what is of interest to you, and how much time you do actually have, Topkapi Palace, Blue Mosque, Hagia Sophia, and the Roman Cistern are easy to see in 6 - 8 hours, with Topkapi Palace taking the most time, in my opinion, and a little further away from the other 3 highlights.  Again, only from the standpoint of really pinched for time, I think you should see Topkapi Palace, as a very interesting and important view of the Ottoman Empire culturally, and the inner life of the Ottoman Empire Royal Compound.  Next I would see the Hagia Sophia.  Much more, in my opinion, than that which the building has been through the centuries, I.e. a mosque, cathedral, and Greek Orthodox Church, is the Architectural Historical importance of the building.  Over 1400 years old, this building with the massive dome was an architectural and engineering wonder when built, and is a very important building worldwide in the world history of architecture.  After, I like the Roman Cisterns, a great example of the strong engineering abilities of the Roman Civilization, and also the adaptive re-use of the cisterns throughout the centuries.  Last, I would visit the Blue Mosque, which was built in the 17th century, is a beautiful well known landmark of Istanbul, well designed, and with fabulous tile work of Iznik design, as my 4th stop.  But again, all is so close, this is just splitting hairs, as if you have a day, you can see all 4 sites (as long as it is not Monday as museums are closed on Mondays in Turkey), during the day, and still have time to visit the Grand Bazaar and the Spice Bazaar both of which are open far into the night.  And I still really like Pandeli Restaurant up a number of stairs in the main entrance structure in the Spice Bazaar.

I agree with Daniel.  Not seeing the sites in Sultanahmet would be unfortunate.  It really only takes two days, or one very busy day to take it in.  I would recommend, Grand Bazaar, Basilica Cistern, Topkapi Palace, Blue Mosque Apart and Hagia Sophia.  Wonderful sites and history.  There is much more to Istanbul than this area, but it is a wonderful introduction to the city.