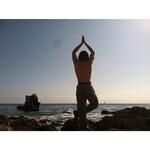 How to travel from Istanbul to Kathmandu without air travel

Any viable alternatives to air travel in getting from Istanbul to Kathmandu in late Sept/early Oct?

The land route goes through countries like Syria and Iraq. You could go through Armenia and Azerbaijan and take the ferry to Turkmenistan over the Caspian Sea, then onwards through either Afghanistan, northern Pakistan and Kashmir to Nepal, which obviously is a bit problematic, or you could go through Kyrgyzstan and China which is about the only route where the chances of being bombed or shot are little. It is very difficult to get your own car through there, and very expensive. This is probably about 10.000 km you're talking about and is going to take you many weeks.

There is a different option though, which is sailing from Istanbul through the Suez Canal and to India, and go the land route from there. I don't know if there are any passenger routes that way, but something can probably be figured out. That is relatively save (except for the Somalian pirates). The fun part of this route is that you could do the last leg as part of the Rickshaw Run, "a 3500 km pan-Indian race in a 7 horsepower glorified lawnmover", just for a little more adventure :)

There is one more option that comes to mind which actually be the most realistic one. This would be a ferry from Trabzon to Sochi in Russia, and then onwards to connect with the Trans-Siberian network in Russia, possibly in Kazan or via Ufa and Omsk. From Omsk you can get a train to Urumchi in China. There is also a new railway network connecting Nur-Sultan to China which might be a shorter route, but I'm not sure. I think it's so far only freight trains.

I don't know what the best way is to get from Urumqi to Lhasa in Tibet, but you might have to go all the way west to Lanzhou if doing it by train. The final step of the trip is then Lhasa to Kathmandu. This route also limits the number of visas you'll be needing, only Russian and Chinese additional to the Nepalese.

See, where there is will, there usually is a way. Somehow... This should be an adventure of 2-3 weeks, but probably well doable :)

If you do go by land, please share your travel story with us :)

answered by
Tony from Seattle

We had this exact problem on our round the world trip and, after some digging, threw up our hands and flew (via UAE & India).  I'll second the request: if you do overland, please come back to this question and tell us about it-- I'm sure you'll have some amazing stories.

I had researched this route myself and been to Turkey, Pakistan and India already.

Never been to Iran but consulted with many of my Persian-Canadian friends who had traveled around Iran.

Too bad direct train service between Istanbul and Tehran was discontinued a few years ago.

Istanbul take the domestic turkish scheduled bus service to Iran border. You can ask at the Istanbul Main bus station about schedule and prices.

Then take a series of public bus connections through Iran to Pakistan border.

It helps to know some Farsi language but I'm told its not too hard to find someone who speaks English to translate for you.

Then take a series of buses though Pakistan to India, both of which are English speaking countries.

Make your way to Lahore where you can take public bus to cross Pak to India at Wagah also where they have the famous sunset gate closing ceremony.

Easy taxi to Amritsar taxi drivers come looking for you as a foreigner.

Amritsar is famous for Gurudwara Blue Star Memorial and from there then take early morning train to Delhi.

India northern railways train from Delhi to Gorakhpur then short bus to Nepal border followed by bus to Kathmandu.

All these countries have stable governments and good domestic security including Iran and Pakistan which is NOT hostile to western tourists despite western media lies.

Your western ATM card will work everywhere except Iran where I'm told they prefer Euros not US dollars.

Never discuss religion or politics, dress down, mind your own business and keep a low profile.

Debbie
Wow, this is incredibly insightful, Anthony! Thank you so much for sharing!

answered by
Marco from Bergamo

A friend of mine (girl) made it hitch-hiking with a friend (male) all the way from Sofia to Tehran - this was in 2012. There were a few bits along the trip where she didn't feel entirely safe, but she said they didn't face any huge problem and she loved the experience a lot.