Where to go to avoid tourists and see the real Hawaii

I am looking to travel to Hawaii for the first time ever, with my best friends. None of us like to be around big crowds or do the usual touristy stuff. We like to go to hole in the wall places, they usually have the best food, and we want to see the real Hawaii go where the locals go. Any suggestions would be greatly appreciated!!

answered by
Edward from Stockholm

I spent 2 weeks in Hawaii in October 2015 and would say that out of the three islands I visited, Kaua'i was the one that really stood out: fewer people, lots of quiet areas, small towns, and amazing nature. Of course, you will meet tourists at some points, especially when doing popular things such as walking along the water in Na'Pali Coast State Park - but don't let that scare you away from this marvelous experience. On the way back: stop at Pink's Creamery for ice cream and super tasty grilled cheese sandwiches with pineapple. (This joint is in the outskirts of super touristy Hanalei, but few people seem their way to find this place. Instead, the crowds gather in central Hanalei.)

We found several serene places and small food joints on the other two islands as well: Maui and O'ahu. On O'ahu there are lots of tourists in central Honolulu so you might wanna avoid that. Hanauma Bay Nature Preserve is also very popular (but a real treat if you like snorkling) as well as North Shore. Overall, nature experiences seemed less popular that food and shopping so if you like that I would suggest places such as Koko Crater Botanical Garden or hiking. Also, very few people on the beaches on the east side of O'ahu, such as gorgeous Waimanalo Beach Park.

And of course: you must rent a car but I guess you will be doing that? :)

Have a great trip, Hawaii is the most amazing place I've ever been! 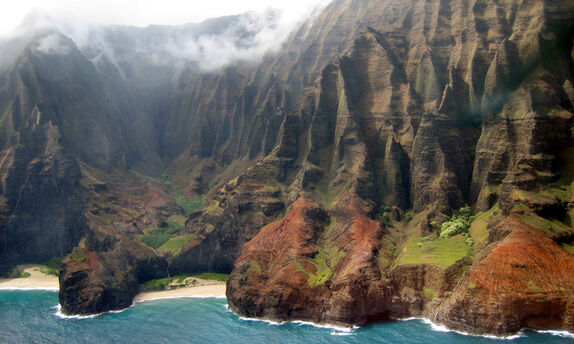 answered by
Michael from Honolulu

Let me ask what do you mean by big crowds? Honestly most places that you might want to go will be crowded but there are things you can do so it's not so bad. Such as:

- Helena's Hawaiian Food, do NOT go on Tuesday. Since they are closed Saturday to Monday it's packed when they reopen. Go early before they open and just chill in your car before they open this is because there is limited parking stalls. Same thing for Ethel's Grill

- Beaches, avoid Lanikai Beachon holidays (they make parking illegal on some streets illegal then and they do tag and/or tow). The best times are weekdays when the locals are at work. PLEASE DO NOT leave valuables in your car even for couple of minutes especially at the beach, hiking or shopping.

Michael
Oops do you mean Hawaii as in the Big Island or Oahu?

The Island of Molokaiis not developed and you will feel like you went back in time to what Hawaii used to be 50 years ago.  They don't even have a stop light!  No big high rises, not even big resorts!  People are very laid back and friendly on the island.   If you find it too slow and laid back you might consider going to Hawaii Island, also known as the The Big Island and stay in Hilo.  Although it's the only city on the island it isn't touristy at all and yes there are tons of "hole in the wall" places to eat where the locals love to go and eat amazing foods.  Depending the time of the year, it sometimes gets some moisture but that is what creates the lush greenery forests, waterfalls and rainbows.  Plus it's close to the Hawaii Hawaiʻi Volcanoes National Park, although it does attract many tourists.  Hilo does not have the beaches but if you are looking for adventure this is an excellent choice. Need help and recommendations on where to stay let me know and I can help you with recommendations and suggestions.