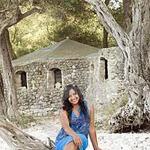 At this point, I've hit most of the major cities and villages of France (namely Paris, Toulouse, Nantes, and Lyon), so next summer, I want to rent a car and see the hidden, less popular ones and I would love some names to use as starting points. Nothing is too small--in fact, the smaller, the better. And the more rural, the better--I want to see a France most people never discover. Thank you!

Shireen, my favorites are:

Saint-Remy-de-Provence and  Bonnieux (scenes from movie "A Good Year" with Russell Crowe).  Les Baux-de-Provence is beautiful little village, I am sure you will love it. Check  Mont Ventoux - one of the most beautiful mountain where one of the biggest natural mineral water sources is. There is one of the most romantic little towns called  Fontaine-de-Vaucluse. Arles is also a must-see. and also little village Paradou. Château d'Estoublon is a beautiful estate with olive grove, wine, but I think they make the most amazing fig confiture ever! (Château d'Estoublon - Route de Maussane - 13990 Fontvieille)

it is hard to find something not touristy there but  Saint-Paul-de-Vence is so beautiful.Definitely check Marco in Menton (Descente du Petit Port, 06500 Menton) - hard to find gem with heavenly food, located in old port right on pier. In  Cap d'Ail visit restaurant  Le Cabanon (Pointe des Douaniers 06320 Cap d'Ail) - a place for locals with simple and delicious food.

PS If you are flexible with dates and want to see Lavender fields in color (and know when to go ;) ) - check valleys from Valréas to Vaison-la-Romaine

Shireen
Absolutely amazing Victoria! I've actually not spent much time in the south of France, so that's definitely on my list, as well as the very northern parts. Very excited to visit these places! Thank you!

Julianne
Thank you for this!!

answered by
Darren from Dublin

You've obviously seen a lot of France at this point but want to get to know the real France.

You could stay in some of the more well-known regions such as Normandy and visit some of the lovely villages of the little known Perche such as  Belleme and  Mortagne-au-Perche. The area is a sleepy land of laneways and the iconic Percheron horse yet is only two hours west of Paris and a short drive to the Normandy coast.

Heading further west you could look to the really little known departement of La Mayenne. This is an area that I spend a lot of time in, floating between Normandy, Brittany and Anjou.

Sainte-Suzanne was recently voted among France's favourite towns and is officially a plus beau village. Home to a hilltop fortress it has a lovely feel to it sitting high above the plains. Mayenne is dominated by rural farmland and officially lies in the Pays de la Loire, the River Mayenne drains into the Loire near Angers. Half an hour from Saint-Suzanne is  Jublains, an old roman town with amphitheatre, baths underneath the church and a small but very good museum.

There are lots of other places that you could visit, I like this area a lot and I have read it somewhere that La Mayenne is the least populated lowland departement in France, cattle farming and cheese production dominate here and although it now doesn't produce cheese the abbay of Port du Salut is the home of one of France's best cheeses.

Mayenne and  Laval are the chief cities in Mayenne. And for rurality you can't beat it, almost all Parisians that I have spoken to have never heard of Mayenne, even though the TGV from Paris to Rennes and beyond stops in  Laval.

Hope this helps and if you have any questions about the area please ask.

Debbie
These sound amazing, Darren! Like Shireen, I've mostly only been to major French cities too, so I can't wait to visit these!

Shireen
These sound so lovely! I haven't spent very much time in the very north part of France, so this could be nice. Thank you kindly for your recommendations Darren!

answered by
Maelle from Rennes, France

In France I would definitely go to britanny to visit Saint-Malo and Dinard for the best sea side views ever!

answered by
Seán from Berkeley

We drove in the south of France in 2006 and enjoyed it immensely!  Apparently it is a big deal to obtain and keep a driver's license in France, so everyone drives consistently and obeys the law well!  I found it easy to figure out what to do in various situations just by following what other drivers were doing (not like my home in the US, where you NEVER know what drivers might do!!).

Uzes is a charming village in the Languedoc-Roussillon region.  I am told it is considered one of the prettiest villages in France.  It has a variety of different marché (outdoor markets) through the week, each on their own day.  We found an apartment in the old part of town and stayed a week (and we're considering going back, we enjoyed it so much).

Les Baux-de-Provence was already mentioned by someone else - ruins of a medieval fortress with a tiny, interesting village at its base.  Don't go during the summer peak - its tends to be swamped with tourists and kitschy trinket sellers.  But do visit the nearby Les Carrières de Lumières which is adjacent to the village.  This is an old limestone cave quarry that has been turned into a visual performance space - color images being projected on all the flat white surfaces accompanied by music.  Truly a unique experience and not to be missed!!

Over in Provence, an unusual stop might be L'Isle-sur-la-Sorgue, an old mill village that is famous among antiques dealers.  Its various marché d'antiquités are considered second only to Paris.  A bit upscale because of this, but a charming and unique place.  it is surrounded by tributaries of La Sorgue river, whose source is the giant spring at the nearby Fontaine-de-Vaucluse, which runs year 'round (though more dramatically during winter/spring) and is considered to have health and/or spiritual properties.  The relatively equal year 'round temperatures of the waters have a moderating influence on the region (warmer in winter, cooler in summer).

Debbie
All of these places sound so lovely!

Shireen
Amazing recommendations, Sean! Thank you so much. These are fantastic ideas!

answered by
Magdaléna from Netherlands

If you're planning to go there in summer, I'd love to direct you to the  Les Salins de Giraud  Parc Naturel Régional de Camargue... the path to the coast with piles of drying salt, horses and wild flamingos is just breathtaking :)! Of course, Arles is very close - one of the cutest cities in France, mixing Franch and Spanish atmosphere...

Shireen
Flamingos in France? Wow! These sound fantastic. Thank you so much Magdalena!

answered by
Coralie from Selestat

I suggest you to come in my town of Selestat Region Haut-Koenigsbourg.

You can visit small traditional towns and lots of wineries, walk in wineyards, rent bikes to discover the Region.

You can have a look on this Region on my site:

Avignon is quite nice.