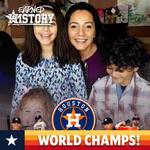 Driving from Houston to Denver with a 8 and 11 yr old.

I'd like to stop at some interesting places on the way to make sure the kids are somewhat entertained and we've never done this before so we'd like to make an adventure of it. Any suggestions will be greatly appreciated.

Fort Worth definitely.  The Cattle Drive is in the Fort Worth Stockyards and would be fun for the kids, as well as checking out the abundant Western shops,  Downtown Fort Worth is a straight shot down North Main from the Stockyards, and features Sundance Square which has lots of eateries and a big jet fountain in the Plaza that kids play in.

Strongly suggest the Fort Worth Zoo; it is among the top 5 zoos in the nation and is not far from downtown. Motels nearby.  (If you are going the week prior to Memorial Day, the Colonial Invitational Golf Tournament will be going on and the Colonial Country Club is across University Drive from the Zoo. Bad Traffic) Also nearby are the Kimbell Art Museum, Modern Art Museum of Fort Worth, Amon Carter Museum of American Art, National Cowgirl Museum and Hall of Fame, and Fort Worth Museum of Science and History all within walking distance of one another.

South of Fort Worth near Granburyyou will find Dinosaur Valley State Park where your kids can play in the river and see actual dinosaur footprints in the river bed.  Across the road is Fossil Rim Wildlife Center which is a wild animal drive through park.  There are lots of herd type animals including giraffes and zebras, plus a breeding cheetah colony (fenced in thoroughly). It is a lovely day trip only 1 hour from FW. Downtown Grandbury has a beautiful square full of shops and eateries.

If you are coming up from Houston, you will pick up Highway 287 south of Dallas.  it angles to the North West to Interstate 20 which will take you into Fort Worth.

Depending on your route to Denver, you may be able to visit Great Sand Dunes National Park and Preserve, which is a whole lot of fun.

There is a steam rail on the NM-CO border Antonito which runs to Chama.  There are half and full day trips.  It is a blast!  You go one way on the train and they bus you back.

Michael
Thank you Clair. It sounds like Ft Worth could be a couple of days of fun things to do.

I suggest someplace around Fort Worth as the first stop - there is the cattle drive, and there's a train which I think goes to Grapevine.  Also nearby in Denton there's a museum in the City Hall and an old fashioned ice cream parlor.  Then I suggest going up to Mesa Verde National Park and then the Great Sand Dunes National Park and Preserve and visit the Garden Of The Gods before you go to Denver

Michael
Thank you again Rosalie. You are a treasure.