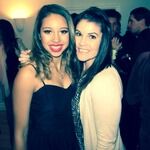 Best place for dinner near the convention center?

Spending 4 days in Dallas with my 15 year old daughter for a cheer competition. We would love to find some hole in the wall places to eat near the convention center, preferably BBQ.

Hey Ali! I think you guys would dig this place called  Cafe Brazil. It's the kind of place you can coffee/breakfast at all hours. It's open really late, might be 24 hours. It's a little... hmmm... quirky i guess. It's low key and you could role in there wearing sweats if you wanted some easy for a group. There is one close to you in the part of town called Deep Ellum, which is kind of the artsy/music area of Dallas. It's a little gritty too. There is a BBQ near there as well called  Pecan Lodge which i've heard good things about too, but I personally haven't been yet.

You can follow Brew's tip and go check out  Peggy Sue BBQ which is a short drive, but that's where I spent a lot time while at SMU. You could check out the campus too (not a bad idea with a bunch of 15 yr olds :)) Just behind Peggy Sue is little shopping area called  Snider Plaza. If you're up there you'll be in one of the nicer neighborhoods in Dallas.

Alison
Thanks J.R.! We have almost all day Monday open so I am hoping to take Jamsine to see a couple campuses. Thanks for the great tips!

Its no super close, (about 10 or 15 minute drive), but I love Peggy Sue BBQ, which is right next to the SMU campus (a cool place to explore).  Brisket sandwiches (chopped or sliced are fantastic).

answered by
zeke from Marfa

Off the radar? try:

"Off The Bone Barbeque"

answered by
Aaron from Texas