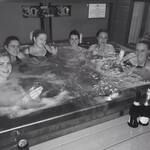 Winter Sun? Where to go??

Hi there,  I want to book a holiday for a week somewhere Warm where we can enjoy the pool and relax? We love cyprus but have read mixed things about December? i want to go the 27th Dec so the end of the month? Please help me!

answered by
Elizabeth from Larnaca

You should be visiting Cyprus April-October. Its cold and boring during winter (inside the house also!).

It is, of course, impossible for anyone to tell you with any certainty what the weather will be like for your visit.

I've visited Cyprus (based in Paphos) twice in late December.

I'm from the UK and found daytime temps (high teens & sometimes low twenties) warm enough for a t-shirt, though early mornings and evenings were (obviously) cooler. Most days were sunny though there were also cloudy periods and occasional rain.  Obviously, as one went up into the Troodos Mountains, temperatures were a bit lower and in the highest parts there was snow.

I was able to sunbathe in sheltered spots but personally wouldn't have fancied swimming in an unheated pool or the sea...a bit too chilly for me!

Absolutely nowhere around the Med has guaranteed warm & sunny weather in late December but I think Cyprus would be a good bet.