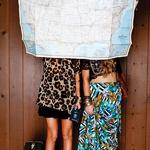 Hip Hotels in Carmel or Monterey?

We consist of 2 couples, and will be driving from Big Sur with our final destination being San Francisco. We plan to spend the night in Carmel or Monterey? We prefer a location where we can walk to restaurants. We only have 1 night here before continuing onto San Francisco. Any recommendations for hotels and their nearby restaurants?

Carmel and Monterey are wonderful places to stay. I was super lucky to live in the area for two years, and recommend you check out the following:

Pacific Grove is also a very cute town on the peninsula, and just beautiful with famous pink ice plant covering the land near the sea in the Spring: 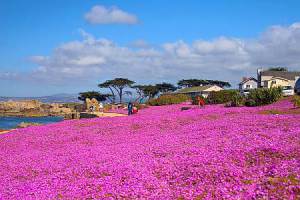 Highly recommend walking along the water if you have time and it's sunny out. :)

Hi! I lived in Monterey for four years and worked for the tourism board, so I know the area like the back of my hand. I should warn you at the outset that if you're looking for the kind of "hip" that involves cool indie bands and outrageous fashion, that's not what you'll find here. It's a much more mellow vibe.

Note that many hotels require a two-night stay during peak periods and there are times of the year when the town sells out well in advance. I strongly recommend booking ahead.

Be warned that it will be cooler than you expect. The local joke was that in July and August there were hotels that made more money selling sweatshirts than renting rooms...and their rooms weren't cheap. The summer is generally the coldest part of the year for the area, sometimes dropping down into the 50s during the day.

If you want something walkable and will have some time to spend (rather than just eat-sleep-depart), I agree that Carmel is a good choice. It is hipper than it used to be, but it's not exactly urban-funky; it really feels like you're in a town that came right out of a fairy tale. In addition to great restaurants within walking distance, Carmel has many wine tasting rooms (personal favorites are Scheid Vineyards and Caraccioli Cellars - Caraccioli is known for their sparkling wine) and a really cool vibe. It is permitted to take wine and a picnic down to the Carmel Beach City Park at the end of Ocean Avenue; watching the sun set down there is pretty much an evening town event.

Folks have named some nice hotels, but I'm going to add a couple more at a variety of price points: Tradewinds Carmel Hotel has a cool Asian vibe and is quiet but close to the action. The Forest Lodge is in the middle of everything and has some cottages that hold up to 4 people.

When we go back we always make it a point to eat at La Bicyclette, (we have honestly gone there for dinner and then right back the next morning for breakfast) - it's got a country French vibe and does good French and German food. Vesuvio Restaurant serves great Italian food and has a fun rooftop bar. Dametra Cafe is, from all reports, great, but it was always too packed for me to get in...which is a very positive sign!

If you're literally just driving in, dining, sleeping and leaving, then it might make more sense to stay in Monterey. Restaurant 1833 has received national acclaim; it won a James Beard award in 2012. They're known for their tableside bar cart service. It is in a historic house (hence the name). There's several hotels within a short walk, including the Monterey Marriott, the Portola Plaza (known for its very comfortable beds) and the Merritt House Inn if you want to go full-on historic.

If you do stay in Monterey, you absolutely must go to the The Crown & Anchor for deep-fried artichoke hearts. They are a local specialty (it's artichoke country up there) and boy, do I miss them terribly. For breakfast, don't miss Parker-Lusseau Pastries, which has some of the best pain au chocolat I've ever put in my mouth.

And if you decide you're in the mood for pizza or just want to eat cheap, Pizza My Heart has literally the best pizza I've ever eaten in my life. It is so good that whenever we go to Monterey we eat there, buy an extra pizza, pack it up, and bring it back, because cold Pizza My Heart out of the fridge is still better than any other pizza. It is in a mall and it's not nearly as high end as any of the other places I've listed but seriously, it's amazing. We have been searching for anyplace that measures up for three years now and no such luck.

I would rate Carmel a better place to stay than Monterey.  The last time we were in the area, we stayed at the Seven Gables Inn.  It's pricey, but the views are outstanding.  It's a great place for relaxing.  Take a drive around at least part of the 17 Mile Dr before you head for San Francisco.

I agree with Krista about Passionfish.  We thought it was terrific.  It's about a ten minute walk from the Seven Gables Inn.

John
I wasn't implying that the Seven Gables Inn is in Carmel. When I re-read it, it sounded like I was.