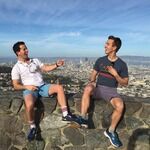 I am from the USA looking to live in Buenos Aires for a couple of months. Any suggestions for neighborhoods to check out? I am looking to live with 2 to 3 other locals with a rent of $400-500 USD/month.

Somewhere with great coffee shops, parks, and nightlife are ideal.

Kevin
Thank you! I am staying in an Airbnb in Palermo, and love it. Highly recommend! Especially, for those who enjoy cafes and nightlife. If someone wants something quieter, I would message the host first/read reviews to see how loud the street is. I have 5 bars on my little block, and the Argentinians love to stay up late :)

Palermo. I lived there for 6 months and paid about $500USD/month for my place and it was absolutely beautiful. Best place for great restaurants, nightlife, easy access to transportation, and everything else you could ask for in BSAS. I loved it there and highly recommend it.

Hi Kevin, Palermo fulfills all your requirements. Is central but residential, has the best parks of the city, nice coffee shops and restaurants, trendy bars and the best nightlife. It's a big neibourghood so I advice you to be near Santa Fe Ave. where the metro is, and the area known as Palermo Soho.

Unfortunately is more expensive than other neighbourghoods but it's worth it.

You can also look in Recoleta or Belgrano which are also very good, and the areas between those three.

Jordan
I second this, Palermo Soho is a great neighborhood! There's always a lot to do, interesting shops, nice parks and access to some of the sights of the city, great restaurants and cafés. Like Laura said, it's certainly not the cheapest area in Buenos Aires, but you should be able to track down an apartment that meets your needs! Another thing to keep in mind in BsAs is safety, and as long as you keep your wits about you, this area is relatively safe in comparison to some other parts of the city. There's a Metro stop right near Plaza Italia if that's a concern of yours. (And an insane number of buses run along Santa Fe)

Palermo is a great place! Nightlife, shops, and Los Lagos De Palermo S.A.  is the biggest park in buenos aires.

answered by
Teresa from Chicago, Illinois

I will agree on Palermo but I sincerely love the charm of San Telmo, it's closer to downtown and the area of Puerto Madero on weekends is busy with the antique market and calm and charming on weekdays. It might also be a bit more affordable that Palermo or Recoleta.