Where is the best place to go camping in August/September in the Bay Area?

West Point Inn in on Mt Tam is great ..... there is also camping on Angel Island in the middle of the bay:

In the middle of San Francisco Bay sits Angel Island State Park, offering spectacular views of the San Francisco skyline, the Marin Headlands and Mount Tamalpais. The island is also alive with history. Three thousand years ago the island was a fishing and hunting site for Coastal Miwok Indians. It was later a haven for Spanish explorer Juan de Ayala, a cattle ranch, and a U.S. Army post. From 1910 to 1940, the island processed thousands of immigrants. During World War II, Japanese and German POWs were held on the island, which was also used as a jumping-off point for American soldiers returning from the Pacific. In the '50s and '60s, the island was home to a Nike missile base. Today, there are two active Coast Guard stations - at Point Blunt and Point Stuart - on the island. Angel Island became a State Park in 1958.

If you are psyched for a little hike, the Point Reyes National Seashore has a few to select from.

A little inland from the coast, there is Samuel P Taylor State Park.

If you head up to the Russian River in Sonoma County, there a good number of campgrounds with river access.

I recommend Kirby Cove campground. It offers a stunning view of the Bay Area and has a ton of great hikes. 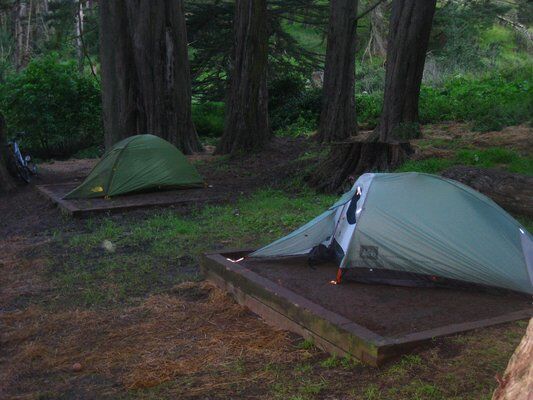 Another place you should check out is Rob Hill Campground. It's great for big groups! 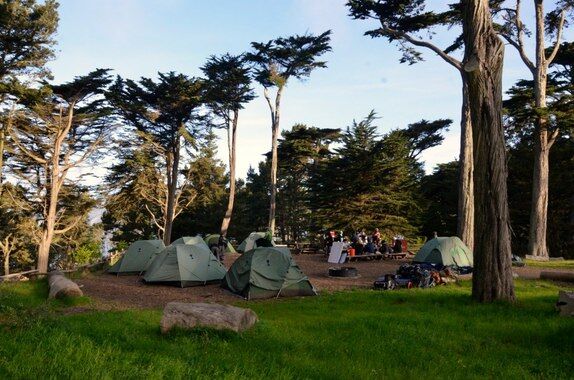 I would call and check availability because I know these places book fast!

answered by
Michele from Southern California