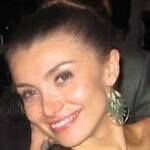 Some general questions and insights on Barcelona

I need some short interesting insights:

-How would you describe La Rambla?

-What's not to miss in La Boqueria?

-What to do in narrow streets of Gotico?

La Rambla is a tourist trap. Just walk to la boqueria and make a fast right hand turn to Pinochet. Have the garbanzo beans and Octopus.

Basílica de la Sagrada Família is awe inspiring. Agree you should get your ticket through ticket master ahead of time and do the audio tour. Go to Parc Güell (Gaudi's planned living park), and hit La Pedrera or Casa Batlló (Gaudi designed homes).

Head over to El Born; Barcelona's hipster neighborhood. There is a great bakery; Bubó.

I also hughly reccomend Barri Gòtic for tapas and vermut. Just spend an evening wandering or do an organized tour.

answered first by
Jahn from Barcelona

Once upon a time it has been a street with a lot of unique charm. Restaurants and little shops where found all along it. Nowadays most of it is occupied by international chains and kebap stores. Well, some nice exceptions are still in place, like Café de l'Òpera. If you go anywhere on the ramblas, that maybe my best bet.

But if you venture into the streets surrounding it, you will still find those little stores and the unique feeling of Barceloning.

This church by Antoni Gaudi is an amazing piece of architecture. If you like amazing buildings and details, this is one of the expressions of Gaudis spirit + an interpretation of that by the following architects. I love the special light inside (you should order a ticket online in advance in order not to queue for hours). If you don't want to pay, at least admire the nativity facade. It is full of details... 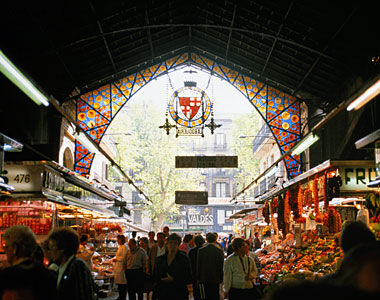 Pinotxo - web - He is a true original and the best experience in that whole market! You may have to queue for a seat, but for a reason.

Hope you are having a good time in Barcelona!

If you have any more questions... get it on!

1. La Rambla is very crowded and touristy. It's fun for a quick walk just to say you've been there and to get somewhere else. This is where you'll see the majority of street artists in the city and there are some good ones, but it's not a place to spend a lot of time. Walk down it, then move on. At the end you'll find yourself at the water, an old fishing village area, and the statue of Christopher Columbus. 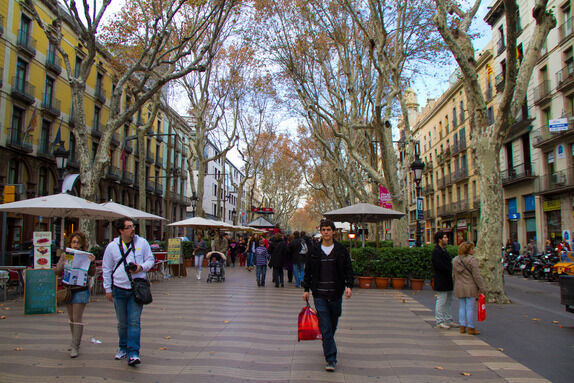 2. The Sagrada Família is absolutely stunning inside and out. I was in Barcelona in December and did not get my tickets in advance, but I did get in line 40 minutes before they opened and was able to get in quickly two days in a row. Yes, I loved it enough to go back because I missed a couple towers on the first time. Do go inside and do go up inside the towers. It's so beautiful and you can see views of the entire city plus you'll see many of the art, mosaics, and carvings up close. One elevator will give you access to towers on one side and a separate elevator will give you access to the opposite towers. The passes are timed, so if you want to do both elevators, you'll need to ask and get separate passes.

The amazing thing about the Sagrada, apart from the Gaudi design, is that Gaudi wasn't able to finish it and it is still under construction, so you're able to see a true architectural wonder during its construction.

3. I just love to wander the Barrio Gótico de Barcelona. The streets are narrow, the architecture is interesting, there are a lot of little surprises here and there. It's a nice place to just walk, absorb the atmosphere, and explore shops.

Debbie
I didn't recognize you with your awesome new photo! Great insight on Barcelona :)

Tiffany
Thank you, Debbie. I usually prefer the photos with my camera blocking my face, but my daughter took this of me, so I figured, why not!

answered by
Jessica from Washington, DC

La Rambla in my opinion is crowded and touristy, head to El Born for nice shops and restaurants eat at Mercat de Santa Caterina, went on a local tip, it was great! Districte de l'Eixample is where we stayed on our last trip at Market Hotel, a great residential neighborhood. We loved the fresh fruit juices at La Boqueria.

answered by
Jack from Atlanta

La Rambla - is filled with exciting bars and shops. However it is also infested with tourist traps. It's definitely worth checkin out but you might want to refrain from spending too much money in that area.

Basílica de la Sagrada Família - impressive, beautiful, something not of this world

La Boqueria - filled with fresh produces and fruits. The food there is great. Highly recommended it.

answered by
James from Barcelona

Basílica de la Sagrada Família is historic and may not be completed in our life time. I've never been inside as the queues look huge whenever I'm by there, but I've heard it's amazing inside, especially if you're in to stained glass windows. Impressive from the outside though.

La Boqueria - if you're passing through, then a smoothie from one of the stalls, if you're cooking for yourself, just pick a meal and buy your ingredients there and it's guaranteed to be amazing (and cheap).

In the Gothic Quarter there's the famous Bridge of Sighs (you'd miss it if there weren't a constant gaggle of people taking a photo of it at any given time), the cathedral, more shops and a market some days. It's a lovely area to walk and get lost around.

answered by
Stephanie from Caracas, Venezuela

La Rambla is a MUST in Barcelona. The most important thing you need to know about it is that La Rambla is the pickpocketer's favorite place to work so be careful with your bags and pockets... other than that it's a great place to walk around, look at the multiple shops, look at the people and visit La Boqueria!

EVERYHTING is interesting about Basílica de la Sagrada Família! It's the most unique church in the world (in my opinion) because it has so many little fun facts about it's history! I would recommend taking a guided tour if you go because there are just so many little things that the tour guides can teach you! It's all-in-all a beautiful monument!

In La Boqueria you should definitely try some fresh seafood and some patatas bravas.

And in the Barri Gòtic its just about getting lost in the streets and being very observant of the details in the architecture. There are also many little shops with unique products that are worth looking at.

answered by
Lindsay from Moreno Valley

I would say La Rambla is a bit touristy, full of souvenir stands and the like. It's interesting for people watching. It's expensive, so I don't recommend eating there - instead, veer off to one of the side streets.

Basílica de la Sagrada Família is interesting because of the architecture (I think it looks like a giant drip sand castle XD). The designer, Gaudi, is a very important person to the people of Barcelona and you can see several of the other buildings that he designed there, as well as Parc Güell, which features mosaics, sculptures, and more architecture. Back to the Sagrada Familia - the cathedral still isn't done being constructed, even though it's been in the process for more than 100 years.

La Boqueria is one of my favorite places in Barcelona. While we were there, my family stopped in a couple times just to grab sandwiches for the day and wander around. There's tons of beautiful food on display and for purchase. Really, the market isn't overwhelmingly big (you can walk through it in less than an hour, maybe closer to thirty minutes if you move a little quicker than we did the first time), so I wouldn't be too worried about missing anything. There is the possiblity of being sad that you can't eat everything there ;P Also, it's off Las Ramblas, so it's a good place to visit when you decide to do that.

Finally, for the Gothic Quarter, I really recommend the Sandemans New Barcelona free walking tour that is done there (http://www.newbarcelona-tours.com/daily-tours/free-tour-of-barcelona.html). We learned so much and had a fantastic guide.

answered by
David from Brooklyn

La Rambla: Touristy and crowded. One stroll down it is enough

Basílica de la Sagrada Família: Touristy and crowded but actually worth it. Go early, go inside, and go to the top. Insane architecture and killer views of the city

La Boqueria: Just wander around and buy whatever looks delicious!

Barri Gòtic: Also best for a wander. Plaza Real and Plaza George Orwell are both highlights.

Here's my own, very personal opinion:

1. Las Ramblas is a tourist trap the nearer you get to the water, but taking side streets can lead to great restaurants and bars. I particularly enjoyed Ballakano.

2. The most interesting thing about Basílica de la Sagrada Família is why people are willing to wait so long in line. Apparently you can purchase skip-the-line tickets well in advance.

4. In Barrio Gótico de Barcelona, the best thing to do is wander! The streets are full of life during the dining hours, and while not so tourist friendly as the night wears on, still an interesting experience. There are lots of cool bars.

answered by
Alí from Barcelona

La Rambla is a great spot for the discovery how big is our world, step by step you can see a lot of people from all the world, colors, languages and styles

answered by
Lara from Santander, Cantabria

All of these places are important to visit. Basílica de la Sagrada Família is spectacular, buy the tickets online then you won´t wait the queue.

There is a free walking tour in Barcelona called Runner Bean Tours (Free Walking Tours meeting point) that was extremely well done.  You tip what you feel it was worth.  It is mostly in the Barri Gòtic.  Enjoy!

Tara
What I love about the people of Barcelona is their willingness to give tourists local perspectives. This site EatWith lets you pay to go to people's homes to have authentic food and get local tips/insights from people who actually live in Barcelona. Similar to Airbnb, for food. www. eatwith.com