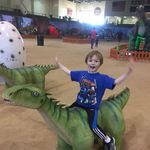 I think you mean Ayr (Scotland) rather than 'Ayre'?

Dalry is now a (very) small town rather than just a village:

I can find no mention of a village of that name although the pit was called Dalqueharran pit and it seems that estate owners built houses for the workers. The village near the castle is called Dailly.

Knockshoggle is a known deserted village site (but don't expect lots of empty houses: it doesn't work like that in the United Kingdom!):

There's a video here showing Knockshoggle site but, in common with almost all UK deserted villages, it's now just 'lumps and bumps' in a field.

I can find no trace of  Johnstown but have seen suggestions that it was a small village just outside Dalry. If that is the case then it is very possible that, as it grew, Dalry simply absorbed Johnstown...or it is now just another deserted village site: a lumpy, bumpy field. Don't be misled by the use of the word 'village'. In the past, a 'village' could just be a couple of rows of small cottages...or even just one row.

You might contact the official Ayrshire archives to see if there is more information about these village. The contact link is top left of this page: