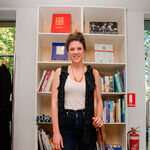 What makes Austin so weird & what are the quirky things I should check out?

I always see the signs "Keep Austin Weird", just wondering what makes it a weird city and what are cool, quirky things I can do on my trip there in the summer?

answered by
Daniel from Austin (Texas)

Hey there, Gina. During the summer months, finding a swimming hole is definitely a good idea. You have Barton Springs Pool and Deep Eddy Poolin town and Hamilton Pool and Krause Springs within a 30-45 minute drive of town. You can also rent kayaks, SUPs, and canoes on Lady Bird Lake. After rains, the swimming holes in the Barton Creek Greenbelt are a great way to spend a few hours (you walk/hike a few miles to reach them). On Sunday afternoons, Ginny's Little Longhorn Saloon is a great place to hang. Movies at Alamo Drafthouse Cinema are a fun experience. My favorite music clubs are Continental Club, Mohawk, Stubbs BBQ, Cheer Up Charlies, ACL LIVE and Broken Spoke. There is a great restaurant/bar scene on E. 6th which includes Licha's Cantina and Eastside Showroom. Nowadays younger visitors seem to flock to Rainey Street and downtown party areas, and these are fine, but just a small slice of the city. Strolling around the UT campus is also fun. Have a great trip.

answered by
Cherokee from Jupiter, Florida

The bats!!! Check it out: BatCon.org

Also, check out all the amazing things they have to offer that are uniquely Austin here: www.downtownaustin.com/experience

answered first by
Keith from Amsterdam

The "Keep Austin Weird" slogan was originally started as a campaign to promote small businesses I think. It's a reference to the hippy-like cultural elements of Austin. But it does capture the mood of many places in the South-Central part of the city. There are restaurants like Amy's Ice Creams, Kerbey Lane Café, Maria's Taco Xpress and Casino El Camino that are good examples. The staff and decor of these places are eclectic and different.

There are also exhibits like Cathedral of Junk and Planet K South Gift shop. Even more "weird" are events like Eeyore's Birthday Party and entertainment acts like Esther's Follies. But probably the most noted symbol was Leslie. He was the self-proclaimed homeless mayor of Austin. It was not uncommon to see him pushing his shopping cart while donning high heels and a thong.

These are just a few examples that lend to the "Keep Austin Weird" vibe. If you like the unique, quirky or hippy-like then you might enjoy South Austin.