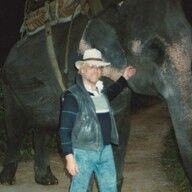 I was born and raised in Reykjavik, Iceland, but left at an early age and joined the Entertainment Staff on the Chandris Lines cruise ships for a few years. The Staff was a kind of ensamble cast of various entertainers, - singers, dancers, specialty acts and comics. I was the resident comedian and sometime M.C. Then spend decades as a Tour Manager for several five star tour operators, which further expanded my travels. I was one of the first to bring tourists into the then USSR, and to Russia, and I was also first (or close to it) bringing tourists into China after Nixon opened the gates. Finally, getting married did not stop the madness, - until I had my beautiful daughter, - and wanting to be there for her growing up, I spent some time creating expensive FITs (Foreign Independent Traveler), and only doing occasional tours that I created. Unfortunately there was not much money in it, at the time, (the money was all on the road...), and I was forced to seek other work. Got involved in California Workers Comp law, which I did on a contract basis. Fortunately, I still had a lot of contacts in the industry, which enabled me to do occasional tours in between contracts.

ACabo San Lucas: Looking for a nice hotel with good food in Cabo

My choice in Cabo San Lucas​ would be the Palmilla​. It is a One & Only resort, and I have enjoyed several of their resorts besides the Palmilla, like the Ocean Club  in the Bahamas, the One & Only Reethi Rah​ in... See More

AIbiza: anyone going in june?

Hmm, I do not think you will be alone for long Richard. You will be there right after the infamous Opening Parties at every club including the only club to stay open all year around, the incomparable Pacha Club. Whether you stay in Ibiza Town or San Antonio, know that there... See More

AIbiza: What's the best way to get around Ibiza?

If you are there to party, - DO NOT RENT A CAR. Period! However you can avail yourself of the bus that is there to keep drunks off the road. Bear in mind that drink driving is a big problem on Ibiza. This bus is called the Disco Bus and it is specifically for drunk revelers.... See More