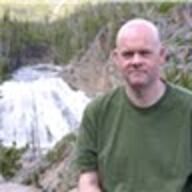 Being raised in a small town in the north east corner of Oklahoma has its advantages, and Adair was a very small town. Good schools, a lake within 20 miles no matter which road you took out of town, and the general small town attitude. I attended that one school from Kindergarten through 12th grade. While there, I earned an Eagle Scout award and began coaching for Special Olympics. I continued to coach the local Special Olympics participants until I graduated College. I found this work to be very rewarding personally, along with my responsibilities as an Assistant Scout Master, I felt I gave a lot back to my community, and of course they supported me as well. One good example of this was graduation from Northeastern State University in Tahlequah, OK. The Scout Troop and town in general rented a couple of busses and I was well represented at the ceremony.
Upon completion of college I moved to California to begin work. I worked on many projects right away. My first was in the Oxnard Area where I worked for the Navy, then I moved to the Las Vegas Area for a while where I worked for the Air Force, then back to Ridgecrest, which is where I was beginning in 1988. This is a Navy town. Ridgecrest exists to support the base at China Lake, and no there is no water there either (think Death Valley). Since I have been employed by the US Military, I’ve worked on submarines, aircraft and RADAR, both ours and foreign. It has been quite an adventure, with some being more open than others. I was last assigned to the Weapons Integration Group for the AV-8B Harrier. This aircraft is a very interesting assignment. We spend the bulk of our time trying to put new weapons on an old aircraft. Keeps work quite interesting.
Later moving into Healthcare, I moved to central Kansas to work for a small hospital, then currently moving to a huge hospital chain in Salt Lake City, UT (Intermountain Healthcare).  Still interesting work, but quite different than the military.  I currently live with my wife, youngest and the two chihuahua.

ALas Vegas: Best route by car with kids from Vegas to LA?

Really depends on what they like.  I always enjoyed going through the park (Death Valley​), then up to the mountains (Whitney Portal​, then down 395/14 to the Lancaster/Palmdale area.  To get there, you go to Pahrump​... See More

ALas Vegas: Best route by car with kids from Vegas to LA?

Really depends on what they like.  I always enjoyed going through the park (Death Valley​), then up to the mountains (Whitney Portal​, then down 395/14 to the Lancaster/Palmdale area.  To get there, you go to Pahrump from Vegas, then... See More

Within an hour or so on either side of Yellowstone National Park​ cell reception is spotty at best, in the park there is no cell towers at all.  Once you get into Idaho​ or if heading east, an hour out of the park into Wyoming​ and... See More

Well, Polly hit all the big ones, so I will have to add some of my favorites, of course Norris Geyser Basin​ is always my favorite, I will see Steamboat Geyser​ erupt one day.  Just above Beryl Spring​ which is... See More

Well, for cost, I normally stay downtown or across 15, both have shuttles that get you to the strip (or sometimes the city bus).  Fremont Hotel and Casino​ and Four Queens Hotel And Casino​ are great choices downtown allowing you... See More

ASpain: What are the best cities in Spain for architecture & culture?

Really, I think Madrid was one that all should see, then Toledo​, you need to see the aquaducts, Seville​Just generally worthwhile and over on the coast Gandia​ and Valencia​.  If you make... See More

AWhere is your favorite place in the US to vacation with your dog?

I think it depends on time, if you only have a day for Yellowstone, then hit Norris Geyser Basin​ and the Old Faithful​ areas, you will miss the falls and the Mammoth​ area, but you will see much of the options... See More