Road trips: They are something of an obsession for Americans (not to mention tourists visiting the States). Our vast continent and wide-open roads are attractive; they make us want to pack up that trunk, throw the dog in the back seat, and take off for horizons unknown.

And now we’ve got even more reasons for you to pack your bags and put rubber to the road.

This, friends, is the ultimate foodie road trip – a route we’ve mapped out based on the Top 100 Places to Eat on Yelp.com. All you have to do is grab your car keys and go.

Click below to explore our recommended route for eating your way across the country. 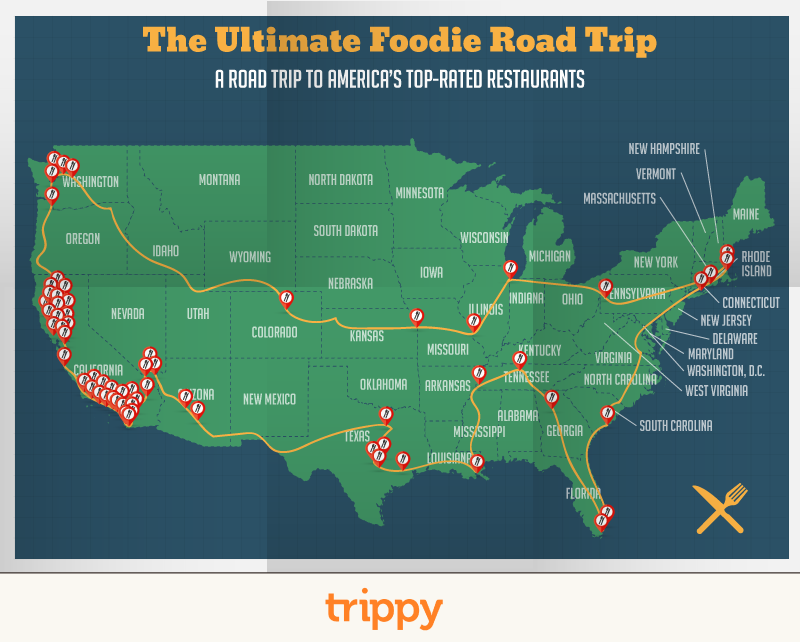 This epic road trip touches down in foodie havens like Southern California, San Francisco, and New York, and it also manages to hit culinary gems in cities you might not expect. St. Louis barbecue, anyone?

Types of Food You’ll Find Along the Way 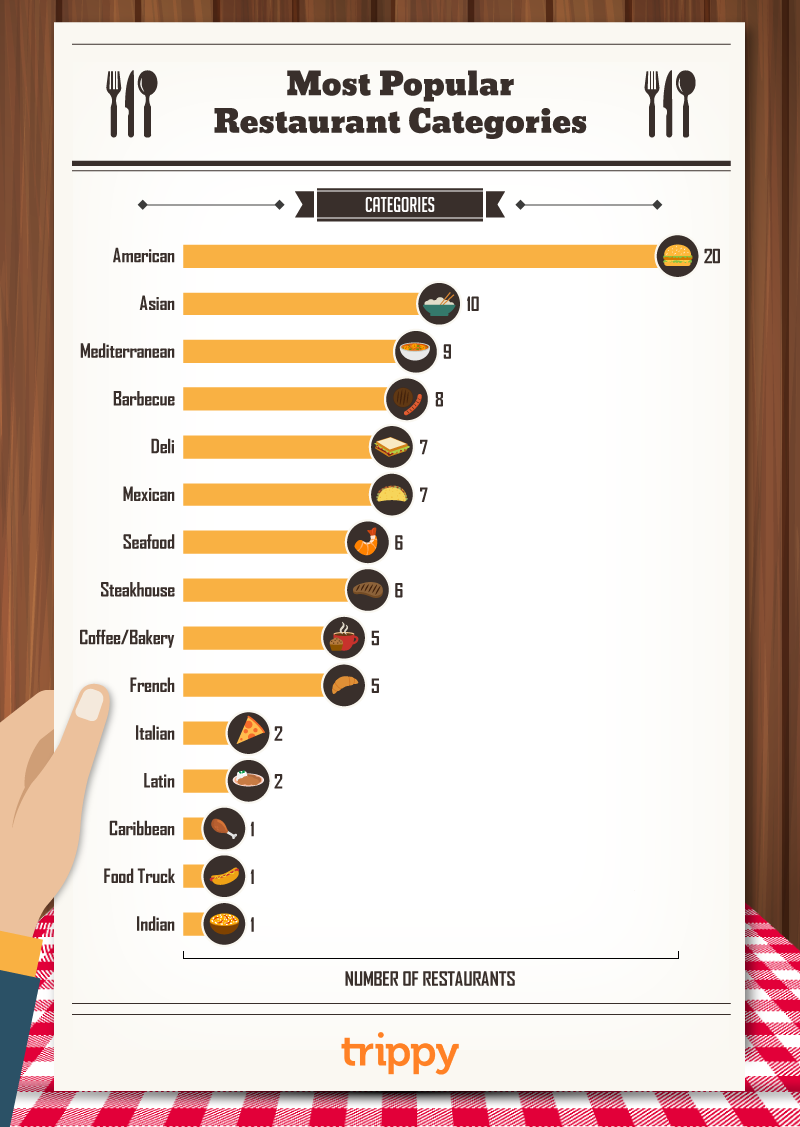 So what kind of foodie delights can you expect to find on this cross-country adventure? The answer is a little bit of everything, including a taco truck eats and some classic French fare.

But the most popular restaurant category – by far – is good ol’ American fare, with 20 restaurants on the Yelp Top 100. Other wildly popular cuisines? Asian, Mediterranean, and barbecue.

Foodie States: Which Have the Most to Offer? 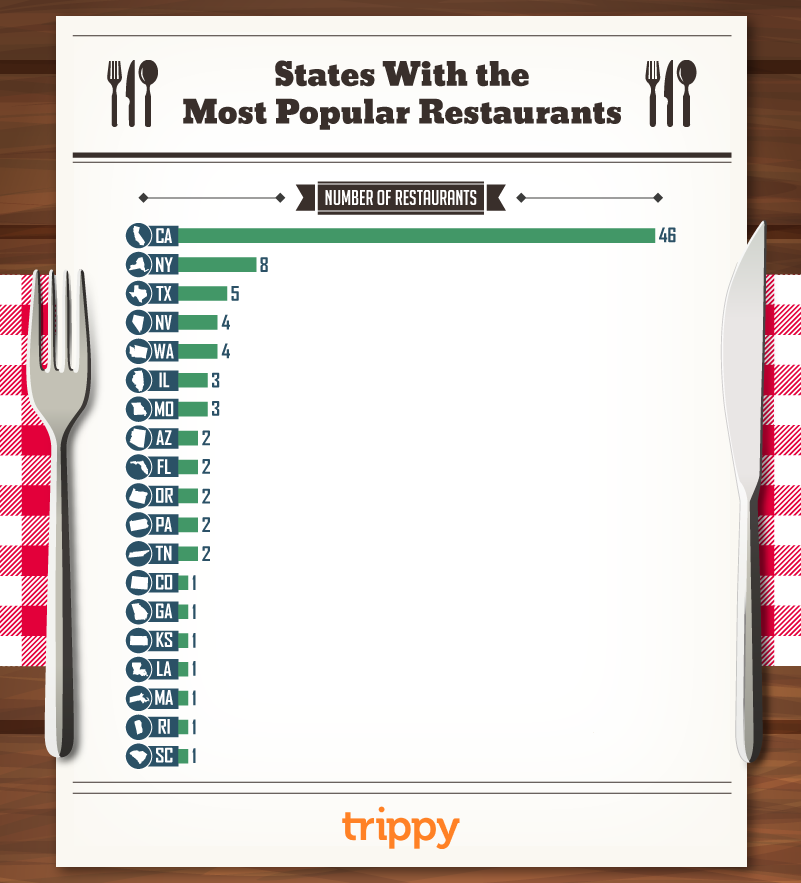 If you can only tackle one state, you should prioritize California; it’s home to nearly half of the Yelp Top 100 – an achievement not to be overlooked. You should also consider New York, another heavy hitter, which houses eight of Yelp’s featured foodie sanctuaries.

And in third place, think of Texas; it’s the home of hearty barbecue, mouthwatering steaks, and the less-expected Asian delights of sushi at Uchi and Japanese farmhouse fare at Uchiko. 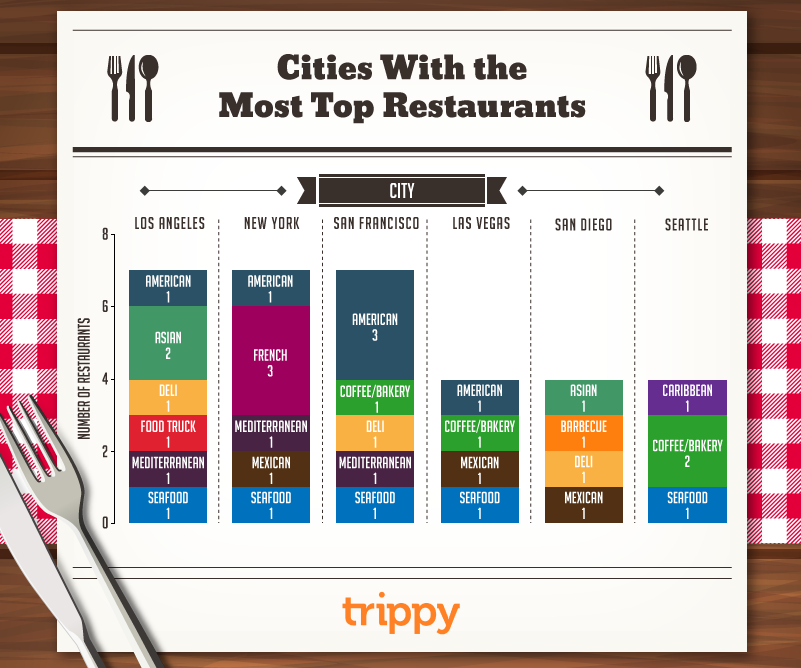 As a state, California has the most Top 100 restaurants to offer … but what cities are also leading the pack?

So What’s This Tasty Tour Going to Cost? 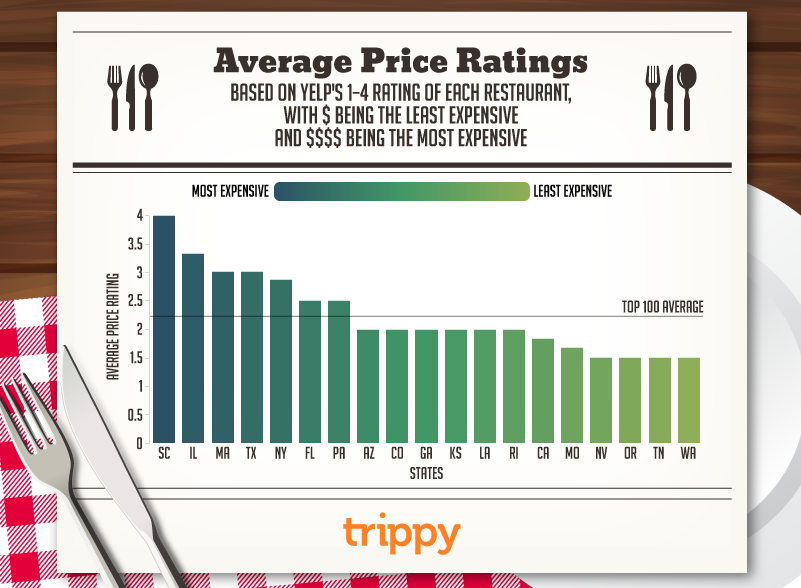 Now it’s time to talk about average costs. Yelp ranks restaurant cost on a scale of one ($) to four ($$$$), with “$” indicating cheap eats and “$$$$” identifying the priciest options.

So how do these Top 100 measure up on the pricing scale? The answer may surprise you. Many of these top restaurants offer affordable dining, with plenty of restaurants – even in glamorous California – ranking two ($$) or less.

Breakfast, Lunch, and Dinner: When Are These Restaurants Open? 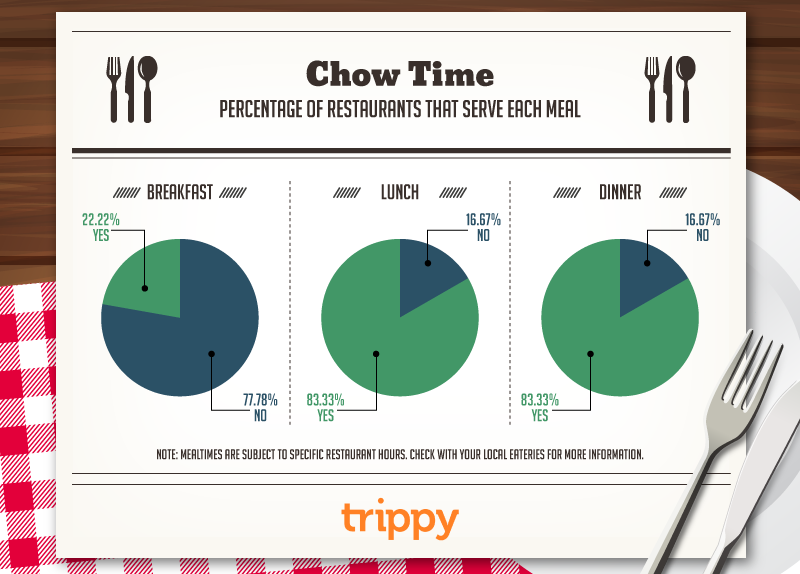 Before you take to the open road with your suitcase securely stowed and your dog thrusting its head out the window with that crazy wind-in-the-face grin, there’s one more thing to keep in mind: Which restaurants are open for which meals?

We pulled this info from Yelp, and it turns out (as you might expect) that the vast majority are open for lunch and dinner, while a smaller percentage cater to the breakfast crowd.

When planning your own eating schedule, of course, do make sure to check each restaurant’s operating hours and days.

What’s left to say, except, “Bon voyage!”? We wish you the best on your foodie adventures, wherever they might take you. And us? We’ll be over here packing our bags.

We partnered with Travelmath.com, who used a custom "Traveling Salesman" algorithm to determine the most efficient path to the restaurants on Yelp's top 100 Places to Eat in the U.S. The reviews are from TripAdvisor.

Addresses were then compiled from Yelp and converted to latitude and longitude via a geocoding tool.

Type of food, price (e.g., number of dollar signs, $$ = 2), hours of operation, and address information were compiled from Yelp.

Hawaii was excluded from our analysis.

Feel free to share the images found on this page freely. When doing so, please attribute the authors by providing a link back to this page, so your readers can learn more about this project and the related research.