It’s the trip of a lifetime – you, the open road, and 196 of the oldest bars in the United States. To prove that drinking and history are a perfect mix, we picked the highest-rated old bars, mapped your ideal route, and calculated your walking, driving, and flying time in a handy interactive feature.

We also looked at the states with the most old bars, ranked closing times, and compiled a list of watering holes with high TripAdvisor ratings. Fueled by your favorite bar foods (and the occasional beverage), you can bar-hop your way around the country. How many historic taverns can you visit during one road trip? There’s only one way to find out. Cheers!

Click the map below to explore the route further. 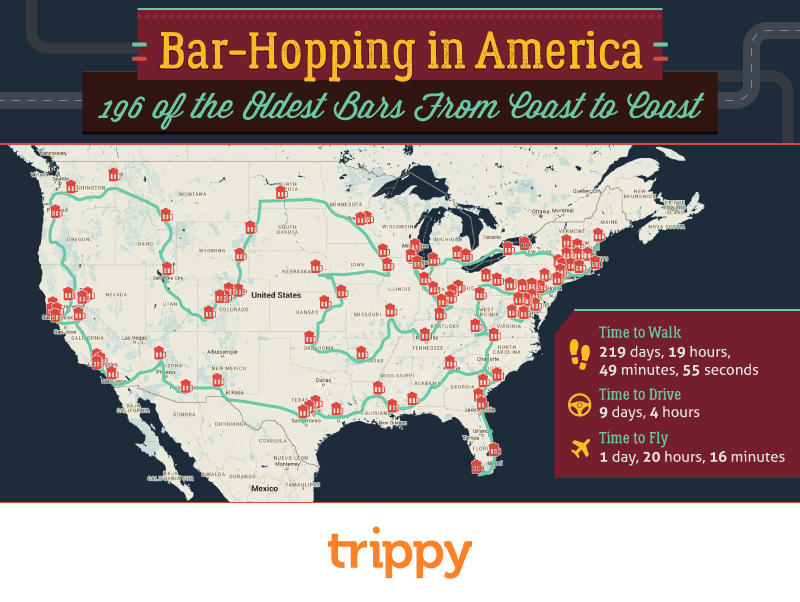 Your mission should you accept it: Trace a path around the country to belly up to nearly 200 of the oldest (and best!) bars around. How long will it take? We crunched the numbers: If you’re walking, over 219 days; if you’re driving, just over nine days; and if you’re flying, a little less than two days.

You’ll get as far north as Spirit Lake, ID, to visit the state’s oldest operating bar – the White Horse Saloon, which opened in 1907. Order a drink, try the tomato soup or made-to-order wings, and prepare yourself for a potential encounter with a spirit who has been known to play tricks.

The farthest west you’ll go is Smiley’s Schooner Saloon in Bolinas, CA, which was established in 1851 during the Gold Rush days. Enjoy live music, craft beers, and an ever-rotating selection of unique liquors. One of the easternmost bars on the trip is Old Yarmouth Inn in Yarmouth Port, MA. Established in 1696, it now offers casual meals in the wood-paneled tavern or local seafood in the dining room. It also may be haunted. 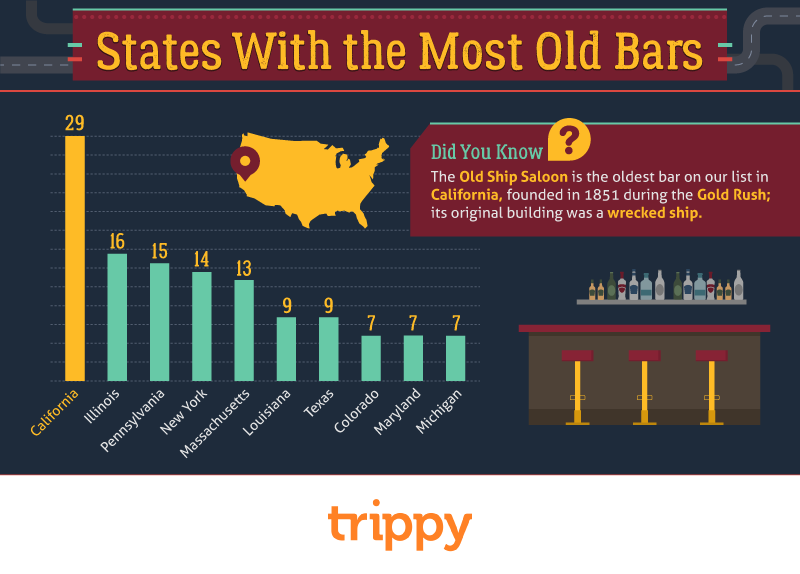 Based on our findings, California tops the list for the largest number of top-rated historic bars – with 29 on our bar tour, it has nearly twice as many opportunities to hold court on a battered barstool as No. 2 state Illinois. Nine are in Los Angeles, six are in San Francisco, and five are in San Diego.

Illinois claims second place with 16 old bars – 15 of which are located in Chicago. The state’s oldest, however, is the Village Tavern in Long Grove, IL. Established in 1847 and in continuous operation since 1849, the tavern is known for its 35-foot mahogany bar – not to mention its selection of beers, wines, and weekly dining specials.

Which other states should you seek out for their abundance of historic watering holes? Pennsylvania has 15, New York has 14, and Massachusetts has 13. Louisiana and Texas each have nine, and Colorado, Maryland, and Michigan each have seven. Michigan is home to Baker’s Keyboard Lounge in Detroit, founded in 1933. Baker’s has hosted some of the most legendary jazz and blues musicians in history including Ella Fitzgerald, Miles Davis, and Nat King Cole. 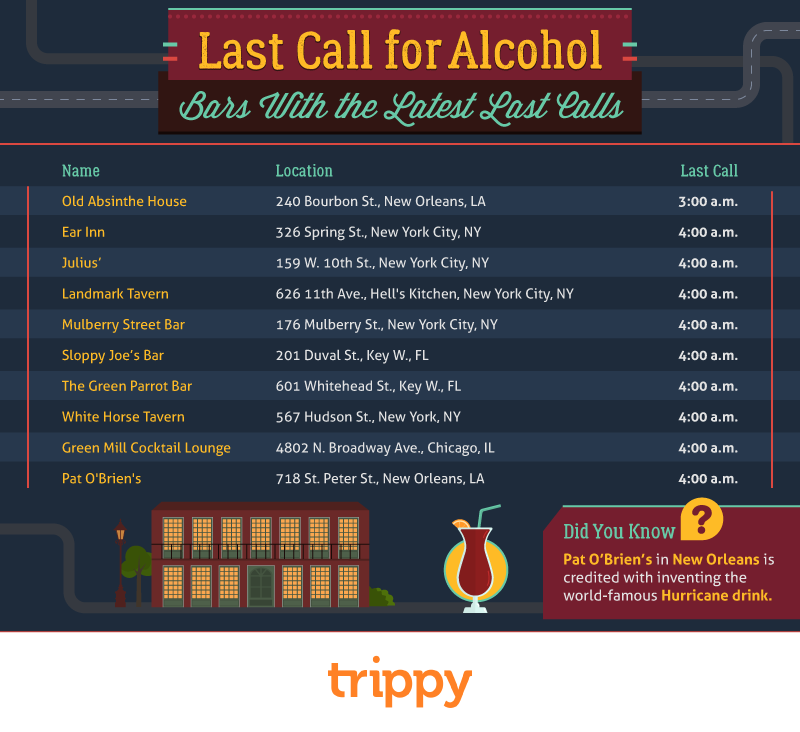 Want to stay out late? The 10 bars above let you party into the wee hours: Nine are open until 4 a.m., and another lets you stay ’til 3. These open-late haunts are located in cities that never sleep: Chicago, New Orleans, New York City, and Key West.

Pat O’Brien’s, where last call is at 4 a.m., is a favorite in the French Quarter of New Orleans. The bar opened in 1933 after the Prohibition, and today it is perhaps known for its specialty drinks – including Hurricanes, which they actually invented.

The Green Mill in Chicago, thought to be the oldest continuously open jazz club in the U.S., is also open until 4 a.m. The well-known spot has been featured in various movies and documentaries. Customers flock to the club for the live music and weekly poetry slams, not to mention the martinis.

At the 1817-born Ear Inn in NYC, enjoy the cheap food, good drinks, conversation, and (sometimes) live country/blues music until the wee hours. In Key West, hit Sloppy Joe’s Bar, a fixture since 1933, for great food, draft beers, and an array of frozen drinks.

One reminder: If you’re out late having fun, don’t drive yourself home. In all of these cities, transportation options abound, whether you prefer taxis or ride-sharing vehicles. 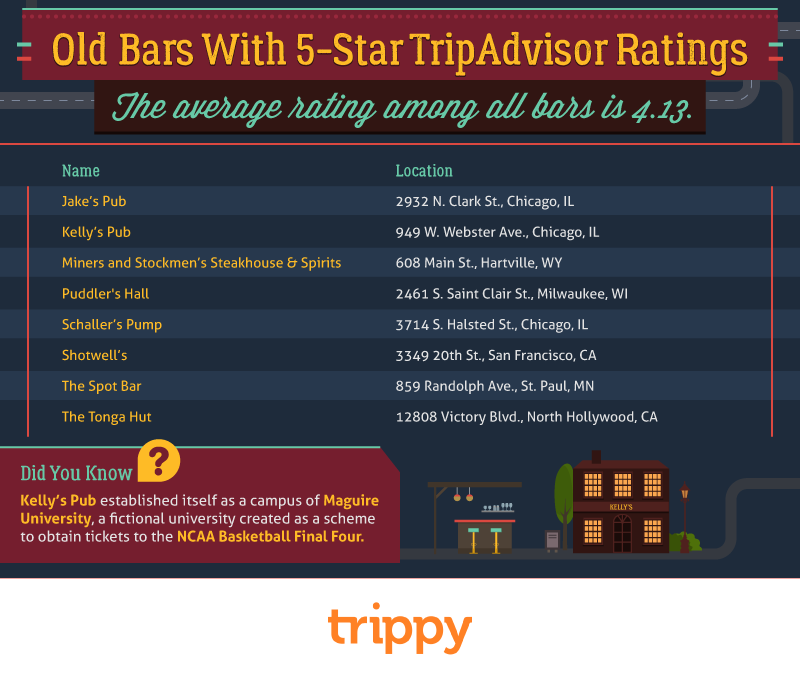 Aside from their impressive age, our list of old bars have a lot going for them. Collectively, the historic establishments earn an average score of 4.13 on TripAdvisor.

Jake’s Pub in Chicago draws rave reviews for its wings and cold beer, served with a side of history and character. In Hartville, WY, Miners and Stockmen’s Steakhouse & Spirits wins over fans with its ribeye steak, friendly staff, and carefully restored building. Kelly’s Pub in Chicago garners praise for its cold drinks, hot food (especially wings), and outdoor seating.

From coast to coast, this country is crawling with old bars boasting cold drinks, amazing food, and colorful histories. With our interactive map as a guide, you can check out as many (or as few) establishments as you’d like, whether by foot, by car, or by plane. Ready to go? Whichever transportation mode you choose, travel safely, never drink and drive – and keep your eyes peeled for lingering ghosts that hark back to the days these watering holes were established.

We partnered with Travelmath.com, who used a custom "Traveling Salesman" algorithm to determine the most efficient path to 196 of the oldest bars in America. Reviews are from TripAdvisor.

Sources can be found on this Link.

Feel free to share the images found on this page freely. When doing so, please attribute the authors by providing a link back to this page, so your readers can learn more about this project and the related research.